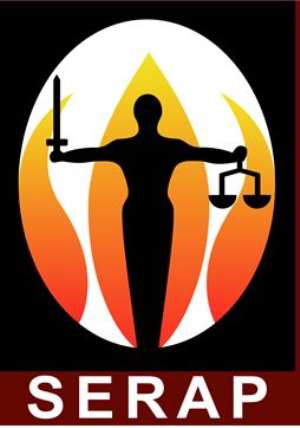 A new report by the Socio-Economic Rights and Accountability Project (SERAP) has revealed how “communities in the Niger Delta continue to live in depressing and deplorable conditions, despite the fact that the wealth derived from these areas is the main economic mainstay for the country.”

According to the report, “The communities in the Niger Delta remain the poorest in the country.”

The 82 pages report launched today at the Radisson Blu Hotel, Ikeja, Lagos, is titled: ‘We Are All Vulnerable Here’: How Lack of Transparency and Accountability is Fuelling Human Rights Violations in the Niger Delta.

The report presented to the media by Dr. Olubunmi Afinowi, Faculty of Law of the University of Lagos, discloses that “The region remains deeply in the grips of squalor, poverty, and environmental degradation.”

The report shows that, “Corruption contributes to poverty and consequential suffering of many people in the Niger Delta. The right of the people to a clean, safe and healthy environment is routinely violated and abused by the government and oil companies.”

According to the report, “Extensive social, economic, and environmental degeneration has largely affected the lifestyles and wellbeing of the people of the Niger Delta. Also apparent is the continued disregard and abuse of the human rights of the people of the region.”

Femi Falana, SAN said at the report launch, “The management of the Niger Delta Development Commission by interim administrators is illegal. The Attorney-General of the Federation and Minister of Justice, Mr. Abubakar Malami SAN should advise President Muhammadu Buhari to urgently reconstitute the NDDC board of directors.”

Falana said, “Since the appointment of interim administrators is unknown to the NDDC Act, all contracts awarded by them are illegal and liable to be set aside.”

Falana also called on “the Federal Government to release the report of the Forensic auditing of the NDDC to enable the oil producing communities to demand accountability from many contractors who collected huge funds and abandoned development projects in the Niger Delta region.”

Among the people who attended the report launch are: Speaker of Cross Rivers State House of Assembly, Hon John Etim; the Chairman of the ICPC, represented by Dr Grace Chinda; and the Executive Secretary of NEITI, represented by Kareem Lamidi, team lead advocacy for NEITI.

The report launch was also attended by Dina Sabi, Second Secretary of the Embassy of the Netherlands in Nigeria; the Director-General, Bureau of Public Service Reforms (BPSR), represented by Mr. Egbe Ekpe; and the Attorney General of the Federation and Minister of Justice, represented by Barrister Raji Rasaki.

Others are: High Chief Eric Barisa; Madam Florence Kayemba, Stakeholder Democracy Network; the Executive Secretary, NHRC, represented by Mr. Saliu Musa; representatives of communities from the Niger Delta; and the members of the media.

All the participants expressed commitment to ensure the full implementation of the recommendations contained in the report.

The research for the report was conducted under the Niger Delta project supported by the Ford Foundation.

The report, read in part: “While the oil and gas upstream operations span the entire Niger Delta region, the empirical study in this research focuses on the Delta, Bayelsa, and Rivers states.”

“The doctrinal study, on the other hand, is more encompassing and examines the challenges and adverse impacts of the oil and gas industries in the host communities and the government’s response mechanisms through the various regulatory and institutional frameworks.”

“The relevant monitoring agencies have not effectively carried out their duties and functions and this has led to a continued disregard for the rights of the people and the need to protect the environment.”

“Corruption is a major factor in the continued degradation in the region. There is a lack of an effective governance and feedback framework to foster interactions between regulators, companies, and communities. This implies a lack of transparency and accountability from the companies and the government to the people.”

“The oil and gas companies receive minimal government monitoring in the conduct of their activities; more troubling is the prevalence of oil theft and illegal mining, and refining of crude oil. Such illegal activities make the region crime prone and increase the vulnerability of the inhabitants of the communities.”

“The communities are continually exposed to food insecurity and health risks. Most of their communal lands, land and water resources have been lost or continually threatened by degradation and pollution.”

“A lot of information about the oil and gas companies, their activities, environmental audits and other relevant information are not available to the public. Such information is often shrouded in secrecy, and where made available, is limited, unclear and provides little or no actual information.”

“PresidentMuhammadu Buhari should publicly recognize and re-affirm that every Nigerian citizen, including oil producing communities, is entitled to economic and social rights, and take steps to ensure constitutional recognition of these rights as legally enforceable human rights.”

“President Muhammadu Buhari should immediately instruct the Ministry of Niger Delta Humanitarian Affairs and other government agencies overseeing the NDDC to immediately publish the forensic report on NDDC conducted in 2021.”

“The leadership of the NationalAssembly should ensure that the relevant committees collaborate to initiate independent public enquiries and fact-finding on how public funds have been spent by MDAs to mitigate the socio-economic impact of environmental pollution in oil producing communities.”

“The leadership of the National Assembly should make public the findings of any such investigations by the relevant parliamentary committees on the use of public funds by MDAs to mitigate the socio-economic impact of environmental pollution in oil producing communities.”

“The leadership of the National Assembly should make public all reports of previous investigations into allegations of corruption in relevant MDAs concerned with the management of issues relating to the impact of environmental pollution in oil producing communities and send such reports to anti-corruption agencies.”