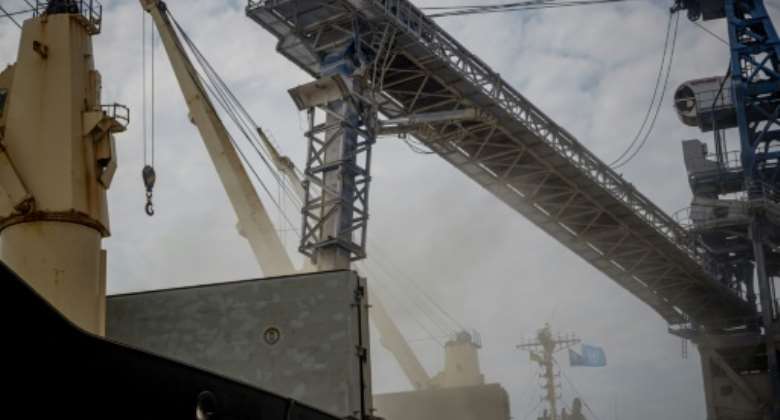 The first UN-chartered vessel MV Brave Commander loads more than 23,000 tonnes of grain to export to Ethiopia in August 2022. By OLEKSANDR GIMANOV (AFP/File)

World leaders called Tuesday for urgent efforts to address global food insecurity, with fears mounting of a disastrous harvest next year due largely to the war in Ukraine.

On the sidelines of the United Nations General Assembly, ministers from the European Union, United States, African Union and Spain met on food shortages which are seen as a key factor in conflicts and instability.

"There is no peace with hunger and we cannot combat hunger without peace," Spanish Prime Minister Pedro Sanchez said as he condemned Russian President Vladimir Putin's February invasion of Ukraine.

"The truth is Putin is trying to blackmail the international community with food," Sanchez said.

The Group of Seven major industrial powers at a June summit in Germany promised $5 billion to fight food insecurity but German Chancellor Olaf Scholz said there was still "great urgency."

"The Russian war of aggression has caused and accelerated a multidimensional global crisis. Countries in the Global South with prior vulnerabilities have been hit hardest," Scholz said.

In his own address on Tuesday, French President Emmanuel Macron said his country will finance shipments of Ukrainian wheat to Somalia which is facing risk of famine.

Ukraine is one of the world's largest grain producers and the Russian invasion sent global prices soaring.

Russia has cast blame on Western sanctions, an assertion denounced by the United States, which says it is not targeting agricultural or humanitarian goods.

Turkey and the United Nations in July brokered a deal between Russia and Ukraine to allow ships with grain to sail through the blockaded Black Sea.

Putin has recently criticized the deal, pointing to shipments that have headed to Europe. US officials say some of the grain is then processed and sent to poorer countries.

"Despite some of the misinformation that continues to come from Moscow, that grain and other food products are getting where they need to go to the countries most in need, predominantly in the Global South," Blinken said.

"It's also helped lower food prices around the world. So it needs to keep going, it needs to be renewed. That is urgent."

Concerns are also mounting on the long-term impacts. A recent report by the Ukraine Conflict Observatory, a non-governmental US group, found that around 15 percent of grain stocks in Ukraine have been lost since the invasion began.

Experts warn that disruptions in fertilizer shipments could seriously impede future harvests around the world.

"It's very clear that the current food supply disruption and the war in Ukraine is having an impact on the next harvest," said Alvaro Lario, incoming president of the International Fund for Agricultural Development.

Mothers wait for high nutrition foods and health services at a camp for internally displaced persons in Baidoa, Somalia, on February 14, 2022. By YASUYOSHI CHIBA (AFP/File)

"There's one or two harvests per year, and already we're seeing that it's going to be devastating for next year," he told AFP, warning that the impact could be "much worse" than Covid.

He called for longer-term action, which would entail billions of dollars of investment, to ensure the stability of food supply chains and to adapt to a warming climate.

"We know the solutions and we have the institutions to make that happen. What is currently lacking is the political will, in terms of the investment," he said.

In a joint report in July, UN agencies including UNICEF and the Food and Agriculture Organization said that between 702 and 828 million people were impacted by hunger in 2021, or 9.8 percent of the world population.

The figure was up by 46 million people from 2020 and by 150 million from 2019, showing the heavy impact of the Covid-19 pandemic on the world's food economy.

UN Secretary-General Antonio Guterres said recently that the world had enough food in 2022 but that the problem was distribution.

If the situation does not stabilize this year, in 2023 "we risk to have a real lack of food," he said.