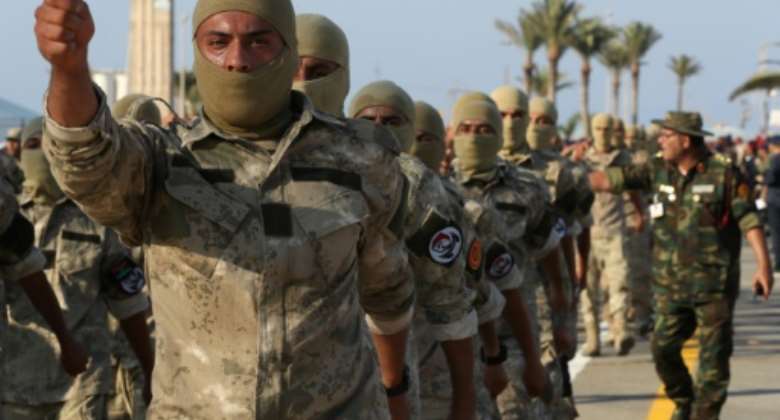 Masked Libyan soldiers take part in a military parade in the capital Tripoli on August 9. By Mahmud Turkia (AFP)

The United Nations on Tuesday voiced "deep concern" over growing tensions between rival Libyan forces, calling for "immediate" moves to calm the situation.

The UN's mission UNSMIL said it was "following with deep concern the ongoing mobilisation of forces and threats to resort to force" by groups vying for control of the North African country.

Libya has been ravaged by repeated conflicts since the 2011 revolt that overthrew dictator Moamer Kadhafi.

But Dbeibah, the interim premier appointed last year as part of a United Nations-backed peace process to end more than a decade of violence in the North African country, has refused to hand over power before elections.

In its statement on Tuesday, UNSMIL warned that "the current political stalemate ... cannot be resolved through armed confrontation."

It called for an "immediate de-escalation" said that "the use of force by any party is not acceptable" and would not lead to international recognition.

Bashagha told AFP last month that Dbeibah's government is "illegitimate", arguing that "its mandate is over and it failed to make elections happen".

On Tuesday, Bashagha's office issued a statement urging "Libyan men of honour" to drop their support for Dbeibah's "obsolete and illegitimate" administration.

That sparked fears of renewed conflict in the capital Tripoli between backers of the two sides.

Bashagha, despite his appointment by the parliament elected in 2014, has been unable to impose his authority in Tripoli, initially ruling out the use of force.

More recently he has hinted that he could resort to force.

Last month, the most deadly clashes between rival groups in Tripoli since 2020 left 16 people dead including a child.

Inflation will remain high till the end of first quarter of ...
37 minutes ago