Keta Sea Defence Project: What Are The Socio-Economic Benefits After 18 Years Of Completion? 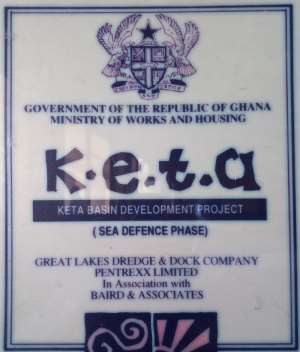 At the turn of the 20th century, Keta was the 3rd largest and most important town in the Gold Coast after Accra and Sekondi-Takoradi. Keta was the administrative head of the Eastern Province of the Gold Coast colony, a centre of excellence, an international commercial hub, a port city, an educational centre of repute, and major centre for the missionary churches. It is of note that the first diocese of the Catholic Church in the Gold Coast was in Keta. Indeed, Keta was a town in its own class, a great pride of Anloland.

Geographically, Keta is a town nestled between the sea (the Atlantic Ocean) and the lagoon (the Keta Lagoon Complex). It was/is a narrow steip/sanbar between the lagoon and the sea. But the beautiful town has a geographic and well as geomorphological disadvantage: it has a sandy coast and lies below see level along most portions of its coast, between 1-3 metres below sea level. This is Keta's weak point that did not help her much as the decades went by.

Surfacecially, Keta is often used to cover all the other settlements which border it with their own individual names, such as Vodza-Adzido, Kedzi, Abutsiakope, Dzelukope, etc. And so shall it be construed in this write up.

From around 1907, the first noticeable signs of sea erosion started showing. By 1924, it accentuated. From 1932 to the 1978, it became clear that Keta may not survive into the 21st century. The 1960s witnessed the construction of the first sea defence system in Keta under the CPP regime.

In early 1980s the sea unleashed its renewed onslaught on Keta. It was now very apparent that if nothing was done, then, the whole town of Keta would be obliterated from the map of Ghana. There was, therefore, the need to call on central government again to do something to save Keta.

The response was heeded to. Government commissioned an Italian firm to design a comprehensive engineering and economic plan to save Keta's remaining land, reclaim additional land and regenerate its lost economic vibrancy. In June 1987, Cooperativa Muratori and Cementisti, the Italian firm which undertook the study and design works, submitted its report to central government. The report was comprehensive. It had an infrastructural component and a socio-economic component. It was an integrated project, according to the report.

The infrastructural aspect had two phases, 1 & 2. There was the need to seek foreign funding for the project. There were initial hitches getting funding. Remember, it was a military government then, and Ghana was well noted for coups d'état in those years and notorious for either cancelling or discontinuing projects when there were change of government, a bad habit that has continued even into our democratic dispensation.

But hope came alive, when we entered into the democratic dispensation. In 1996 Parliament approved a facility for the project. So, the United States' Export-Import Bank (Ex-Im Bank) approved an $84 million long-term loan to enable Great Lakes Dredge and Dock Company, located in Oak Brook, Illinois, USA and their partners, Bird Associates and their local representatives Messrs Pentrexx Limited to build a sea wall and other infrastructure to protect the Keta Beach and Lagoon from erosion and also resuscitate the almost dead socio-economic life of the area.

The project, which was announced in a February 16, 1999 news release, would have far reaching positive impacts on agriculture, fisheries, commerce, coastal infrastructure and living conditions of the inhabitants of Keta and its surrounding areas. The area under consideration receive the most devastating sea erosional attacks in the history of the country and regular flooding of farms from the lagoon and the Volta River. This therefore, necessitated the most urgent political action to save the remaining portion of Keta, once a thriving and vibrant commercial hub in colonial Gold Coast and securing the socio-economic livelihoods of the whole Keta Lagoon Basin. The Keta Basin Integrated Development Project was thus born.

Keta Sea Defence Project (KSDP), as designed, was supposed to be a part of the Keta Basin Integrated Developmemt Project (KBIDP), a physical, infrastructural, social and economic rehabilitation or regeneration project.The Project as finally executed, was/is therefore, a good physical infrastructural project BUT a bad socio-economic investment, as the latter aspects were left out. My reasons for saying so are not far-fetched:

One, the original project involved sea defence groynes, flood control, access road, land reclamation for housing and agricultural development, aquaculture industry, fishing harbour, chemical industry and tourism facilities. Two, other aspect that was supposed to be the phase 2 of the project was the supposed beach nourishment between Keta and Abutiakope area, and the reclamation of about 400 hectares of land on the lagoon side from around Keta Anlo State School area to Vui Torkor Area was not done too.

The KSDP which was supposed to be the panacea to Keta's socio-economic problems brought on her by the constant sea erosion for over 90 years (from 1907 till 1999) failed to achieve the other purposes. If the KBIDP were executed as originally designed, it would have made Keta great again: industrial salt mining, chemical industries, aquaculture, agriculture development, tourism, water transport, fishing harbour, housing, etc. KSDP is therefore a good project but a bad investment, an investment without much socio-economic returns. This has made Keta to remain poor 18 years after its completion. The people of Keta District which included current Anloga District then and beyond got the KSDP as against KBIDP. This single political mistake or negligence has cost the people of Keta an economic misfortune of a lifetime. The big question is: Na Who Cause Am?

In the end, the $84 million sunk into the KSDP between 1999 and 2004 served only to protect the remaining portion of an eroded town but miserably failed to resuscitate, regenerate and rehabilitate the socio-economic life of once a thriving and economically vibrant district. Indeed, after the completion of the project, what was given to Keta District was an 8.3 km of causeway between Havedzi and Keta, a flood control bridge at Kedzi, six groynes/armor block walls between Hlorvi and Keta, a coastal revetment around the Fort Prinzenstein area, about 108 hactares of reclaimed land between Kedzi and Keta, a construction site building at Havedzi, a staff quarters at Weta, an 8.3-km long, eight-metre wide and sixteen-metre deep dredged trench/canal inside the lagoon.

Folks, eighteen good years after the completion of the project, Keta is yet to reap the socio-economic benefits of a capital project. The big and hard questions we must always ask are: why were the phase 2 and the socio-economic component of KBIDP not done as part of the project? Were political, local and community leaders aware of this? Were Keta denizens aware? Who is to answer? Who is to be blamed? Hard questions indeed.

It is not too late to remedy the negligence. Urgent steps must be taken Keta, in association with the planned Keta Port or Harbour, to incorporate those aspects of the KBIDP which have been shelved. If this is not done, the port when constructed will not benefit very much the mass of the people in the Keta Basin. The port was envisaged as only a part of the KBIDP.