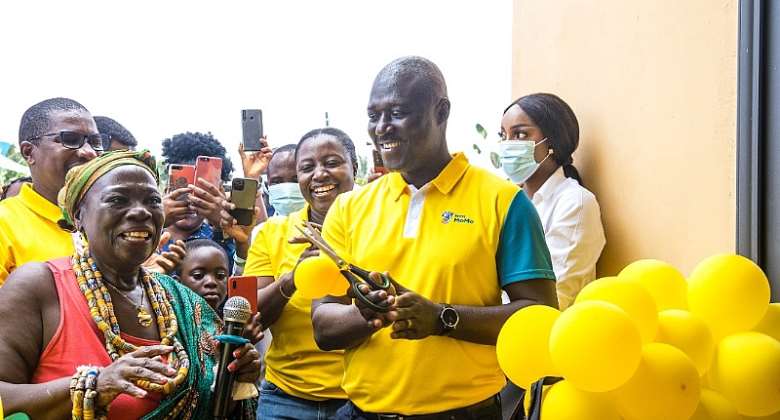 MobileMoney Limited (MML), a wholly owned subsidiary of Scancom PLC has fulfilled its promise to Madam Rita Nhyiraba Tetteh, the woman who played the lead role in the first mobile money advert.

At a short ceremony on Tuesday, August 17, a newly-built two-bedroom house at Dobro has been handed over to the popular Minsa' Aka lady.

In 2009, she was among the cast for the first ever mobile money advert which helped to educate Ghanaians on the benefits of using mobile money at a time the service had not been well accepted.

Through that advert and many other activations she led, Ghanaians began to accept the service to the level where it has become the preferred choice of almost every mobile user in the country.

Three years ago when MobileMoney Limited marked the 10 years anniversary of MoMo, a promise to gift a two-bedroom house to Madam Rita Tetteh was made.

It is in fulfillment of that promise that the building which costing over GHS300,000 has been presented to the Minsa' Aka Lady.

Speaking at the handing-over ceremony, Chief Executive Officer (CEO) of MobileMoney Limited, Mr. Eli Hini recounted the many roles Madam Rita Tetteh played over the years, noting that it enormously helped drive MoMo to where it is today.

“In view of the success chalked over the years, Mobile Money decided to honor all stakeholders who played very critical roles in the MoMo journey during our 10th Anniversary celebrations. At special stakeholders’ awards night, plagues and certificates of honor were presented to all stakeholders. However, we chose to handle Madam Rita’s contribution differently by engaging her to find out what will be most precious to her, and she told us she needed a permanent place of abode.

“Mobile Money Limited decided to honor the request after she sent us the plan of the type of facility she wanted. Today, we are happy to honor our promise and present this 2-bedroom house worth over GHC 300,000.00 to Madam Rita Nhyiraba Tetteh.

“On behalf of Mobile Money Limited, MTN Ghana, and the rest of the MTN Group, we would like to thank you, Madam Rita, for lending us your image and voice on this successful journey. This is to recognize you and make you feel a part of our success story.! God bless you,” Mr. Eli Hini said.

The CEO of Mobile Money Limited further urged Madam Rita to take good care of the facility and observe a good maintenance culture for the facility building to last long.

On her part, Mama Rita Tetteh who broke down in tears of joy expressed her profound gratitude to MobileMoney Limited and MTN Ghana for making her part of the success story of MoMo.

She thanked MobileMoney Limited for gifting her the two-bedroom house and prayed for God’s continuous blessing to ensure the business grows to become bigger than it is today.

“I’m very grateful to MTN. What they have done for me is overwhelming. Today look at where I am. Since I started working with you, you have never turned your back on me. Anytime I need something and I come to you, you do it for me. God bless you for you to continue growing,” an emotional Madam Rita Tetteh expressed.