By Hector Boham, CEO and Co-Founder of CAFAC
Article 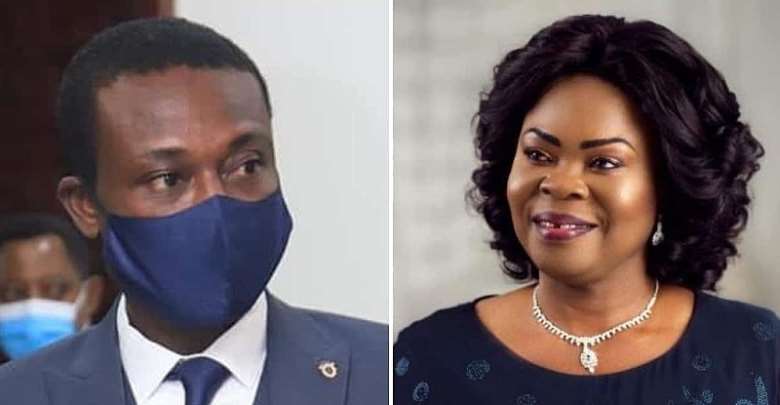 We woke up on Wednesday, August 10th 2022 to rather disturbing news that Ms. Eunice Jacqueline Buah Asomah-Hinneh a member of the Council of State who also doubles as a member of the of the Board of Directors of the Ghana Ports and Harbors Authorial (GPHA) has used her position of influence to exact a favorable decision from the Customs Division of the Ghana Revenue Authority(GRA) leading to a reduction in taxes liability to her benefit.

This finding was the direct result of an investigation conducted by the Special Prosecutor into the operations of the Ghana Ports Authority (GPHA).

A deputy Commissioner in charge of operations Joseph Adu Kyei was cited by the OSP for issuing what it described as an unlawful customs advance ruling. This according to the report reduced the benchmark values of the goods imported by Labiance Limited translating to reduced tax obligation the company to the state.

The OSP was very emphatic in drawing a straight line from the advance tax ruling to the influence and position of Ms Asamoa Hinneh as the Chief Executive Officer of Labianca Limited and most importantly a member of the Board of Directors of GPHA. She is also a member of the Council of State. Part of the report read “The OSP finds that there is strong evidence to suggest that Mr Kyei decision to issue a customs advance ruling for the applicant, Labianca company was procured through influence peddling or trading of influence by Ms Asamoah-Hinneh………….”

Commenting on and advocating against corruption and corruption related offenses in Ghana is very exhausting. There is always something going on. Its incessant, back to back and unrelenting. Anti -Corruption warriors like my organization sometimes face the temptation of giving up - but this fight is not for the weary and when the going gets tough, the tough has to get going.

As a spokesperson for CAFAC - an anti corruption educational establishment dedicated to education, training and capacity building I wish to shed some intellectual light on the issues involved in this case, examine the deleterious effects on Ghana and proffer some solutions going forward.

The first issue is influence peddling. Influence peddling is the act of promising or giving a benefit or payment to a person who has real or potential influence on the decision making of a public official for the benefit of a third party.

The second issue is that of conflict of interest. A conflict of interest occurs when an individuals personal interests - family, friendships, financial or social - could compromise his or her judgment, decisions or actions in the workplace for marketplace.

Finally overarching both influence peddling and conflict of interest is the issue ethics. Association of Certified Fraud Examiners (ACFE ) which is the mother organization of CAFAC takes ethics very seriously. Acting ethically is important in every profession, but its particularly important for fraud examiners. Ethics has to do with good and bad. A right and wrong way of doing things. When the Asamoa-Henney case is put under the microscope of right and wrong it becomes abundantly clear that something fundamentally wrong happened. Whatever happened clearly fails the smell test, which is one simple rule of thumb to use as a measuring yardstick to assess fraud and corruption incidents and scenarios. So this Ms Henney who is the owner of this company(Labianca) is also a member of the board of GPHA which has oversight responsibility for the work of Mr Kyei who issues a questionable favorable decision for Ms Henney’s company (She is the CEO) - a decision which subsequently has to be reversed and the liability waiver reinstated and exacted.

A list of all the deleterious effects of such influence peddling and conflict of interest on nation building is not far fetched but let us focus on the most significant which is the fact that Ghana lost much needed tax revenue - which in turn impacts negatively on the development and management capacity of the country. Ability to provide social amenities, pay for the administration of the country, meet financial obligations and even the defence of the country are all on the line and in the current period of austerity this is very damning. In fact it is a breadth of fresh air to note that the OSP was able to retrieve the lost tax revenue. We must shout Kudus!!! for a job well done. We need more of such!!!

As I bring this article to a conclusion let me humbly proffer a few solutions.

First conflict of interest is proscribed by the 1992 constitution of Ghana in Article 284 which states “A public officer shall not put himself/herself in a position where his personal interest conflicts or is likely to conflict with the performance of the office.”

Also Act 29 of the criminal Code makes it a crime for a public officer to put himself or herself in situation where their personal interest will conflict with the performance of their duty.

So what is needed is strict and better enforcement of the constitution and the laws of Ghana.

In addition to enforcing this legal regime, every work place should have policies and procedures covering influence peddling and conflict of interest. The policies should be clear and unambiguous and in many instances specific situations should be spelt out and affected individuals made to know exactly what to do in each scenario.

Second people should be given competent training and education to understand fully what is involved in conflict of interest and influence peddling. That awareness is a preventive control for these transgressions.

Third people should be encouraged to declare their interests and put them out in the open. The best medicine for corruption is sunshine - transparency. When that happens it takes away all the negative connotations of conflict of interest. Management then has to make a determination on the conflict of interest. Whether to assume the risk or take steps to do away with it.

Finally when investigations unearth conflict of interest and influence peddling, the sanctions should be swift and decisive to serve as a deterrent. And in this regard we join the call by Anti-Corruption Campaigner Vitus Azeem that the President of the republic of Ghana, His Excellency Nana Addo Dankwa Akuffo Addo should request the resignation of Ms Asamoa.

Only a fool will think boos at Akufo-Addo was political mast...
20 minutes ago

My wealth exaggerated; it’s crass to define me by my wealth ...
55 minutes ago