Blinken says backing for armed groups in DRC must 'cease' 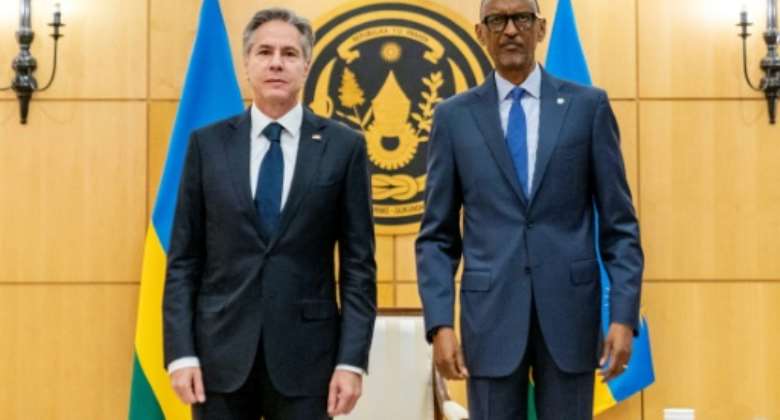 US Secretary of State Antony Blinken said Thursday that support for armed groups in the Democratic Republic of Congo must cease, as he held talks with Rwanda over accusations it is backing rebels in the troubled country.

Blinken also said he had voiced "serious concerns" about human rights during a meeting with President Paul Kagame, and raised the high-profile case of imprisoned "Hotel Rwanda" hero Paul Rusesabagina.

The top US diplomat was in Kigali on the final stop of a three-nation African tour that follows a swing through the continent by Russian Foreign Minister Sergei Lavrov.

Blinken arrived from the DRC, where a resurgence of fighting in the long-volatile east has destabilised relations with neighouring countries.

Rwanda is accused of supporting the M23, a mainly Tutsi Congolese militia which resumed fighting last year after laying mostly dormant for years.

Kigali has repeatedly denied the allegations, which have soured relations with President Felix Tshisekedi's government in Kinshasa.

Kagame's government in turn has accused Kinshasa of supporting Democratic Forces for the Liberation of Rwanda (FDLR) -- a Rwandan Hutu rebel group in the DRC that Kigali views as a threat.

"Our position is clear: support for any armed group needs to cease. It is not a question of one group against another," Blinken said at a press conference with Rwandan counterpart Vincent Biruta.

"My message to President Tshisekedi and President Kagame is the same: any support or cooperation with any armed group in eastern DRC endangers local communities and regional stability and every country in the region must respect the territorial integrity of the others."

An unpublished independent investigation for the UN, seen by AFP last week, said Rwandan troops had attacked soldiers inside the DRC and aided the M23, which has captured swathes of territory in eastern DRC in recent months.

Biruta declined to respond directly to Blinken's comments that the reports were "credible", saying the "root problem" of the FDLR needed to be tackled to reach a lasting solution in eastern DRC.

Ahead of his Rwanda trip, Blinken faced calls from campaigners and the opposition to confront the government over its poor human rights record.

Kagame has effectively ruled with an iron fist for nearly three decades, ever since his rebel army stopped the 1994 genocide which left some 800,000 mainly ethnic Tutsis dead.

"As I told President Kagame, we believe people in every country should be able to express their views without fear of intimidation, imprisonment, violence or any other forms of repression," Blinken said.

"I underscored our concerns about the lack of fair trial guarantees provided to (Rusesabagina)," a fierce Kagame critic who was sentenced to a 25-year prison term last year on terrorism charges.

In May, the US State Department said Rusesabagina -- a US permanent resident -- had been "wrongfully detained".

US Secretary of State Antony Blinken visited the Kigali Genocide Memorial during his visit to Rwanda. By Andrew Harnik (POOL/AFP)

Then a Kigali hotel manager, Rusesabagina is credited with saving hundreds of lives during the genocide. His actions inspired the Hollywood film "Hotel Rwanda."

The 68-year-old has been behind bars since his arrest in August 2020 when a plane he believed was bound for Burundi landed instead in Kigali.

Biruta was defiant when asked if Rwanda would free Rusesabagina, saying he will "complete his punishment".

"Those thinking that Rwandans will one day wake up to hear that he has been released because of external pressure from other countries; that will not happen."

In a statement issued to coincide with Blinken's visit, Rusesabagina's family called again for his release on humanitarian grounds, saying his health was deteriorating after more than 700 days behind bars.

Human Rights Watch on Monday had called on Blinken to take Rwanda to task over rights abuses including crackdowns on opponents and civil society.

"Blinken has to ask our government to open up political space to everyone who wants to be active in politics," said Ingabire, who spent six years in jail on terrorism charges.