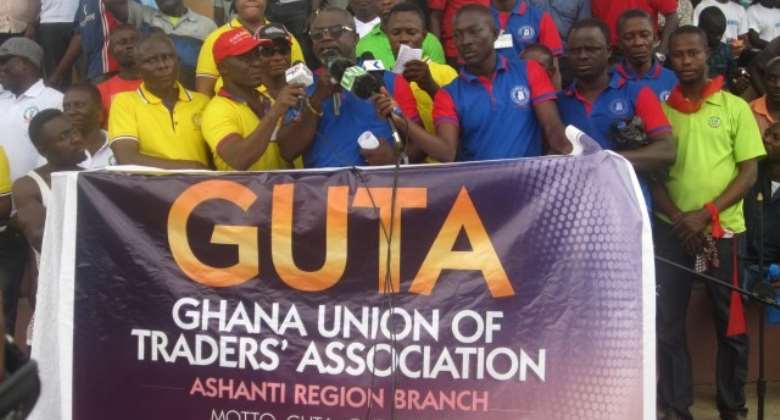 The Ghana Union of Traders Association (GUTA) has denied threatening to embark on a massive demonstration against the Akufo-Addo lead government over the free fall of the Ghana cedi.

According to them, protesting against government in these trying times will not change the fortunes of the economy.

Major media portals in the country on Tuesday August 8, 2022, reported that the union had threatened to protest over the constant falling of the cedi against the dollar.

But speaking on the Kumasi-based OTEC FM's breakfast show, Nyansapo, President of GUTA, Dr Joseph Obeng said they have no intentions of protesting over the free fall of the local currency against major trading currencies.

He added that although traders are in fear that their business will collapse if the cedi keeps depreciating, they as GUTA believes brainstorming for a solution is much better than protesting.

Dr Obeng however outlined some measures to be considered by the government in addressing the problem.

He called on government to as a matter of urgency reconvene the Foreign Exchange Committee that was set up a few years ago by the Finance Ministry which comprises all relevant stakeholders, to help find a pragmatic solution to the cedi problem.

The Union also called on the government to check the unscrupulous activities of some foreign traders which affect the local currency negatively.

"Allowing foreigners into the retail trade and wholesale sectors of the economy will not help this country, but rather defeat the action plan set for the implementation of 1D 1F, AfCFTA and the general industrialization in Ghana,” he told the programmer’s host Captain Koda.

He continued, “We also want to remind the Government that the big-time institutional importers, especially, those who serve as conduits for dumping goods mainly from China are the culprits.”