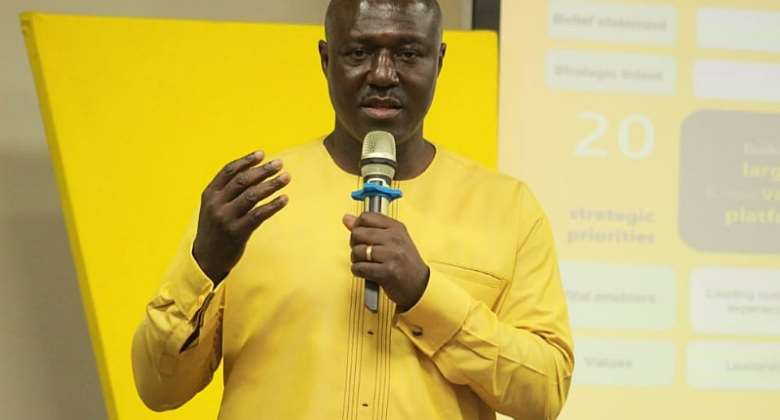 Government received a total of GH¢3.1 billion in revenue from the mobile telephony giant, MTN Ghana in 2021.

The amount which is key in contributing towards the national economy and development constitutes GH¢2.54 billion in overall taxes, which is 4.4 percent of total national tax revenue and GH¢119 million as National Fiscal Stabilisation Levy (NFSL), representing 18 percent of overall NFSL paid in Ghana.

According to Eli Hini, Chief Executive Officer (CEO) of Mobile Money Limited, a subsidiary of MTN Ghana, payment of such revenue is a testament to the company's commitment to the improvement of the national economy and national development.

He said, since “we're a good corporate citizen,” the company will continue to play its role as a key partner in achieving the aspirations of the country.

Mr. Hini stated this in Ho, the Volta Regional Capital during the 2022 edition of the MTN Editors Forum and Interaction with Stakeholders.

He added that apart from revenue payment, the company is providing “500,000 plus jobs through its ecosystem of partnerships and suppliers alone.”

These partnerships and suppliers constitute 897 local suppliers out of the total active supplier base of 1,114.

This means that about 78 percent of the supplier base of the company is based in the country (local).

Furthermore, out of a total spend of GHS3,201,552,901 on supplies in 2021, 75 percent was spent on local suppliers; thus the company spends heavily locally as its way of improving the local value chain and expertise.

Mr. Eli Hini said being a market leader goes with greater responsibility and expectation. To this end, the company is committing $ 1 billion to expand and improve network coverage and service quality nationwide, especially in rural and underserved areas from now to 2025.

Specifically, the investment will provide rural telephony sites and extend the network to some 398 rural areas.

Currently, all 260 District capitals in the country have been covered with the Fourth Generation (4G) network. In addition to this, the company will be “rolling out 400 new sites while some 746 would be upgraded to 4G to ensure that superior services are provided to our customers.” He revealed.

The investment is also targeted at maintaining network leadership by 2025 in line with Ghana's digital drive.

Mr. Hini lamented that despite the huge investments, fibre cuts remain a major challenge to the operations and network quality of the company.

This year, fibre cuts have increased from 819 in January to 939 in May 2022 resulting in 11 percent of traffic impact monthly. The cuts were attributed to road construction and private development activities.

He, therefore, appealed to the media to assist in educating the public on fiber cuts even as they continue to engage contractors and other key government agencies to ameliorate the situation.