What a joke, how can you appoint Kwabre East MP as Deputy Gender Minister who has been declared 'persona non grata' — Social media reacts 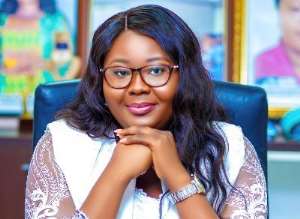 The appointment of Hon. Francisca Oteng Mensah, Member of Parliament for Kwabre East, as the Deputy Minister for the Gender Ministry, has caused stir on social media.

According to many, particularly a Twitter handle named Saint Chevna, the constituents of Kwabre East in the Ashanti region have declared their MP persona non grata.

He noted that the Member of Parliament has been missing from the constituency for a long time.

The netizen added, "Kwabre East people can't even find their minister and have accepted that they don't have an MP. But Akufo-Addo sees her as the best person to be a deputy minister.

“Says a lot about this government.”

According to the netizen’s assertion, history is likely to repeat itself at the Gender Ministry as the newly appointed Deputy Minister is likely to follow Adwoa Sarfo's suit.

Another netizen, Yaw Nti, suggested that the Ministry be left in the hands of Hon. Cecilia Abena Dapaa to reduce the number of ministers in this government.

“To lessen the number of ministerial appointments—which this president just loves making—I would have preferred that Mrs. Dapaah continues in her current role as a substantive employee while her current ministry is eliminated and moves to the housing ministry,” Yaw Nti wrote.

This comes after a press statement issued and signed by Mr. Eugene Arhin, Director of Communications Office of the President, and copied to Modernghana News on Tuesday, August 2, announced Hon. Francisca Oteng Mensah as Minister and Deputy Minister-designate to oversee the affairs of the Gender Ministry.

The release reads “The President of the Republic, Nana Addo Dankwa Akufo-Addo, in accordance with article 78 of the Constitution, has appointed the Deputy Minister for Gender, Children and Social Protection, Hon. Lariba Zuweira Abudu, the Member of Parliament for Walewale, as Minister-designate for Gender, Children and Social Protection. Her appointment is subject to the approval of Parliament.

It adds “Pursuant to article 79 of the Constitution, President Akufo-Addo has also nominated Hon. Francisca Oteng Mensah, Member of Parliament for Kwabre East, as Deputy Minister designate for Gender, Children and Social Protection, subject to the approval of Parliament.”

With this, “The President is hopeful that Parliament will expedite the approval of his nominees for this important Ministry, so they can assist in the effective delivery of his mandate for his second term in office.”