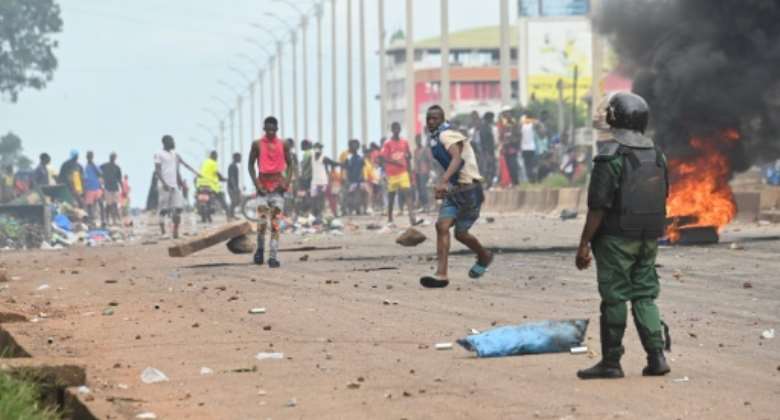 Clashes broke out Thursday morning between young demonstrators and the police. By CELLOU BINANI (AFP)

Protests against Guinea's junta and its handling of plans to return to democracy brought the capital to a standstill Thursday, with organisers claiming that one person was killed.

The protest, planned last week, began ahead of comments by the chair of a regional bloc who claimed to have persuaded the junta to shorten its timeline for a return to democracy. The junta have not confirmed his comments.

The National Front for the Defence of the Constitution (FNDC) said one person had died after being hit by a bullet in the Conakry suburb of Hamdallaye, while several others were injured.

The FNDC is an influential political coalition that had called the demonstrations to denounce the junta's "unilateral management" of the return to civilian rule after it seized power in 2021.

Authorities have not confirmed the death.

The public prosecutor on Thursday instructed prosecutors in several areas to take immediate legal action against the organisers of the demonstration, which was banned.

The FNDC has accused the military leaders of "systematically refusing" to establish a "credible dialogue" to define the terms of the transition.

The former ruling Rally for the Guinean People (RPG) and the National Alliance for Change and Democracy (ANAD), another coalition of parties and associations, then called on their supporters to join the demonstrations.

"I was in Conakry with the president of the commission (of ECOWAS) to make the military junta understand the decision of the summit of heads of state that the transition cannot exceed 24 months", Embalo said.

"They had proposed 36 months, but we succeeded in convincing them," he added.

But Ousmane Gaoual Diallo, a Guinean minister and spokesman for the transitional government, told AFP that "neither the government nor the presidency confirm this information about the duration of the transition in Guinea".

Clashes broke out Thursday morning between young demonstrators and the police in several areas seen as opposition strongholds in the capital, an AFP reporter said.

Most parts of the city centre remained calm, but activity nonetheless ground to a halt.

The Boulevard du Commerce, a major roadway usually full of people, was almost deserted by midday.

"We are delighted with the success of our call to demonstrate -- it was perfect," Ibrahima Diallo, the FNDC's head of operations, told AFP.

"The city has been quiet everywhere, the administration is paralysed -- it's been a great success for us."

Colonel Mamady Doumbouya, who overthrew President Alpha Conde last year, has pledged to hand over power to elected civilians within three years. But regional powers have rejected this timeline.

The junta in May banned any public demonstrations that could be construed as threatening public order.

The junta in May banned any public demonstrations that could be construed as threatening public order. By CELLOU BINANI (AFP)

The FNDC had announced protests for June 23 but later called them off, indicating they were prepared to give the transitional government a "chance" and start dialogue.

But their patience snapped after a meeting with the authorities that the FNDC slammed as a "parody".

It denounced the "solitary and authoritarian conduct of the transition" and its "serious attacks on fundamental rights and freedoms".

Three FNDC leaders were arrested on July 5, provoking violent demonstrations that were some of the first since the junta seized power.

All three were released after being found not guilty of contempt of court over comments they had posted on social media criticising the prosecutor's office and the military-appointed parliament.