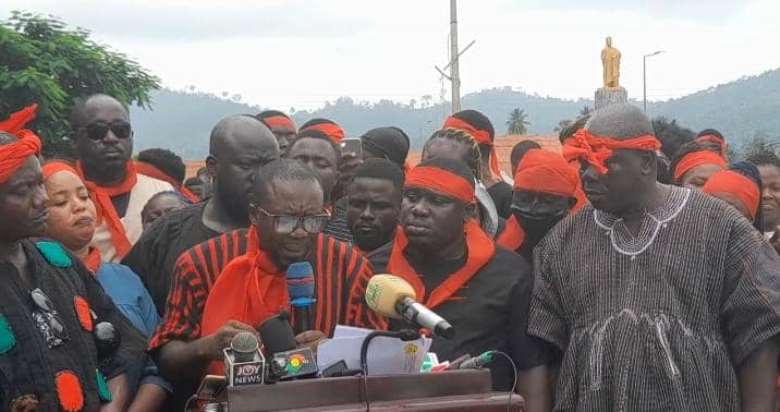 The Okyeman Youth Association has registered displeasure at KOANS Estates Solutions for acquiring lease lands they describe as illegal.

The youth group led by its President, Archibald Ntiri-Acquah, says it is only Okyenhene Osagyefo Amotia Ofori Panin II, who has the sole right to lease lands under the stool lands regulations.

At a press conference in Kyebi, the youth demanded that the private developer produces receipt of payment of the lands within 48 hours or face legitimate confrontation.

KOANS Estate acquired an 8,000-hectare land on lease around the Nsawam area from two families – Mankata and Quansah – in Accra.

But the youth group says the procedure for the lease is fraudulent, null and void.

“His claim of ownership, based on an alleged sale of his land to the Mankata and Quansah families by the Apedwa stool, is fraudulent and same is illegally untenable. The Okyeman is the immemorial allodial owner of all lands in the Akyem Abuakwa, thus per the record of the Ofori Panin, there has been no evidence of any land transaction with Mankata and Quansah families.

“All the claims by Mr Kofi Anokye are a public admission of fraud and deliberate misrepresentation of facts.”

The Okyeman Youth Association ’s press conference stems from recent claims by Mr. Kofi Anokye, a private estate developer, to the effect that he has acquired about 8,000 hectares of Akyem Abuakwa lands from the Mankata and Quansah families.

They served notice to the the private estate developer not to set foot at Okyeman for his personal safety following his recent attacks on the Okyenhene.

He has also been cautioned to refrain from his continued public assault on the dignity of the Ofori Panin Stool.

“OYA wants to state unequivocally that it will be unable to restrain its members from their legitimate confrontation to the theft of Akyem Abuakwa lands which was won by blood and sweat of our ancestors,” Archibald stressed.