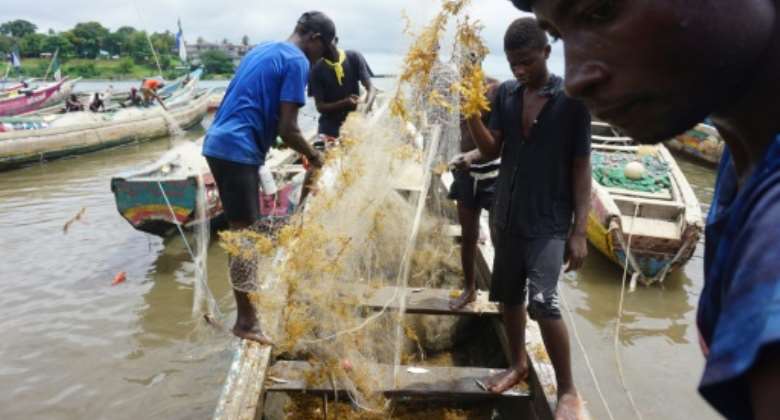 A mass of brown seaweed has for weeks choked the coastline of Sierra Leone's capital Freetown, damaging fishing gear and disrupting tourism in a country otherwise known for its white-sand beaches.

The West African state has experienced the phenomenon several times in the past, but local people say the problem seems far worse this year.

"There is an unprecedented deposit this year," Amidu Kamara, a fisherman at Freetown's Tambakula wharf, told AFP.

Freetown's Lumley Beach is normally packed with young people at the weekends, but nowadays it is desolate. By Saidu BAH (AFP)

"We have to move from one spot to the other to escape the seaweed, but it keeps coming", he added.

The stuff is believed to come from the Sargasso Sea, in the middle of the Atlantic Ocean, according to Paul Lamin, a director at the government's Environmental Protection Agency.

"My department received reports from other countries in West Africa where the seaweed was found in March and April this year, but in Sierra Leone it usually occurs during the rainy season and the quantity fluctuates on yearly basis," he said.

Normally, Lumley Beach in the west end of the city is packed with young people at the weekends.

But nowadays it is desolate.

"We are closing the bar and restaurant for now due to the heavy stench from the seaweed and hope to resume after the rains", he said. "Business has been slow for us."

Not all beach-goers were deterred, however.

Mohamed Bangura, 23, was kicking a football around with friends on a recent, overcast Sunday afternoon.

"We use our bare hands to clean up spaces to play football every weekend," he said, noting that it nonetheless "stinks disgustingly".

Sierra Leone's National Tourist Board has appealed for help in cleaning up the coastline. By Saidu BAH (AFP)

Though July and August -- when seaweed normally tends to appear -- is the low season for tourism, the National Tourist Board has nonetheless launched a clean-up effort.

"It's a difficult task because the seaweed keeps coming on an hourly basis," said general manager, Fatmata Kroma, who appealed for help from the community.

She noted that man-made waste was also washing up on beaches and posing a further challenge to the tourism industry.

"The ocean is not a dustbin," she said.

Galamsey fight: Godfathers have disowned their child but wil...
15 minutes ago