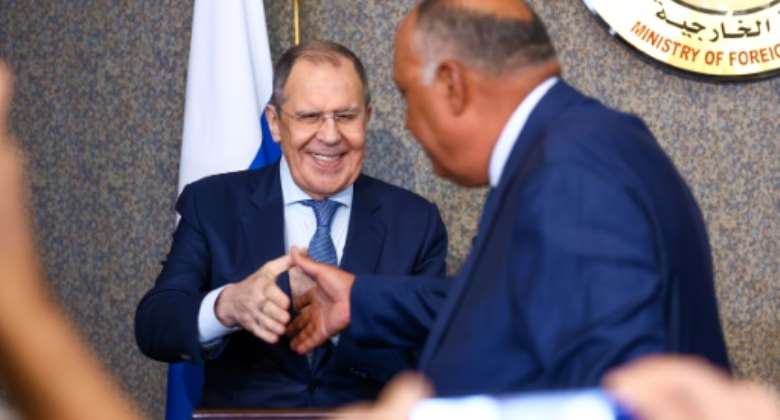 Russian Foreign Minister Sergei Lavrov is greeted by Egyptian counterpart Sameh Shoukry on the first leg of an African tour focused on reassuring customers of Russian grain that their needs will be met. By Handout (RUSSIAN FOREIGN MINISTRY/AFP)

Russia's top diplomat reassured Egyptian leaders Sunday that their orders for Russian grain would be met as he began a tour of African countries dependent on imports for their food supply.

"We confirmed the commitment of Russian exporters of cereal products to meet their orders in full," Foreign Minister Sergei Lavrov told a news conference after talks with Egyptian counterpart Sameh Shoukry.

Lavrov's visit comes hot on the heels of a landmark deal Russia and Ukraine signed on Friday with the United Nations and Turkey aimed at relieving a global food crisis caused by blocked Black Sea grain deliveries.

Between 20 million and 25 million tonnes of grain has been blocked in Ukrainian ports since Russian troops invaded in February, as Ukraine has laid naval mines to prevent an amphibious invasion of its coast.

The deal provides for the creation of safe corridors for grain exports from three Ukrainian ports and also seeks to facilitate Russian grain exports by removing them from the scope of Western sanctions.

"The (UN) secretary general (Antonio Guterres) took responsibility for lifting these illicit restrictions, imposed by the United States and the European Union against (Russian) financial and supply chains," Lavrov said.

Before the Russian invasion of Ukraine, the two countries accounted for 85 percent of Egypt's wheat imports.

After Egypt, Russia's top diplomat is to visit Uganda, Ethiopia and Congo.