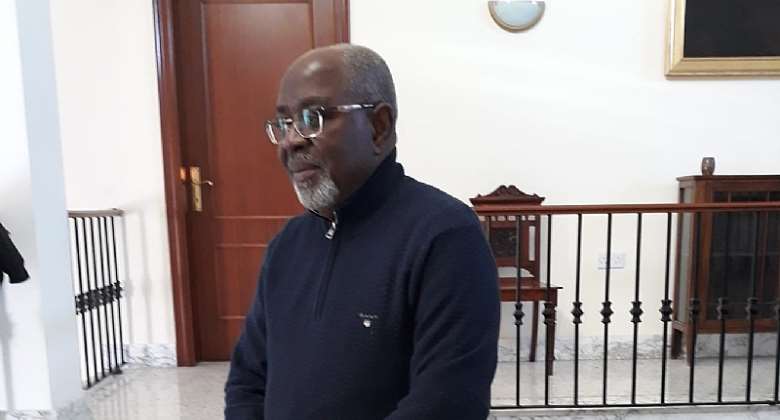 We consider it an honour to be the ones to review the autobiography of no less a personality than Prof. Samuel Tetteh Addo, a classic scholar and a man of immense dignity and honour who has remained a leading light for many in several respects. And so we did not hesitate at all in accepting this task and we are grateful to Prof. and the family for this exciting opportunity.

The Book & Author in Focus

“FOCUS, FORTITUDE AND FORBEARANCE IN A LIFE JOURNEY’; an Autobiography, is an irresistible page-turner that takes readers deep into the life of the author; Prof. Samuel Tetteh Addo, a distinguished Geographer and who has spent close to five decades acquiring and imparting knowledge to the highest level.

Published by GAVOSS Education Plc Ltd 2022, Accra, the 284-page book is divided into 13 chapters with an addendum that captures comments by the author’s spouse, H.E Mercy Bampo Addo on the 80th birthday of the author. There are also a number of appendices which include a lecture by Prof. Addo on “Oklemekuku Azzu Mate Kole II, the Great Krobo King and Outstanding Statesman”, delivered on the occasion of the celebration of the 25th anniversary of the passing of the eminent Krobo Monarch who reigned between 1939 and 1990.

The appendix also contains a publication Prof. Addo co-authored with Alex K. Addo on “The Leadership/Education Nexus in the Development of Manya Krobo in Ghana 1939-1989; The Case of Oklemekuku Azzu Mate Kole II” as well as citations of appreciation and recognition of the author by the University of Ghana for his illustrious service.

The author also documented his family lineage in a detailed family tree. Indeed, this is no average autobiography.

The foreword to the book was written by Alfred Teddy Konu, Former Registrar of the University of Ghana who was Registrar at a time when there were only five public universities and for that matter only five universities in Ghana and so what it meant to be a Principal Officer (Registrar) of no less a university than the premier cannot be overemphasized.

The author, Prof. Samuel Tetteh Kwabla Agidi Addo was born on Tuesday, January 28, 1941 at Takorase Miaweni in present day Upper Manya Krobo District of the Eastern Region of Ghana. The book recounts and emphasizes the making and transformation of little Tetteh through the various phases of his life into the final and enviable Prof. Addo, teasing readers along the unique trajectory that brought him from obscurity in the Takorase Miaweni hamlet to the apex of academia at the University of Ghana and beyond.

The author’s ‘academic personality’ and cultured mannerisms are as unmistakable as infectious. Prof. would always leave you in no doubt as to his being a professor with his bespoke scholarly appearance, demeanour and speech. He literally ‘wears the book on his sleeves’ and this exuded and advertised scholarship greatly among family and other observers alike.

Beyond lecturing mainly at the University Ghana and a stint at the Kwame Nkrumah University of Technology, he obtained enormous exposure from the numerous high profile Visiting Professor roles at North Carolina State University, Raleigh and other institutions in the USA. Prof. Addo had earlier been with a number of Nigerian universities including the Obafemi Awolowo University, Ile-Ife, the United Nations University, Tokyo as a Research Fellow and the Rivers State College of Education, Rumuolumeni, Port Harcourt which later became Ignatius Ajuru University of Education.

The author is a personality who has had sufficient interactions with and made positive impact on many sectors of society including the church, politics, chieftaincy, family, traditional state affairs and principally the academia. 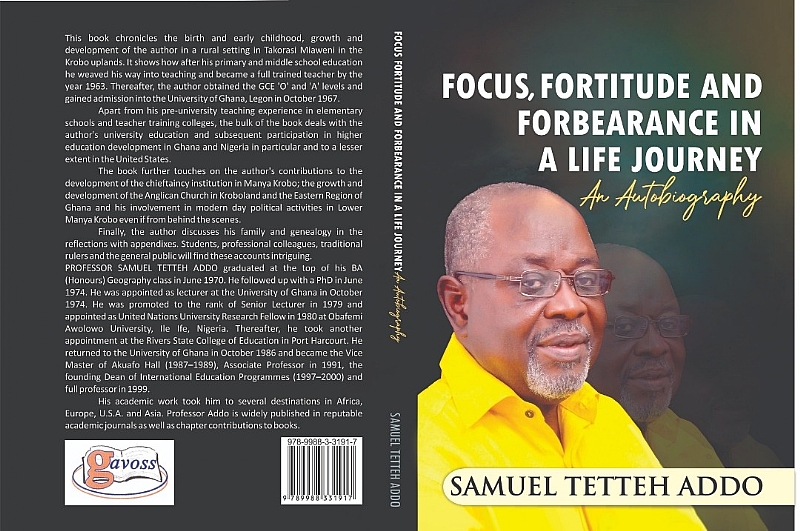 The author, in the preface to the book, emphasizes his “desire to chronicle his lineage which has all along been transmitted via oral narrative” as a key motivation for writing the book. This he believes will serve as a potent reference material for this and subsequent generations of the family.

A second reason as quoted in the foreword is to “record his educational trajectory in the hope that it will serve to motivate and inspire our youth to strive to achieve excellence, however difficult the circumstances may be”.

The story of Prof. Addo as captured in this book is particularly enthralling from the background of the sheer resolve with which he rose from missing out on secondary school (Adisadel College) for the lack of financial support though having passed on more than one occasion to attaining a Ph.D and reaching the limelight. Obtaining a full distinction at the Middle School Leaving Certificate Exams was no fluke either.

He braved the odds going through Nkawkaw Teacher Training College (NTC), Aburi, Government Teacher Training College, Peki and then to the University of Ghana. From the author’s childhood in the village through school to an extensive career as a University Don amidst all the adversities and distractions, he has succeeded in putting himself and family on a high pedestal in what is a direct opposite of what life back at the village in the beginning portended.

We are particularly enthused at the perseverance and hardwork that saw the author come out of his 1970 Bachelor of Arts in Geography with the only Second Class Upper, an accomplishment that gained a mention in a publication in the Daily Graphic.

Winning a conversion from a Master’s Degree to a PhD candidate as one of the only two, (George Botchie and Samuel Addo) upon the recommendation by external examiners was no mean feat. This is more so because as the author put it on page 78 of the book, this feat was achieved in a non-internet and non-photocopier environment; a situation that would have obviously made research more tedious. The same duo of George Botchie and Samuel Addo went ahead to update their proposals, collected additional data and publicly presented their PhD thesis proposals at the beginning of the 1972/73 academic year. This was said to be another first in the University and thus a remarkable achievement for a man who could not get the chance to obtain secondary education.

The author’s appointment as the first Dean of International Education Programmes at the University of Ghana and his promotion to Full Professor around the same time are but a few notable high points in a remarkable career.

The book aptly conveys the author’s deliberate and consistent deference and gratitude to great personalities whose guidance and support have contributed to his accomplishments in this life journey. Notable names here include the late Prof. Alex Adum Kwapong, first Ghanaian Vice Chancellor of the University of Ghana, the late Prof. K. B Dickson of the Department of Geography and Resource Development, who taught and supervised the author’s research works, Prof. Ebenezer Laing, a Professor of Botany who Prof. Addo describes as a friend, brother in Christ, teacher and mentor, the late Prof. P.A.V Ansah, former Master of Akuafo Hall and superior of the author and many others. We consider this attitude of deference and gratitude as one key message this book seeks to express and for that matter a virtue worth emulating.

The author’s acknowledgement of the invaluable contribution of his elder brother, the late Andrews Kofi Addo (who is on record to have introduced Prof. Addo to formal education) to his success is commendable. Known in family and community circles as Teacher Addo Kofi, a pace setter, mentor and benefactor to the author and many of his contemporaries, this remarkable personality no doubt made profound impact on the author and many others including our late father Peter Angmor-Atserdi Adjase-Kodjo. For this reason, our father never missed an opportunity to eulogize Teacher Addo Kofi.

Also noteworthy is the author’s positive approach to life that motivated him to steadily build upon the seemingly wobbly foundation to reach the apex of his ability. We believe this will surely serve to encourage others in similar situations to persevere and achieve their goals despite distractions and adversities.

Our impression and Recommendation

Reading the entire book gave us sufficient insight into the rich life of a distinguished academic and thus what to expect for those who might want to tread similar paths.

We cannot hide our fascination at the author’s mental agility in recollecting the several and varied occurrences in his general life and career particularly the sheer detail and coherence in narration and recall of facts, names, dates etc. Again, his penchant for detail may just have come in handy here. Even details of his flights many years ago have not escaped him. The ability to retain and narrate all the vivid details from many decades ago appears great to us.

Tell us if this detailed recall of facts by the author on page 71 is not intriguing? “I finally opted to do Transport Geography. Prof Dickson was disappointed but he assigned me to a hardworking and meticulous German Lecturer, Dr. Alfred Fiscian. George Botchie and a Nigerian student, Theophilus Okoye signed up for Urban Geography. Thomas Agawu and Kumedjoro decided to pursue Pedology under the tutorship of Dr. G.T Agyepong while T.W Awadzi opted to study soils under the direction of Dr. Peter Ann in the Faculty of Agriculture but with the understanding that his degree would be awarded in Geography. A Rhodesian student, Chichike, was doing an Agricultural Geography course under the supervision of Dr. George Benneh”.

Now, look at this last one of a hilarious ‘non-academic’ recall “It was an evening to remember. (In reference to an evening event organized by the graduate class of 1970/71 during the 1971/72 second term-Easter Term for their Lecturers) The music was good and there were more than enough drinks and savouries for everyone. When the time came for me to address the gathering and explain the thoughts behind the event, I was caught in a game of repetition whereupon Dr. Clement Adjorbu seized the microphone and performed the assignment. Apparently, I had had one more beer than necessary. At about 11pm, Prof. Dickson announced that he was taking over the bar. More senior members had poured in. The party went on until almost 1:00am”.

The content is laced with lessons on the political history of Ghana especially during the heady days of the military rule, most of which had happened during author’s days at the University of Ghana. The book could thus also pass for an authentic source of history.

The references also detail a good number of the author’s research works. The author explains the numerous challenges from multiple directions; family, work, church etc but he never neglected his responsibilities to any of these. His love for his family cannot escape a reader’s attention. It is evident in the numerous interventions and sacrifices he made on the many occasions to ensure that everyone was fine even when he was far away from home and amidst the many hurdles arising out of the political environment at the time.

We have each read the entire book a few times already and for the above reasons and more that needs to be discovered, we wholly recommend to you “Focus, Fortitude and Forbearance in a Life Journey; An Autobiography- Samuel Tetteh Add

Galamsey fight: Godfathers have disowned their child but wil...
33 minutes ago