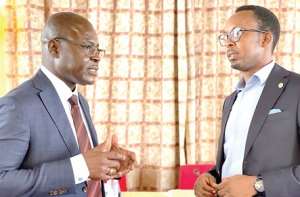 The Ghana Standards Authority (GSA) has said it will ensure the strict enforcement of laws on standards.

This will serve as a guide for other African countries to build robust standards regimes to facilitate smooth trading under the African Continental Free Trade Area (AfCFTA).

According to the Director-General of the GSA, Professor Alex Dodoo, "the rules will be applied without fear or favour to serve the purpose for which they were made”.

Prof. Dodoo said this in an interview with the Daily Graphic on the sidelines of the 66th African Organisation for Standardisation (ARSO) Council meetings in Yaounde, Cameroun, yesterday[June 28, 2022].

He, however, added that the GSA would open a window of assistance to manufacturers, service providers, exporters and importers to comply with the laws and the new quality culture on standards.

He said the GSA was now emboldened because in the last two months, the Cabinet gave approval to the National Quality Policy, while Parliament passed the GSA Bill.

Prof. Dodoo said the rigorous enforcement of the Standards Act, 1973 (NRCD 173) would also bring order to the public space, create jobs, generate revenue for the state and ensure discipline in society.

Parliament passed into law the Ghana Standards Authority Bill, 2022 on June 20, this year to empower the GSA to effectively deliver on its mandate.

The law also seeks to amend and consolidate laws relating to standards, conformity assessment and metrology (the art of measurements), as well as provide for related matters.

It also empowers the GSA to undertake its duties effectively in the areas of conformity assessment and metrology to ensure standards are adhered to in the country.

The GSA has developed more than 4,000 standards on almost every item and food product, including buildings, roads, hospital equipment, electrical cables and appliances, school uniforms, kenkey and ‘sobolo’ in the country.

The ARSO Council meetings form part of the ongoing 28th ARSO General Assembly, which will close on Saturday.

The ARSO was formed in 1977, with the principal mandate to harmonise African standards and conformity assessment and procedures in order to reduce technical barriers to trade and promote intra-African and international trade, as well as enhance the industrialisation of Africa.

Prof. Dodoo is the ARSO President-elect and he will be sworn into office at the meetings tomorrow.

He said beyond the law and policy, the GSA had, for the first time, trained some officers on standards to physically enforce compliance and ensure conformity.

At the council meeting, the Secretary-General of ARSO, Dr Hermogene Nsengimana, called for greater partnership between the international and African standardisation communities to harmonise conformity assessment regimes.

He said the African integration agenda, through AfCFTA, also required the universal membership of African countries in ARSO to establish and maintain common standards.

We love Adwoa Safo but it may be too late for her – Dome Kwa...
18 minutes ago