Ivorians who fled to Liberia return 'home', no longer considered refugees by UN 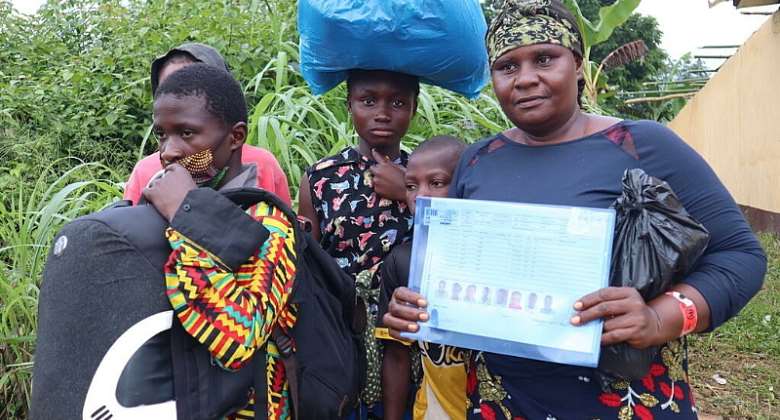 The United Nations refugee agency, UNHCR, has announced the end of the refugee status given to Ivorians who fled political crises in their country to reside in neighboring Liberia. To mark the occasion, the human rights organisation's Chief Filippo Grandi was in the northeastern town of Buuto on World Refugee Day.

The High Commissioner for Refugees Filippo Grandi was in Buuto northeastern Liberia, located about 377 km away from the capital, Monrovia to witness the repatriation of the last batch of 268 Ivorian refugees from Liberia.

"On Monday, June 20, 2022, in Abidjan, on World Refugee Day, together with the President of Côte d'Ivoire, I will announce the cessation clause for Ivorian refugees in Liberia," he said on the eve of his visit.

In October 2021, he recommended that asylum countries end refugee status for Ivorians following the peaceful resolution of two decades of civil conflict and instability in Côte d'Ivoire.

The announcement will end the UN's assistance and protection for Ivoirians who decide to continue to live in the host country.

According to the UNHCR, since 2011, some 310,000 Ivorian refugees – 96 percent of those living in West Africa, mainly in neighbouring Liberia and Ghana – have been able to return home following an improvement in the political situation. This includes some 14,000 who have returned since the start of this year with the help of the agency.

The Ivorian refugees came over in two waves, during two crises. During the first civil war (2003–2007), Côte d'Ivoire was effectively split in two – with the government in charge of the north, and rebels holding the south.

A difficult choice for some

Tony Wempie, 48, teaches French and English in a Liberian school since he arrived in Liberia in 2012. He was among the last batch of refugees to leave.

Three of Tony's brothers were executed during the crisis in Côte d'Ivoire. As such, he had opted to remain in Liberia, but with the cessation clause coming into effect, he has no option.

"I am leaving my students behind. They cried when I told them I was leaving.The freedom I have in Liberia, I will not have that in my own country," he told RFI sadly.

Like Tony, Enmily Dayu, 53, is a single mother with five children who is fearful about a possible flare-up of the crisis in Côte d'Ivoire.

"I did not want to leave Liberia because of what I experienced during the war, but my children's advice is to go back home, so I have no choice," she noted.

Some want to stay

"A small number of them are opting to stay in Liberia and Liberia has agreed that those who opt to stay here will remain here and the agreement has been made," Grandi said, adding that, unless there was a specific reason, they will no longer be considered refugees.

However, some Liberians, especially the host communities, are angry that the UN is not providing assistance to them.

James Bardea is an elder in Buutuo. He expresses his disenchantment with the UN's withdrawal.

"When the refugees came here, we hosted them, we used our resources." If you were eating a cup of rice and you received a refugee, the cup of rice will increase, so almost all of the food will be used up," he told RFI.

"It is our surprise today to see them just leave the community like that. There is nothing for us! We are disappointed."

Hottest Photo Reports
Catch up with all the political quotes from our politicians.
Advertise here
More from Liberia
ModernGhana Links
Liberia suspends senior officials accused of corruption by US
Washington slaps sanctions on Liberian officials over corruption
You Are The Cornerstone Of Nations ~ Gender Minister Tells West African Baptist Women
TOP STORIES

We love Adwoa Safo but it may be too late for her – Dome Kwa...
17 minutes ago