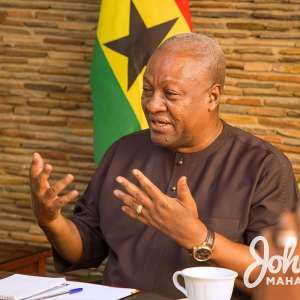 Former President John Dramani Mahama is everything a good leader is. He's comparable to the finest leaders in advanced democracies and the legacies of his four-year mandate (2013 to 2017) bear ample testimony to this.

It took me quite a long time to come to this conclusion. Indeed, as it is with most writer-activists, Wole Soyinka being a classic example, I was, and still am, skeptical about politicians, particularly the stock in our part of the world. Every discerning mind can be pardoned for thinking ill of Africa's political class given the sordid state of the continent yet some of the richest bank accounts off shore are held in their names. However, President Mahama struck me as pleasantly different and my thoughts were affirmed by the positive headlines he made internationally when he chose peace over war, development over personal aggrandizement, posterity over immediate shoddiness in the 2016 elections.

I admire great leaders like Dr. Kwame Nkrumah, Patrice Lumumba, Thomas Sankara, and I have added John Mahama to the list of great leaders in Africa when in 2020 I decided to use my voice as a writer to aid in getting him elected as President of Ghana for the second term. Together with his contemporaries like Paul Kagame of Rwanda and the late John Magufuli of Tanzania, they have proven over the years to be different from the rest of the 21st century African leaders.

Many factors distinguish President Mahama and should make him liked by objective minds. Remarkably, President Mahama is a consummate democrat! In fact, some pundits have said that President Mahama's undoing is his ardent adherence to democratic tenets. He is described by some international diplomats as being too fine for African politics. Yes, he may not have repealed the Criminal Libel Law, yes he may not have passed the Right to Information Act and yes he may not have built a national cathedral but one truth is demonstrably apparent; his sheer goodness at heart encouraged free speech when he served as president. Today, fear engulfs the air in terms of freedom to share our opinions. Over and over again, journalists have confirmed their insecurities and the fact that they undertake a great deal of self censorship than they have need for. In contrast to President Akufo Addo, President Mahama’s experience with Manasseh Azure Awuni, who was a vile critic of Mahama, and in fact some times basely, never exposed him to danger as he has had to endure under the watch of the human rights advocate, President Akufo Addo. Indeed, I have had calls from family, friends and well wishers entreating me to be measured when commenting on happenings under this current administration. I can only call it a pseudo democracy. Never was it, nor will it ever happen under the leadership of President Mahama that a journalist will be hunted like a cheap animal and shot dead in the line of duty. May Ahmed Suale find rest after this barbaric end to his life. On the contrary, President Mahama paid the highest amount for Manasseh’s book at his launch.

How could a man highly touted as being good at heart and a consummate democrat earn the unenviable record as the first sitting president of Ghana to lose an election and by such an embarrassing margin? I will say he wasn’t populist, he was futuristic and he didn’t seek to be power drunk. President Mahama was seized with enormous power to set plans in motion to cling onto power at all cost. While his main contender, Nana Akufo Addo, embarked on a spree of dashing promises without examining their practicality nor impact, President Mahama could have decided to also do same and even begin implementation of such mindless promises. In contrast, however, he chose the path of prudence and frugality. A few examples to refresh our memory. Against all odds he stuck to his decision of replacing the student allowance with a loan. It takes a president with grit to bite such bullets. Current happenings more than vindicate President Mahama's foresight. He knew the ramifications on his re-election bid when his government financed the budget of 2016, an election year, with less Bank of Ghana financing and ending the year with a record setting 6.75 percent deficit. This is compared to the reckless 16 percent deficit recorded in 2020, another election year under President Akufo Addo’s leadership, as per data from the IMF. COVID, obviously, was a cash cow. So President Mahama was more concerned about delivering good governance to the people of Ghana. That, somehow, demanded him to take harsh decisions to the displeasure of the people but then for their own good and risk losing the elections or mess up the economy as we have it now and get re-elected. Mahama settled for the former.

Despite his sad loss, four years down the line we have the benefit of hindsight to score him. Dumsor was a major crisis that was a draw back in his reign. But as all responsible leaders do, he took the situation in his strides and set about solving the problem. It should not be lost on us that although the Hon. Kwabena Donkor, the then Power Minister who was appointed by President Mahama on the back of his expertise to solve the crisis did deliver on this charge, he still opted to resign just because he couldn’t fix it completely within the time frame he set for himself. Whatever the case may be, dumsor was over before Mahama left office. This is unlike the current situation where the Gender Ministry has been without a minister for more than half a year yet President Akufo Addo seems unperturbed about it. President Mahama's infrastructural record leaves many in awe. A few examples once more. While elements of the current administration are claiming fantastic achievements about their digitization and digitalization drive, they have flatly failed to acknowledge the massive infrastructure President Mahama established for this purpose. At the cost of $8.3 million, the Accra Digital Centre was constructed and inaugurated by President Mahama. In addition, an 800km long fiber optic backbone project costing $38 million was also inaugurated by President Mahama in August 2015. It will serve the national interest to learn of similar significant projects in the sector executed by this administration apart from the wastage of $1 million in the shady COVID 19 tracker app. It is significant to emphasis that the single largest capital project in the history of Ghana, the $1.5 billion Tema Port expansion project, was brokered under the sterling leadership of President Mahama. Similarly, the $1 billion investment in Atuabo Gas is telling of the development focus of President Mahama. One can only imagine what would have become of this economy had some of these strategic investments not been done. Once again, it will be refreshing to learn of similar projects to the credit of President Akufo Addo.

A cursory look at the leadership philosophy of President Mahama and you can’t help but salute his acute skill at assembling the best hands for the job. To achieve this, he was able to man up to party opposition to appoint non core party members into sensitive positions. So President Mahama surrounded himself with experts, no wonder his administration saw such impressive governance. He put Prof. Naana Jane Opoku-Agyemang at the Education Ministry, Nana Oye Bampoe Addo manned the Ministry of Gender and Social Protection, while Marrietta Brew Appiah-Oppong ably run affairs as Attorney General and Minister of Justice. Until their appointments, these illustrious women were least associated as core party members. In fact, one appointment that stands President Mahama out was Seth Terkper as Finance Minister. This saw many party members complain that the cash was not flowing into their pockets as is the usual expectation. Mr. Terkper is the kind of technocrat who understands the principles of conflict of interest and so he won’t appoint his company as a transaction advisor for loans that he as Finance Minister proposes to contract for the Government of Ghana. Through the wisdom of President Mahama, the Flagstaff House benefited from the temporary services of celebrated experts like Ben Dotse Marlor, Prof. Raymond Atuguba and Emmanuel Bombande. President Mahama gave meaning to the view that the seat of government mustn’t be a loitering ground for party apparatchiks. He remained faithful to this principle when he left the country in shock for weeks with his choice of Prof. Naana Jane Opoku-Agyemang as his running mate in the 2020 election. This is another indication yet of his intention to restore dignity to the presidency with world-class appointments.

Down to the fundamental issue of survival, businesses boomed during his reign and hard working people got their daily bread with ease. He created a conducive environment for businesses to thrive and many of them did thrive. An example, is Dr. Papa Kwesi Ndom, whose bank had branches scattered across the country. Even the countryside felt the presence of Ndom's GN Bank which gave opportunity to many young people to be employed. It's sad to know that many of these banks are not in existence today because the man is out of business. As a writer who is also into the publishing business, times were good during the Mahama era because writers and publishers were in business with senior high schools. It was an open market where we got the head teachers of senior high schools to adopt our literary books as supplementary readers for their students. Though we were doing business, we were also conscious of the fact that reading, which is the foundation of all learning, was being promoted in order to broaden the knowledge and horizons of these students. Every writer or publisher had that privilege or opportunity to sell their books to any senior high school in the country then, but since 2017, when a new administration took over, we lost that opportunity. Just a few writers or publishers who are affiliated to the current government have such opportunities now. A lot of us are out of business. Friends of mine in other sectors who seldom complained about hardship are all now broke and can barely feed their families. Many of them made it in business during the John Mahama era without any affiliation to the then government.

Such a good man suffered at the hands of wicked propaganda. It was as though everybody was programmed to sing from one hymn book. The false propaganda against his government was beyond description. Literally everyone bought into the lies and exaggerations. Many opinion leaders we followed and thought were sincere have now proven that they just merely hated the man for no valid reasons. Perhaps, they did not belong to his party or did not like his tribe or were just envious of a gifted leader. Their hypocrisy can no longer hide. We can all now see very clearly all the good works President John Dramani Mahama did for Ghana.

As a writer who stands for truth and progress, I think that it will do Ghana a lot of good to call on Ghanaians to massively support John Mahama and the NDC to regain power in 2024 in order for him to complete his many abandoned projects and do even more. He has a track record for which reason we can trust him for the second time.