People will think this is not real. It's a true story in many Ghanaian and African rural communities 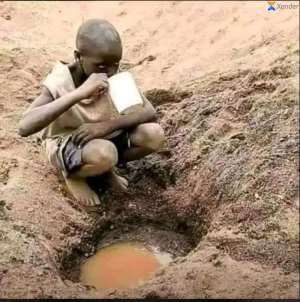 A typical village man like myself will appreciate this picture a thousand times unlike those who sit in the Ministries thinking the whole Ghana is like Accra, Kumasi or any other towns thay stage campaigns during elections.

As an Assembly Member, I saw similar or worst stories in Yombokuraa, Donkokuraaa, Maanukuraa, Jankpulokuraa, Darikuraa and a host of other human settler communities in Ghana where the source of drinking water is worst than the picture here.

Meanwhile, our Government and the world have been on attaining the United Nations SDGs by 2030, some 8 years latter. It is not fun that article 240 of the 1992 constitution of Ghana promulgated Local Governance for the people, supported by the Local Governance act (act 936). The indented purposes of these legal establishments have been brainwashed by Central Governments since 1992 with the worst experience from the current Government.

With all good and purposes, the constitution, if well followed, Assembly Members who are the noses and breaths of the electorates, should be supported through the District Assemblies common fund to enable them carry out development projects in their various communities to be accounted through the Auditor General and verified by Parliament.

This makes me support the amendment of the constitution or Parliament should enact an act to give Assembly Members at least 10% of their District Assembly's common fund. Payment of Assembly Members is key, but development of their various communities is far needed than paying them directly.

It will be a Major move towards attaining the SDGs, it will promote inclusiveness in Governance, it will give each person their share of the national cake.

The current structure and how it is practised have made Assembly Members act like receivers of mercies of Government and sometimes some projects are kind of imposed on their people.

The say of the Assembly Member must always meet the demands of Government. For instance, a particular Political Party in Government can decide to give a particular community a borehole as means of appreciation for supporting the Party in elections which may not be the perculiar need of the people, the Assembly Member, if not put in the known, this project can be executed there at the expense of others that need it badly.

Sometimes even if they are put in the known, they risk changing the community because it may possibly be announced before they the Assembly Member gets to know.

We need some structural and mental changes at the Assembly levels to get these running and Parliament of Ghana needs to take seriousness in making better the work of the Local Government to reduce basic development issues.

Just crying out for the many who are dying in silence.

Latest Photo Reports
Catch up with all the political quotes from our politicians.
Advertise here
More from Article
ModernGhana Links
COVID hurt West and Central Africa's small-scale fishers. They need more support
How marine fisheries can add millions of tonnes to Africa's catch
Following a fungus from genes to tree disease: a journey in science
TOP STORIES

Ghana’s problem is pomposity, deception, lack of sincerity b...
26 minutes ago

Financial transactions will be allowed even without Ghana ca...
44 minutes ago