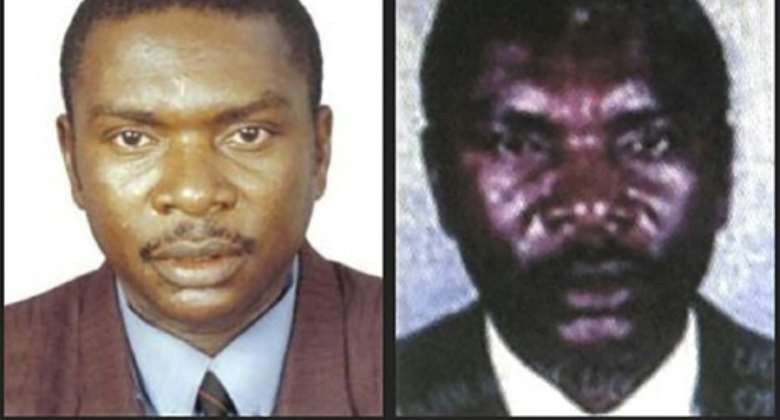 Charged with war crimes, genocide and crimes against humanity, Mpiranya became the top priority for investigators in May 2020. By - (MICT/AFP/File)

Protais Mpiranya, whose 2006 death was revealed by UN prosecutors on Thursday, was on the run for years, with investigators eager to bring him to justice for his alleged role in the 1994 Rwandan genocide.

Charged with war crimes, genocide and crimes against humanity, Mpiranya became the top priority for investigators in May 2020, following the arrest of alleged genocide financier Felicien Kabuga near Paris.

But unbeknownst to them, Mpiranya, who was living in Zimbabwe's capital Harare under an alias, contracted tuberculosis in 2006 and died on October 5 that year.

His family went to great lengths to hide his whereabouts, concealing the fact of his death and even preparing a tombstone that misidentified him, to ensure that few would know his true fate.

"They repeatedly provided false statements to investigators, and urged those who knew of his presence and death in Harare to make false statements in the event of a hearing," said the Mechanism of International Criminal Tribunals, which oversees prosecution of those responsible for the genocide.

Mpiranya, who was believed to be around 46 at the time of his death, was accused of commanding a presidential guard implicated in high-profile murders during the 1994 slaughter which left some 800,000 dead.

The presidential guard was a feared outfit accused of targeted assassinations during the 100-day massacre of Tutsis and moderate Hutus.

In particular, Mpiranya was allegedly among those who ordered the murder of then prime minister Agathe Uwilingiyimana, 10 Belgian soldiers protecting her, and several other leading politicians and their families on April 7, 1994, in the early hours of the genocide.

The evening before, a plane carrying Rwanda's president Juvenal Habyarimana had been shot down on its approach to Kigali International Airport.

The president had just returned from a regional meeting in Tanzania, where he agreed to push ahead with the terms of the 1993 Arusha Accords which were meant to end a three-year war between the Hutu government in Kigali, and a Tutsi rebellion.

The latter made the case that Uwilingiyimana, a moderate Hutu and Rwanda's first female prime minister, had legal authority to take control of the country and suggested she make a national address to that effect.

But Rwanda's radical Hutu leadership had other ideas.

On the morning of April 7, Mpiranya and two other military officials "ordered their subordinates... to search for the prime minister, Agathe Uwilingiyimana, in order to kill her", according to the prosecutor's indictment for the former International Criminal Tribunal for Rwanda (ICTR).

Uwilingiyimana was sexually assaulted and murdered and left in the street, naked, in full view of passersby. The savage attack was overseen by a captain of the battalion of the presidential guard, the indictment said.

But her murder was only the first in a wave of assassinations targeting prominent figures and politicians who supported the Arusha Accords.

The killings aimed "to create a political vacuum and derail the implementation of the Arusha Accords", read the indictment, which directly implicated the presidential guard in the attacks.

'Fear of being discovered'

Mpiranya hailed from the former province of Gisenyi, in northern Rwanda, also the homeland of Habyarimana and several other top-ranking hardline Hutu military officials.

After graduating from military college in Kigali in 1983, he was assigned to the national police force.

In 1991, as the army was fighting the rebels of the Rwandan Patriotic Front (RPF), led by today's President Paul Kagame, Mpiranya was transferred to the presidential guard battalion and two years later was promoted to commander.

In July 1994, after the army's defeat at the hands of the rebels brought about the end of the genocide, Mpiranya began a long journey into exile that would take him to several African countries.

In 1998, he fought alongside Congolese forces in a campaign against rebels backed by Rwandan troops, has said the non-profit African Rights, which has studied the genocide.

He also travelled to Zimbabwe on behalf of the Democratic Forces for the Liberation of Rwanda (FDLR), a militia partly composed of former Hutus implicated in the genocide, and accused of exploiting the mineral wealth of eastern Democratic Republic of Congo.

In September 2002, the ICTR issued an arrest warrant against Mpiranya, prompting him to seek refuge in Zimbabwe, where he spent the next four years, living under a false name in an affluent neighbourhood in Harare.

Despite access to a fake Ugandan passport, his status as an international fugitive severely limited his opportunities for travel, with his wife and daughters living in the UK.

"His last years were marked by anguish and fear of being discovered and of being tried for his crimes, like many other former Rwandan officials indicted for their roles in the 1994 genocide," the UN prosecutors said.