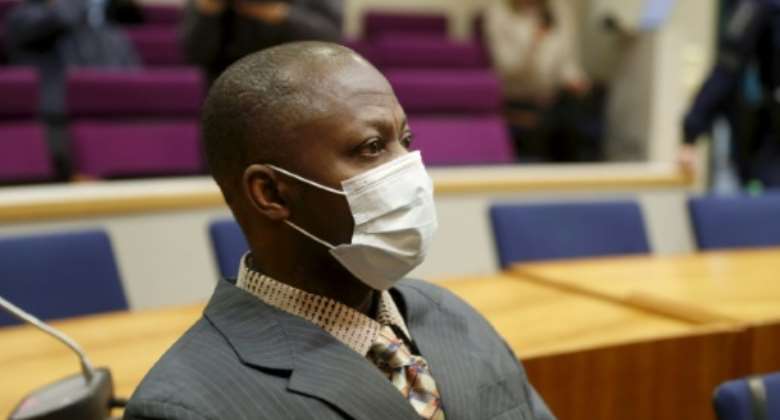 Gibril Massaquoi, in court in February, was acquitted on all charges. By Kalle Parkkinen (Lehtikuva/AFP/File)

A Finnish court on Friday acquitted a suspected warlord accused of atrocities in Liberia's civil war, including rapes, ritual murders and the recruitment of child soldiers.

In its ruling, the Pirkanmaa district court found the prosecution had "not proven with sufficient certainty" that Gibril Massaquoi, 52, had been involved in the alleged crimes in the later years of Liberia's second war, which ended in 2003.

At the time, Massaquoi was a senior commander of the Revolutionary United Front (RUF), a Sierra Leonean rebel group that also fought in Liberia.

Massaquoi moved to Finland in 2008 and was arrested there in March 2020 after a rights group investigated his war record.

He had denied all charges and claimed he was not in Liberia when the alleged offences took place.

The trial has been closely watched by campaigners who have fought for decades for those who carried out atrocities in Liberia to face justice.

A probe by rights group Civitas Maxima's into Massaquoi prompted Finnish police to launch an investigation.

At the outset of the trial in February 2021 the group said the "ground-breaking" verdict could set "a monumental precedent".

Prosecutor Tom Laitinen told AFP his team had not yet decided whether to appeal the 850-page ruling yet.

Back-to-back civil wars between 1989 and 2003 in the West African nation of five million left 250,000 people dead and millions displaced.

Massaquoi, pictured in Sierra Leone in 2001, denied all charges and claimed he was not in Liberia when the alleged crimes took place. By GEORGES GOBET (AFP/File)

The conflicts were marked by merciless violence and rape, often carried out by drugged-up child soldiers.

So far only a handful of people have been convicted for their part in the conflict, and efforts to establish a war crimes court in the country have stalled.

Former Liberian warlord-turned-president Charles Taylor was imprisoned in 2012 -- but for war crimes committed in neighbouring Sierra Leone, not in his own country.

Massaquoi risked a life sentence, which in Finland means on average 14 years behind bars.

In an unprecedented move, the Finnish court decamped to Monrovia between February and April last year, and again in September, to hear testimony from dozens of witnesses and visit sites where the atrocities allegedly unfolded under Massaquoi's orders.

Massaquoi himself remained in custody in Finland, and followed the proceedings from his cell.

The visits became the first time that testimony in a Liberia war crimes trial was heard in the country.

The Finnish trial thus avoided the problems of bringing witnesses to Europe that have hampered similar Liberian war prosecutions in Switzerland and France.

In villages in northern Liberia, witnesses claimed Massaquoi went under the moniker 'Angel Gabriel' and ordered civilians, including children, to be locked into two buildings which were then torched.

At least seven women were raped and murdered in one village and other locals were killed, their bodies cut up and "made into food which Massaquoi also ate", Laitinen told the court.

A 4,000-page evidence dossier seen by AFP further detailed mass murders and rapes in Lofa county and the capital Monrovia, and the enslavement of child soldiers.

But Massaquoi's defence highlighted numerous inconsistencies and contradictions over the timings and locations of witness accounts of atrocities, which happened a generation ago.

His lawyers insisted he was in neighbouring Sierra Leone under watch in a UN safehouse at the time of the atrocities.

Massaquoi agreed to give evidence to the UN Special Court for Sierra Leone, set up to investigate war crimes in that country.

He was later granted asylum in Finland and immunity from prosecution over crimes in Sierra Leone, but not Liberia.

Finland's law allows the prosecution of serious crimes committed abroad by a citizen or resident.