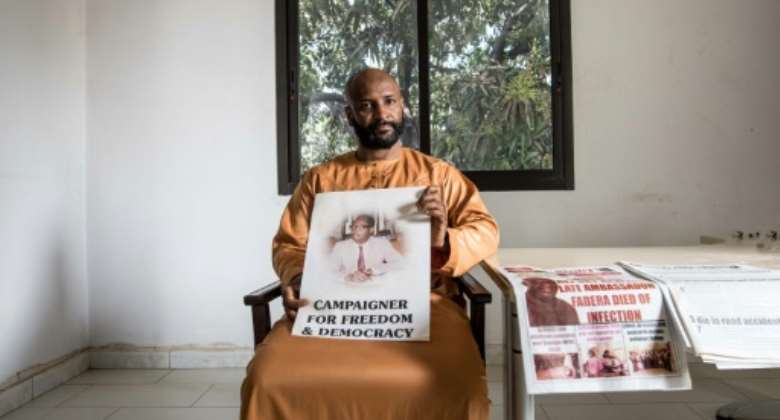 Baba Hydara holds a poster of his late father Deyda Hydara who was gunned down in 2004. By MUHAMADOU BITTAYE (AFP)

The trial began in Germany on Monday of a Gambian man accused of being part of a death squad that assassinated opponents of former dictator Yahya Jammeh, including an AFP journalist.

The suspect, identified by media as Bai Lowe, is accused of crimes against humanity, murder and attempted murder, including the 2004 killing of AFP correspondent Deyda Hydara.

Lowe was arrested in Hanover in March 2021 and will appear in court in the nearby town of Celle.

The trial is "the first to prosecute human rights violations committed in Gambia during the Jammeh era on the basis of universal jurisdiction", according to Human Rights Watch.

Universal jurisdiction allows a foreign country to prosecute crimes against humanity, war crimes and genocide, regardless of where they were committed.

Outside the courtroom on Monday, activists held a placard demanding that Jammeh "and his accomplices be brought to justice".

Lowe is accused of being involved in two murders and one attempted murder while working as a driver for the hit squad known as the Junglers between December 2003 and December 2006.

"This unit was used by the then-president of Gambia to carry out illegal killing orders, among other things" with the aim of "intimidating the Gambian population and suppressing the opposition," according to federal prosecutors.

Yahya Jammeh ruled Gambia with an iron fist for 22 years but fled the country in January 2017 after losing a presidential election. By ISSOUF SANOGO (AFP)

Hydara, 58, was gunned down in his car on the outskirts of the Gambian capital Banjul on December 16, 2004.

Lowe is accused of helping to stop Hydara's car and driving one of the killers in his own vehicle.

Hydara was an editor and co-founder of the independent daily The Point and a correspondent for AFP for over 30 years.

The father-of-four also worked as a Gambia correspondent for the NGO Reporters Without Borders (RSF) and was considered a doyen among journalists in the tiny West African state.

In his newspaper The Point, he had a widely read column, "Good morning, Mr President", in which he expressed his views on Gambian politics.

According to investigations by RSF, Hydara was being spied on by Gambian intelligence services just before his death.

Hydara was a tenacious and "really stubborn" journalist, according to his son Baba Hydara, 45.

"This is a day we have been waiting for for 18 years," Baba Hydara told AFP outside the court.

"It's an important day for justice but it is just the beginning of a long journey," he said, expressing a hope that Jammeh will also "be judged".

Prosecutors also accuse Lowe of driving members of the Junglers to a location in Banjul in 2003 to assassinate lawyer Ousman Sillah, who survived the attack with serious injuries.

His daughter Amie Sillah told a press conference ahead of the trial that she hoped it would shed light on "why, who and how they tried to kill my father".

In a third incident in 2006, Lowe is accused of driving members of the unit to a site near Banjul airport where they shot and killed Dawda Nyassi, a suspected opponent of the president.

Jammeh ruled Gambia with an iron fist for 22 years but fled the country in January 2017 after losing a presidential election to relative unknown Adama Barrow.

He refused to acknowledge the results but was forced out by a popular uprising and fled to Equatorial Guinea.

Lowe is the third alleged accomplice of Jammeh to be detained abroad.

The other suspects are Gambia's former interior minister, Ousman Sonko, under investigation in Switzerland since 2017, and another former Jungler, Michael Sang Correa, indicted in June 2020 in the United States.

Patrick Kroker, a lawyer for Baba Hydara, told AFP outside the court that the opening of the trial was "an important day for justice".

"We hope it will be a signal to... Switzerland and the United States, but also Gambia", he said.

"It is commendable that the German justice system is leading the way and a signal for the leaders in Gambia."

Germany has been particularly active in pursuing cases under universal jurisdiction, most notably in connection to the Syrian regime.

Teacher unions to decide on strike over 20% Cost of Living A...
32 minutes ago