John Mahama’s Prophetic Words Are Hunting Down His Northern Traitors 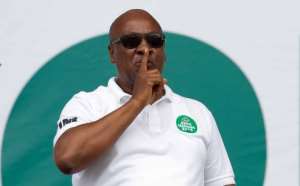 In his last address to the nation, John Dramani Mahama intimated that, posterity was going to be his best judge. Although this was said with an open heart, but it has become the prophetic saying that is crumbling all the towers of his traitors, especially his Northern brethren, who held him out for the crony capitalists to steal his mandate and to become the vampires of the state of Ghana today.

I am not being ethnocentric neither am I engaging in tribal politics, but just trying to address the issue of betrayal by the Northern brethren who played a key role in sucking the blood of Mahama and destroyed a legacy he was building.

Indeed, Ghana is 65 years, and out of these years, we have had 4 Republics with an accumulated years of about 46 years of democratic rule. Out of this 46, Dr Hila Liman of blessed memory, the first Northerner, had about 22 months in office even before the inception of this 4th Republic. The 4th Republic owed 26 years to Southern Presidents with Northerners being fortunate by a constitutional requirement to play the second man in the game. Until 2012, when Northerners truly had their own brother to man the affairs of this country for the four-year period provided by the 1992 constitution, we had always gladly played the second role.

Northerners by nature are hospitable and therefore, they can do anything to please a stranger at the expense of their own blood. This notwithstanding, for a Northern brother to accept to lead the charge against Mahama at the time he took the baton to make a case for generation of Northerners in politics, was seen as an act of total betrayal and outright mark of low self-esteem.

Our geographical location is naturally disadvantageous. With an unfavourable weather condition, our vast arable land is wasting away without the opportunity of having all year-round farming. With the few months available for farming, we prepare to harvest, and when there is a bumper harvest, due to poor road network and lack of ready market, the farmer is either short-changed by the Southern middlemen and women or he consumes what he can and leaves the rest to the mercy of the weather.

It is also true that the Northerner has had almost everything second in Ghana. We had education second to indigenes from the middle belt and third to indigenes of the coastal belt. We had national grid electricity for the first time in the 1980s without any deliberate industrialization policy to create jobs for our numerous active youth population. Even today, some Northerners are enslaved in their own country. They flee the vagaries of the weather and harsh local northern economy and run into the hands of some unscrupulous patrons in Southern Ghana who treat them like second class citizens.

Then came the grandson of Jakpa who paid his dues as a Member of Parliament (MP), Deputy Minister of State, Minister of State, Cabinet Minister, Vice President, and President of the Republic of Ghana. He did not engage in lopsided development geared for the benefit of only his fellow Northerners, but rather made the case and demonstrated that the Northerner, when given the chance could also become a first-class citizen and was capable of managing the affairs of Ghana just like all others before him. So, the coming of John Dramani Mahama was to break the mould and bondage that Northerners had hitherto been held all these years.

As President, John Mahama with all his imperfections just like his predecessors, tried all his best to be an honest leader and one who placed Ghana first before himself. His vision was clear, and his national development agenda was evenly distributed. Ironically, most of the issues that played against him were inherited as transferred responsibilities. Talk of the energy crisis (dumsor), corruption related cases like the “Woyomegate” and a host of others, were all inherited legacies. Nonetheless, a true leader takes full responsibility when placed in charge, that was why John Mahama took personal responsibility for solving the energy crisis (dumsor) that he inherited and promised to fix it and indeed fixed it without blaming his predecessors.

Just when we all thought H.E John Mahama was going to clear the path and blaze the trail for future generations of northern indigenes, some Northerners decided to take a contract to destroy this dream and legacy. Leading the charge was none other than Dr Mahmoud Bawumia and his wife, Samira Bawumia, who seized every opportunity to engage in attacking the person and integrity of John Mahama whilst failing to constructively criticize his government. Let it be known that nobody is saying that all Northerners must support the NDC or even blindly support John Mahama, but the personal attacks that were incessantly rained on him by some in the Northern cabal, could have at best be moderated and balanced.

To set the agenda of the Northerner pulling his own fellow Northerner down well executed, they built an elaborate architecture with Dr Bawumia at the helm of affairs coordinating with the likes of Manasseh Azure Awuni fuelling and shaping the propaganda with a so-called nationalist agenda. This was an attempt to get people to actually believe their cooked-up story that Mahama was indeed not even supposed to lead the country to begin with, and even enlisted Mahama’s own cousin, Hon Otiko Djaba and Samuel Abu Jinapor, as representatives of Mahama’s own people from his homeland (Gonjaland), who perhaps knew him far better than all, for everyone to believe that all that they said about him (John Mahama) was the gospel truth.

To help expand the base of the Northern cabal were people like Mustapha Hameed who could fake tears on live TV just to kill a brother. Then came Bugri Naabu with support from other Northerners. They started the chorus and added numbers to their base of members of the anti-Mahama Northern cabal. In the morning, if Bawumia wasn’t describing John Mahama as incompetent, his wife Samira will call him a useless President. In the afternoon Abu Jinapor would call Mahama a thief and a corrupt leader, Madam Otiko Djaba would refer to him as a wicked demon with a hard heart. In the evening if Manasseh was not cooking-up bribery stories to amplify his regime change agenda then, Bugri Naabu was corroborating fake bribery allegations with Mustapha Hameed shedding his tears to craftily beautify their theatrical drama stage play. Mahama was eventually pulled down by his own fellow Northerners!

The NPP eventually won in 2016, Nana Akufo-Addo became President, Dr. Bawumia’s bragging was somehow vindicated, and all these Northern traitors were settled with juicy appointments and contracts as a reward for treachery and perhaps good work done. Now, that the hour for them to show up for work came then Karma turned up as the examiner. Mahama’s last words as president started to haunt and hunt them down. The first casualty was NPP Northern Regional Chairman Bugri Naabu when he was finally voted out in 2018 after all his antics failed. He has since left politics and in perpetual coma.

Manasseh was hit directly at his chest with a bullet from his trusted friend (Nana Akufo-Addo), whom he thought was the Angel in waiting. As of now, Manasseh still moves in Ghana like an apprehensive chameleon which doesn’t want to break the ground. He looks above his shoulders every other minute to be sure he was not being followed or trailed to be killed like the fate that befell Ahmed Suale. Madam Otiko Djaba was jostled out of politics even before Nana Addo’s first presidential term ended. Today, she’s just as ordinary as any NPP foot soldier in my own Laribanga city without her NPP cap on.

The final stone landed on Dr Bawumia’s head, and that was a heavy one. In the beginning, he tried to dodge responsibility when he realized that the centre couldn’t hold for him. In the middle he tried to equalize and play yet another game while in power, but before he could reorient himself towards that, the suffering masses started to remind him about his numerous juicy promises and the beautiful rhetorical jocular grammar he often blurted out during his numerous public lectures and pollical platform speeches. The last straw that broke Dr Bawumia’s back was when the economy started to stumble and crumble like a pack of cards with him at the helm as the leader of the Economic Management Team. Just when he thought that his dream of becoming the next President was getting solidified, Mahama’s prophetic words triggered Karma to bite Dr Bawumia. His own words captured on numerous recorded audio and video clips when played back at him don’t even need to have any words inserted or edited because his own words have crucified him and perhaps curtailed his presidential ambitions.

All the juicy NPP election campaign promises have either not been fulfilled or when partially implemented did not yield desired results. Talk about 1V-1D, $1m per constituency every year, 1 Ghanaian 1 bank account, single digit inflation, a stable Cedi, all these election promises have come to naught. Bawumia’s attempt to navigate and transform himself into an overnight lover of IT got overwhelmed by his own words when played back at him and the economic crisis Ghana has found itself in. He has been caught in the web so much so that there is no loop to escape responsibility for the economic mess. Perhaps, he needs to remember when John Mahama reminded him of what it takes to be President.

Dr Bawunia is missing, and when found, he complained of a toothache that makes it difficult for him to deliver any public lecture on the depreciation of the cedi or on the economic quagmire Ghana has found itself. The last time we heard of him, we were told he was kidnapped by the dollar but when he gets any temporary relief, he goes loitering around internet cafes instead of the forex bureaus.