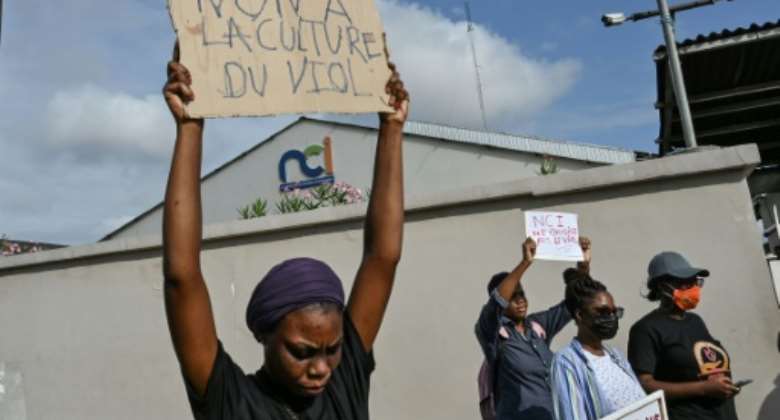 Women protested outside the offices of NCI television after a controversial progamme on rape last year. By Sia KAMBOU (AFP/File)

In a hall at Abidjan university, around 20 people are getting dance therapy, part of an innovative event designed to educate people about sexual politics.

"The start of consent is the power to say 'no'," says Franco-Congolese dancer Bolewa Sabourin as the workshop draws to a close.

"You see that feeling of pleasure, of pride that you get when you're dancing in front of people you don't even know? That's what we're looking for."

Sexual violence is when the attackers take control of women's bodies to dominate their spirit, he says. "They've been beaten, raped."

Dancing is exactly the reverse, he argues. "There, we are passing through the body to liberate the spirit."

Sabourin's workshop was part of the first "Festival of Consent", organised to try to fight back against gender-based violence.

The event tackled a number of related issues, including men's relationship with feminism, and the links between feminism and religion.

In last September's programme, a former rapist was encouraged to use a dummy to demonstrate how he abused his victims. By Sia KAMBOU (AFP/File)

"Our aim with this festival is to make people understand that consent concerns everyone, men and women," Benedicte Joan told AFP.

There is clearly work to be done.

Last September, television presenter Yves De M'Bella was suspended after he hosted a programme in which he laughingly encouraged a man presented as a former rapist to use a dummy to demonstrate how he abused his victims.

The programme sparked a massive outcry, a protest outside the television station NCI's studios and a petition signed by 46,500 people.

A report issued earlier this month by the Paris-based International Federation for Human Rights (FIDH) said victims of sexual violence in Ivory Coast faced a string of obstacles in the path to justice.

Although the latest official figures -- for the year 2020 -- recorded 822 cases of rape, 152 sexual assaults, 96 cases of forced marriage and 13 cases of female genital mutilation, these numbers probably underestimated the extent of the problem, it said.

"Few survivors manage to denounce the sexual violence suffered," said the report. And even when they did, it added: "Medical, psychological and social care, as well as access to justice, are not ensured."

'We have to wake up'

The festival at Abidjan's Felix Houphouet-Boigny University was the culmination of months of contact between students and activists with the associations behind the event.

Over the weekend, hundreds of students debated the issues with the campaigners.

"When you travel around the country, you realise that there is still a lot of work to be done," said civil engineering student Diomande Ben Mohamed.

"There are things that still happen to our sisters," he added. "When you see that, it pushes you to join the associations.

"We have to wake up now. It's a fight for the whole family, it's not just about women," he insisted.

"Young people need to be aware of this."

"Our generation is aware of the importance of these questions, of not being violent towards women," she said.

"When you wear tee-shirts of our associations with messages on them, you are often stopped and asked about them," she added.

At another festival event, Bintou Mariam of Equipop, an international group campaigning for the rights and health of women and girls, debated the issues with a group of students.

They discussed what room there was for old-fashioned gallantry; and how far feminism could be reconciled with the country's traditions and culture -- how, for example, a woman could resist her husband's desire for a polygamous household.

"Tradition is often held up as a pretext," said Bintou Mariam. "There is a lot of hypocrisy about women's rights."

But she added: "A woman exists as a woman, not as an extension of her husband."

Television presenter De M'Bella got a fine and a 12-month suspended sentence for condoning rape and for indecency.

He no longer works for NCI but has a show on a popular radio station, Nostalgie.

Going to the IMF with Ken Ofori-Atta leading will yield no r...
50 minutes ago