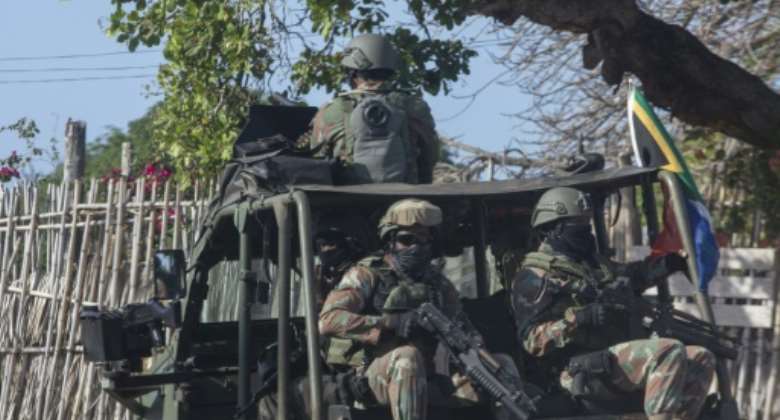 Global energy giants were quick to halt their Mozambican gas projects when jihadist violence erupted on their doorsteps. After months of calm, reviving those multi-billion-dollar projects is a much slower job.

TotalEnergies CEO Patrick Pouyanne visited Maputo on Monday, saying he was optimistic about the $20-billion project.

"A lot of progress has been done, let me be clear," Pouyanne said, but added more work was needed to ensure lasting peace.

"Security is not only a matter of armed forces," he said. "It's also a question to work together with the population."

Vast natural gas deposits were discovered in the northern province of Cabo Delgado in 2010, the largest ever found south of the Sahara. Once tapped, Mozambique could become one of the world's 10 biggest exporters.

But in late 2017, armed insurgents began launching raids in the region, located near the Tanzanian border. Jihadists committed a series of beheadings and torched entire villages, claiming allegiance to the Islamic State.

Last March, insurgents made a surprise attack on the coastal town of Palma, the gas-hub near the TotalEnergies project, which the company promptly suspended.

"TotalEnergies should return this year, if it's going to meet its 2026 production goal," said Borges Nhamirre, a Maputo-based researcher for the Institute of Security Studies.

Of the three projects, only ENI's is on track. The Italian company's LNG facility is entirely offshore. ENI told AFP that it's set to begin production in the second half of 2022.

Coral Sul, the first floating LNG facility deployed in deep waters off Africa, arrived in Mozambique in early January. Once operational, it can produce 3.4 million tonnes of LNG a year.

With its 6.2-billion-euro investment, ENI said simply: "We continue to monitor security developments in the Cabo Delgado region and work closely with the government on this matter."

Experts say the offshore facility poses fewer security risks. Nhamirre pointed out that "in four years of violence, there hasn't been a single attack at sea, except for a few raids on fishermen near the coast."

The ExxonMobil project is at a standstill. Once expected to produce 15.2 million tonnes of LNG a year, the company doesn't seem ready to move ahead until the security improves.

"Maputo is determined to have this project," said Alexandre Raymakers, from the risk consultancy Verisk Maplecroft. "They need the revenue. We're talling about 35-60 billion dollars".

Mozambique's entire GDP is only $13 billion.

The mission is officially open-ended, but Raymakers said "it's unlikely to last longer than 12 months due to SADC's limited ability to fund the mission."

Map of Mozambique locating the province of Cabo Delgado and the city of Palma. By Kun TIAN (AFP)

"It's not about the number of troops they have on the ground," he said. "They have limited air cover, few helicopters."

And the insurgents have already adapated to the foreign forces, retreating to neighbouring Niassa province, which is now the rear base for their guerrilla attacks.

In January, the non-profit Acled documented about 30 attacks.

But observers say the problem is more than military.

Cabo Delgado is about 2,000 kilometres (1,200 miles) north of Maputo, and is one of the poorest parts of a very poor country.

The lack of investment in infrastructure or opportunities for the youth make it easy for insurgents to find new followers.

Franklin Cudjoe back calls for probe into Covid-19 expenditu...
59 minutes ago