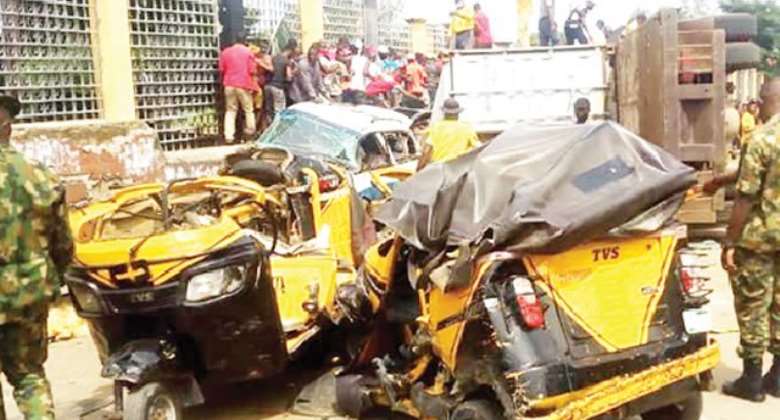 The Ghanaian television screen in the last decade has seen a proliferation of many foreign soap operas which has gradually and subtly gained a national audience and popularity. These soap operas without a shred of doubt are widely patronized by a large majority of Ghanaians because of their translated forms to the Akan language, Twi specifically. It can again be emphasized be without hesitation that “Kumkum Bhagya” was the most Sought after opera in the last decade with star Characters Abi the “Rockstar” and Pragya the “ Indian screen goddess.”

Pragya, one of the main characters in Kumkum Bahgya is usually seen in a tricycle as a means of transport which is synonymous with the Indian people. Ghanaians then adopted to refer to this same vehicle which had found its way into Ghana as “Pragya” because of the continuous use of the vehicle by the actress in the movie which had virtually become a national Programme.

This tricycle widely used across the globe which Ghana is of no exception has several names. In Nigeria, the tricycle is referred to as keke”, in Ghana it is known in some circles as “Yellow Yellow” “Mahama Camboo” “Adeedeta”, and the most widely- celebrated name used for this tricycle is “Pragya”.

Pragya as means of transport in the last decade has proven to be the easiest and most accessible means of transport for many Ghanaians. It is widely patronized for its moderate fares as compared to trotros (commercial vans in Ghana) and taxis, its mobility to access routes that “normal “cars can’t ply and the ease with which they are able to meander their way out of the heavy vehicular traffic especially in the urban centers.

Pragya is gradually gaining steam as a serious commercial venture and a cursory journey around the cities and towns indicate the employment that these tricycles have offered the teeming youth who have been bedeviled with unemployment and its social concomitance. It's proven to be major source of livelihood for a number of people.

Historically, available records indicate that in the Gold coast, Colonial means of transport were basically by means of camels, donkeys, horses which were obtained from the Mahgrebian Region. With the advancement in technology consequent to the Industrial Revolution, the Gold Coast witnessed its first car under the leadership of the then Gold Coast Governor Lieutenant Colonel Sir Mathew Nathan in 1902 which was meant to be used as an experiment on the colonial roads.

Economically, the transport sector remains a key area in a developing economy like Ghana. The advent of aeroplanes, cars, ships, tricycles, motorcycles, bicycles all contributes to the development of the economy in diverse ways.

Having enumerated the benefits these vehicles offer to national development, the new wave of these tricycles christened as Pragya in Ghana is gradually becoming a national security threat and that policy makers should devise strategies to deal with the menace being inflicted on our roads. it should be emphasized that it is not only Pragya drivers that cause carnages on our roads but the point had to be made that, the transport revolution currently on display by Pragya drivers is a matter of national concern.

The blatant disregard for traffic regulations, wrongful over takings, improper parking, overspeeding, driving on the shoulders of the road among others have led to serious heartbreaks through accidents resulting in many deaths across the country. There have been several calls for the regulation of the activities of this particular enterprise. The appropriate authorities and stakeholders should take measures curb the negativities associated with this venture.

Dear Pragya, Many people have lost dear ones because of you. Children have been rendered orphans, breadwinners lost, and people have become incapacitated as a result of collisions.

As you have exhibited love and compassion in India, kindly inform your counterparts in Ghana to have affection for the citizenry. The deaths and destruction across the country calls for national discourse.