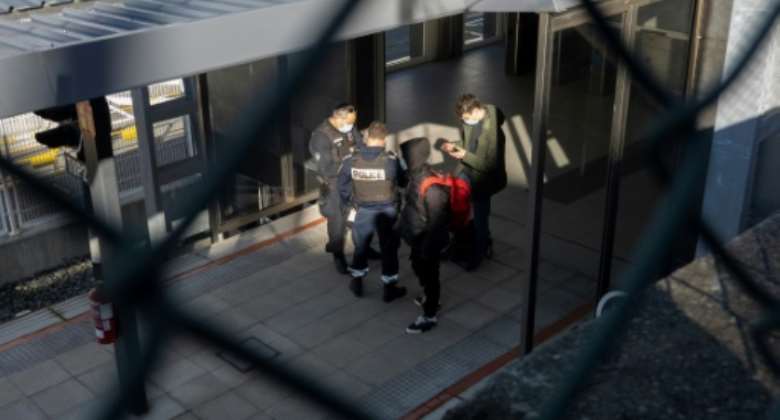 Last year, 13,164 people were turned away at the French-Spanish border in the Pyrenees-Atlantiques region of France. By ANDER GILLENEA (AFP)

"Guys, we've got to get out of here!" urges Junior, a 20-year-old migrant from Ivory Coast, breaking the tense silence inside the train crossing the Spanish border into France.

Crossing from Irun in Spain to the French border town of Hendaye is the last obstacle for young migrants desperate to reach France, their desired destination whatever the cost.

Many come from former French colonies in West Africa where French is widely spoken and want to join family members living and working in France.

But at the station in Hendaye, French police are on patrol.

With Junior are five other migrants from Mali, Guinea and Ivory Coast. But only he dares get off the train.

"You don't have a visa, you can't come here," one of the police officers tells him after glancing through his passport.

Crossing from Irun in Spain to the French border town of Hendaye is the last obstacle for young migrants desperate to reach France. By ANDER GILLENEA (AFP)

When they think the coast is clear, the other five quickly drop down onto the tracks.

"Stay where you are!" bellows a policeman, prompting one of the young migrants to race for a two-metre fence which he scrambles over, disappearing off into the streets.

But the others freeze as the police approach and give them forms marked "entry refused". They are then put back on the train to the Spanish border town of Irun, an AFP correspondent said.

With increased patrols on both sides of the border, migrants are taking ever more risks. By ANDER GILLENEA (AFP)

To get here, many of these migrants have already made the perilous journey between the African coast and Spain's Canary Islands, braving the Atlantic in barely seaworthy ramshackle boats.

Last year, 13,164 people were turned away at the French-Spanish border in the Pyrenees-Atlantiques region of France, which Hendaye is part of, more than twice that of 2020, French interior ministry figures show.

The figures are higher due to increased vigilance and more migrants travelling given the easing of Covid travel restrictions put in place at the start of the pandemic.

With increased patrols on both sides of the border, migrants are taking ever more risks, according to researchers, NGOs and local officials.

A migrant escapes running after crossing the border between Spain and France in the French Basque city of Hendaye in January 2022. By ANDER GILLENEA (AFP)

Last year, two Ivorians and a Guinean migrant drowned while trying to swim the Bidassoa River which marks the border. And in October, three Algerians who managed to cross into France died after being hit by a train.

On Santiago Bridge, which crosses the Bidassoa, French police carry out periodic checks on vehicles, while the adjacent pedestrian bridge has been closed off with huge metal fences nearly three metres (10 foot) high.

In Irun, 20-year-old Yakuba steps out from the Red Cross migrant reception centre to smoke a cigarette.

Along his nose runs a large scar he got scaling the huge spike-topped metal fence separating Spain's Melilla enclave from Morocco in June.

20-year-old Yakuba says he left Mali 'because of the war'. By ANDER GILLENEA (AFP)

"I've got one on my foot too, there was a lot of blood," shrugs Yakuba, who says he left Mali "because of the war".

After several unsuccessful attempts to cross into France over the Pyrenees, by train and finally on the Santiago Bridge, Yakuba is considering the "taxi mafia" -- smugglers who charge 150 euros ($170) to cross the border.

But in the end, he manages to cross the bridge on his second attempt.

Although France and Spain are part of the passport-free Schengen zone, routine immigration checks were reinstated following the 2015 Paris attacks that killed 130 people.

Since then, police numbers have doubled, the interior ministry says.

But rights groups claim the checks only target people based on the colour of their skin.

Rights groups claim the checks only target people based on the colour of their skin. By ANDER GILLENEA (AFP/File)

People are turned away "without any respect for their fundamental rights," explains Bilbao University law professor Iker Barbero. Even those seeking refugee status are "sent straight back" and "prevented" from claiming asylum, he adds.

"It is not the police's job to decide" whether they can claim asylum or not, he says. Nor are they permitted to turn away unaccompanied minors who, under international law, "must be protected", Barbero adds.

On the Spanish side, police speaking on condition of anonymity criticised the legal uncertainty, saying they felt "powerless" over the constant back-and-forth of migrants sent back by France and then released in Spain, but who kept trying to cross back.

France and Spain are planning to launch a new joint immigration patrol in the summer. By ANDER GILLENEA (AFP)

But one government representative in France's Pyrenees Atlantic region, Theophile de Lassus, rejects such allegations. He says entry rules "apply to everyone" and are "fully respected".

Migrants "who choose to enter without applying for a visa or a residency permit are turned away," he told AFP, rejecting claims migrants were not always informed about their rights and that minors were sent back.

In 2019, only four percent of illegal migrants arrested in Spain's San Sebastian province, where Irun is located, were sent back to their country of origin, according to internal data consulted by AFP.

France and Spain are planning to launch a new joint immigration patrol in the summer.

But Junior is not put off.

"It can't be worse than crossing the Atlantic, so we're not going to be put off now."