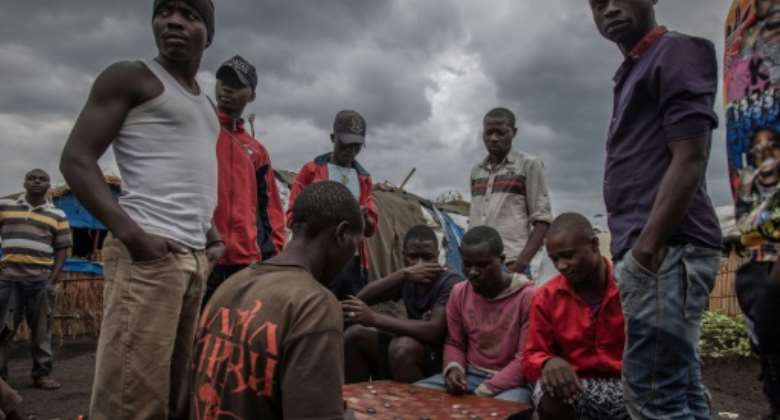 Ex-combatants play a game of checkers to pass the time at the Mubambiro cantonment camp. By Guerchom NDEBO AFP

Hundreds of militiamen who heeded government calls to lay down their weapons in war-torn eastern DR Congo have become so disillusioned with life in their sordid cantonments, they are returning to the bush.

"Having given up guns for peace, we had expected to be well treated," says Tumaini Bivundi, who fought with the Hutu militia Nyatura.

Scores of armed groups have long roamed the mineral-rich east of the Democratic Republic of Congo, a legacy of regional conflicts that flared a quarter century ago.

Today 26-year-old Bivundi is the leader of the 600-odd former rebels known as the "surrendered" at camp Mubambiro.

The small huts that make up the camp also house 200 dependents at the site 20 kilometres (12 miles) from the Nord Kivu provincial capital Goma.

Those who surrendered have been promised three meals a day. By Guerchom NDEBO AFP

At the start of the month, the ex-militiamen demonstrated against the harsh living conditions at Mubambiro.

The army dispersed the protesters and one of them, called Faustin, was killed.

He is buried in the cemetery at the back of the camp where at least 13 others have been laid to rest. Most died from water-borne diseases.

"He was my brother," Muhindo Syauswa, also a former militiaman, tells AFP, pointing to the grave marked with a white cross.

Inside the camp, two young wives, are combing their hair under the pale sunlight outside their cabin.

Not far off, men have gathered for a game of checkers.

The surrendered militiamen have demonstrated against the terrible conditions at Mubambiro cantonment camp. By Guerchom NDEBO AFP

"It helps us to forget for a while the life we have here, after the failure of the government to take care of us," says 35-year-old Jimy Mazimpaka, formerly a "mai-mai" community militiaman.

Kavira Furaha Anourite was also in the mai-mai and at the age of 18 has a six-month-old baby with another ex-combatant.

"We don't even have mattresses, we sleep on the sand without any covers," she says. "When it rains it's terrible."

The only meal of the day arrives late in the afternoon and consists of beans cooked with maize flour to make a sort of dough called "foufou".

"This is what we have been eating for three years," says Bahati Safari, aged 28.

There are no plates, some use plastic bottles with their tops cut off.

The women are not allowed to eat the official food and have to make do themselves.

"We are suffering, it's high time this was over," one of the women sighs.

Under a military tent, four men are sharing a single cigarette.

Innocent Sibomana is stretched out close by on a makeshift bed.

"I've been sick for three days but I don't have any medicine," he says.

The sole meal of the day arrives late in the afternoon. By Guerchom NDEBO AFP

Cases of cholera have been reported occasionally at the camp, which has just one latrine, with a ground sheet for walls.

Jacques Katembo , who runs the government's militia demobilisation and reinsertion programme in North-Kivu, recently admitted that because of the conditions, more than half the militiamen men who surrendered and joined the camp had since "gone back to the bush".

Several official attempts to demobilise the militias over the years have had only limited success.

North Kivu and neighbouring Ituri province have been under an official "state of siege" since May, in a bid to step up a military offensive against the rebels.

Women dependents in the camp have to make do. By Guerchom NDEBO AFP

Programme coordinator Tommy Tambwe visited Mubambiro on January 14, and promised a team would be sent within two weeks to carry out identity checks.

Some of the surrendered say they want to enrol in the army, others just want to go back home.

They are waiting for a document attesting to their demobilisation and a small sum of money to help their return home.

Fulgens Ushindi, a Hutu, has had enough of war.

"I have received your requests and I can assure you that you will start eating three meals a day," says Tambwe, also once a militiaman.

David Musema, another ex-rebel, has his doubts.

"We are used to hearing their promises, the president promised the same thing but nothing was done," he notes.

Despite the situation, more militiamen have arrived at Mubambiro in recent days looking to be demobilised.

Roll call at the camp. By Guerchom NDEBO AFP

"If we get a good reception, we will call the others who stayed behind in the bush," says self-styled colonel Claude Amani.

Another camp, similar to Mubambiro, operates at Rumangabo, 30 kilometres further away from Goma.