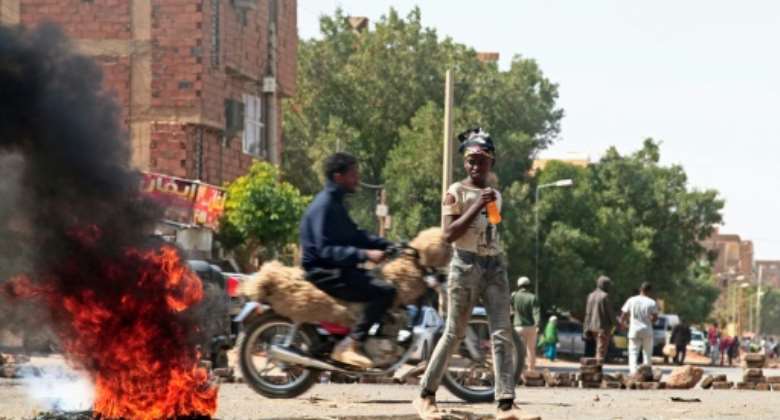 Sudanese demonstrators barricade a street in Khartoum Tuesday amid ongoing protests against a military coup. By - (AFP)

Sudanese shuttered shops and barricaded streets with burning tyres and rocks Tuesday, staging angry rallies to protest against one of the bloodiest days since a coup derailed the country's democratic transition.

Security forces on Monday opened fire killing at least seven people as thousands marched against the army's October 25 takeover, taking the total number killed in a crackdown since the coup to 71, according to medics.

"No, no to military rule," protesters chanted in southern Blue Nile state, where some carried banners daubed with the slogan "No to killing peaceful protesters", said witness Omar Eissa.

The protests come as Washington ramps up pressure in a bid to broker an end to the months-long crisis in the northeast African nation, with top US diplomats expected to arrive in the capital Khartoum for talks.

Sudan's main civilian bloc, the Forces for Freedom and Change, called for two days of civil disobedience to begin on Tuesday.

Sudanese demonstrators used rocks to barricade streets on Tuesday after one of the deadliest days in weeks of protests against a military coup. By - (AFP)

"Shop closed for mourning," said a series of small signs posted on the closed outlets at the sprawling Sajane construction supplies market in Khartoum. One of the merchants, Othman el-Sherif, was among those shot dead on Monday.

Protesters -- sometimes numbering in the tens of thousands -- have regularly taken to the streets since the coup led by General Abdel Fattah al-Burhan nearly three months ago.

After Monday's deaths, the United Nations special representative Volker Perthes condemned the use of live ammunition, while the US embassy criticised "violent tactics of Sudanese security forces," the latest such appeals by world powers, which have not curbed a rising death toll.

On Tuesday, police fired tear gas at dozens of protesters setting up roadblocks in east Khartoum, an AFP correspondent said.

In several other parts of Khartoum, many pharmacies and other shops were shuttered, according to an AFP correspondent.

Sudan's University for Science and Technology suspended all activities as part of the civil disobedience, according to an official statement.

Outside the capital, hundreds of protesters also staged demonstrations in other cities, witnesses said.

"We took to the streets to protest the massacre that the security forces committed in Khartoum yesterday," said protester Hassan Idris, in the eastern state of Kassala.

Burhan on Tuesday formed a fact-finding committee to probe Monday's violence, with its findings to be submitted within 72 hours, Sudan's ruling Sovereign Council said in a statement.

It comes as US Assistant Secretary of State Molly Phee and special envoy for the Horn of Africa, David Satterfield, were expected in Khartoum, where they would "reiterate our call for security forces to end violence and respect freedom of expression and peaceful assembly," spokesman Ned Price said.

On Monday, Sudan's police said they used "the least force" to counter the protests, in which about 50 police personnel were also wounded.

Sudan's authorities have repeatedly denied using live ammunition against demonstrators, and insist scores of security personnel have been wounded during protests. A police general was stabbed to death last week.

On Tuesday the "Friends of Sudan" -- a group of Western and Arab nations calling for the restoration of the country's transitional government, and which includes the US, European Union, Saudi Arabia, the United Arab Emirates and the UN -- held talks in Saudi Arabia.

"Deep concern about yesterday's violence," the UN envoy Perthes said on Twitter, after attending the meeting via video link.

"International support and leverage is needed. Support for political process needs to go along with active support to stop violence."