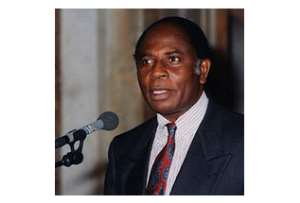 In the 1960s, whilst editing Drum Magazine, I travelled to Kumase to interview one of the most popular guitarists in Ghana at the time, Kwabena Onyina.

Onyina's music was distinct: he played the guitar but sang in a beautiful tenor, which was strange enough, as the leading contemporary singers of the time, including the immensely popular Kwabena Okai of EK's Band (Akan Trio), tended to sing what was to a large extent, falsetto treble.

But it wasn't his voice alone that made Onyina stand out. He had the knack of using stories drawn from everyday life, to make his point.

And the point? What was it? It was to encourage his listeners to adopt a philosophical approach to life and thereby shore up their psyches to enable them survive the grief which life was wont to throw in their path.

For instance, while recounting the death of someone, Onyina urged the survivors of the dead man not to “lament” too much, because death, whilst difficult to bear, did have some hidden “benefits” to bequeath to us, such as leaving those left behind, a legacy or economic inheritance:

[Cry no more Akwasi, for it's death that leaves us money cloth and things of that nature.]

Onyina's philosophical approach to life was explained to me by the fact that when I went to visit him in Kumase to discuss his technique and other attributes, I was immensely found, as his guitar companion who was practising a song with him, no less a man than a famous lecturer in philosophy at the University of Ghana, called Kwasi Wiredu.

Wiredu was learning how to play the guitar at the feet of Onyina, and whilst benefiting from the natural talent of the hi-life master, he , on his part, exposed Onyina to the work of great jazz guitarists like Kenny Burrell. That, to the knowing ear, explained the unique complexity with which Onyina approached guitar playing. Wiredu, the philosopher apparently ensconced in the “ivory tower” of Legon, was responsible, in no small measure, for the rich content of both the music and lyrics of Ghana's most prominent guitar artist of the time.

Quote: KWASI WIRREDU Displayed prowess in another area while in high school. He became an ardent student of the guitar, and quickly became terrifically accomplished. His first master, I believe, was ONYINA, the king of High Life music. Even though Kwasi called Onyina his master, it was the student who was to broaden and deepen the teacher's guitar skills.

Acknowledging this, a blurb on Kwabena Onyina says of Kwasi "(Onyina) is also grateful to Professor J. E. Wiredu, then a philosophy student, domiciled in Ashanti New Town, who provided him with music of contemporary great guitarists like Barney Kessel, Tal Farlow, Laurindo Almeida and Kenny Burrell and some others which helped to broaden his skills".

His second great master was KOO NIMO, the prodigy who was playing the organ in church services at the age of six. Both Onyina and Koo Nimo are internationally acclaimed kings of Ghanaian music. Kwasi is adept at African music, classical music and Jazz. His fascination with guitar music has brought joy to countless friends. Kwasi did not eschew lesser lights. He spent time with others like "Tricky Johnson" of the Tempos band and "Bob Mensah" of the Willben band. – PROF. WILLIAM ABRAHAM Unquote

The sad death of Kwasi Wiredu, was reported on Twitter on 8 January 2022 by his fellow African scholar of great renown, Kwame Anthony Appiah, in these words:

QUOTE: Kwasi Wiredu, one of the greatest of African philosophers, has died at the age of 90. If you don't know about him, you should. He was an unbelievably decent man; I know because he was my first departmental Chair. UNQUOTE

The world-famous scholar who knew Wiredu best was his classmate and fellow student at Oxford University, Professor William Abraham. Abraham, the first African to be awarded a Prize Fellowship at Oxford ( the Prize was won by examination!) was a mate of Wiredu's at Adisadel College, before they both went to Oxford.

An astonishingly affectionate speech given by Willie Abraham on Kwasi Wiredu at Wiredu's 85th birthday, shows clearly that the two philosophers respected each other immensely. It is not often that one hears a Ghanaian who had achieved much in his field, speaking so admiringly of a fellow Ghanaian who is a practitioner of the same “trade”, so to speak:

QUOTE: No one (Abraham revealed) has had a more decisive influence on my life, and that includes my own parents. I was undecided between English Literature and Mathematics when we entered College. I was very pleased with the literature classes that I was taking. Then one day, Kwasi accosted me. He asked whether I was aware that if I persisted with my present course of action, I would be apt to spend my old age writing poems about sunsets. That did not seem appealing, so I switched my attention to Mathematics...

“ I was not prepared for what he had in mind. He invited me to sit in on his Logic and Ethics classes, which I did, much to my enjoyment. Not knowing how to keep my mouth shut as a guest, I attracted the attention of his teachers..... When the time came to take the Qualifying Exams to pursue an Honours course, I could not break the teachers' hearts and so I sat for the Philosophy exams instead of the Math exams. Kwasi had always known what he wanted to become: a philosopher. He became a Philosopher's Philosopher,' as STUART HAMPSHIRE was to describe him in graduate school at Oxford.

Kwasi was leader of the group that collected around him. The group included Kwabena Tufuoh, who became a civil servant; Thomas Mensah, who became a distinguished lawyer; and S.K. Riley Poku, who later became Ghana's Minister of Defence [in the Hilla Limann regime.] UNQUOTE

Prof William Abraham further described Kwasi Wiredu,– with immense generosity, considering that he is entitled to the accolade himself, in his own right – as “truly, the mind of Africa.”

Abraham, who is a former Pro-Vice Chancellor of the University of Ghana, Legon, went on in similar vein: “I do not know anyone, in person or by repute, whose thinking is as penetrating or as comprehensive. Early in his career, the subtlety and depth of his mind were compared to EDMUND HUSSERL'S in a review of the best articles in the journal Mind. He is the only African named among the world's greatest hundred philosophers.

“Let it be also said that I personally never met a more upright person. If this man thought that a course of action would be wrong, he would be simply incapable of pursuing it. If you [had] him for a friend, you [had] a friend for life. I have never heard anyone, or heard of anyone, who had anything ill to say of him. He truly [was] a rare sort of human being, in both intellect and character.”

Now, I want you to remember that these words do not fall into the class of the panegyric effusions that are usually uttered at the death of a person. No! They were said in public, when Kwasi Wiredu was still alive! That says much for the stature of the man, Kwasi Wiredu, doesn't it? Abraham spoke freely of what he felt about his friend, because he knew that Kwasi Wiredu wasn't the type of man who would allow such encomiums to make him swollen-headed.

Professor Wiredu, hailed as “one of the greatest of African philosophers,” was known for his work on logic, language, truth, personhood, ethics, and the nature of philosophy, as well as for extensive work in and about African philosophy. Wiredu argued for including elements of folk knowledge from African cultures in philosophy, subjecting them to critical philosophical scrutiny, while also calling for “conceptual decolonization” in African philosophy: avoiding or reversing, through a critical conceptual self-awareness, the unexamined assimilation, in our thought (that is, in the thought of contemporary African philosophers) of the conceptual frameworks embedded in the foreign philosophical traditions that have had [an] impact on African life and thought…[and] exploiting as much as is judicious the resources of our own indigenous conceptual schemes in our philosophical meditations on even the most technical problems of contemporary philosophy. (Cultural Universals and Particulars, p. 136)

Wiredu is the author of, among other things, the books Philosophy and an African Culture (1980), and Cultural Universals and Particulars: An African Perspective. You can learn more about his work here and here.

In one of his well-known essays, “How Not to Compare African Traditional Thought with Western Thought,” Wiredu writes: The African philosopher has good reason to study African folk thought. Africans are a much oppressed and disparaged people; some foreigners have not even conceded that Africans, as a traditional people, were capable of a coherent world-view.

“Many colonial anthropologists sought to render the actions and attitudes of our forefathers intelligible to their colonial rulers,so as to facilitate governance. While some brilliant insights resulted, there were misinterpretations and factual errors as well. Africans cannot leave the task of correction to foreign researchers alone. Moreover, there are, particularly in the field of morality, conceptions not based on superstition; the Westerner may well have something to learn from them. The exposition of these aspects of African traditional thought especially befits the contemporary African philosopher. But African philosophers should approach this material critically: all peoples who have made any breakthrough in the quest for modernization, have done so by going beyond folk thinking. Sifting through the elements of our traditional thought and culture will require a good measure of analytical circumspection. Otherwise, we might exchange the good, as well as the bad, in our traditional ways of life, for dubious cultural imports.

Court adjourns case between Asanko Gold and GMWU to June 1 o...
26 minutes ago