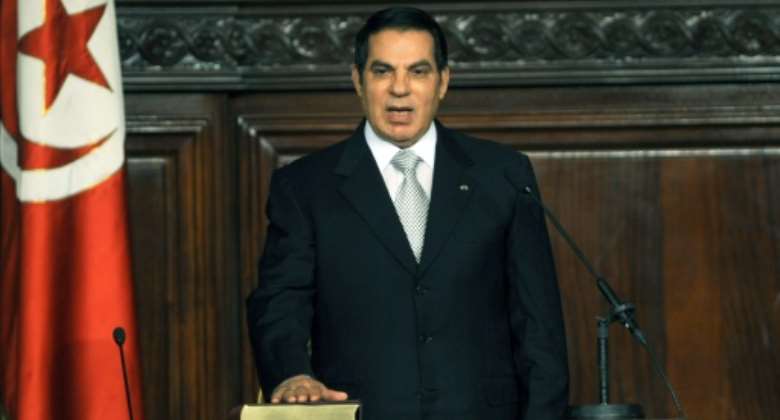 Zine El-Abidine Ben Ali ruled Tunisia with an iron fist for nearly a quarter of a century before his fateful flight to Saudi Arabia in the first of the Arab Spring revolutions of 2011. By FETHI BELAID (AFP/File)

Toppled Tunisian dictator Zine El Abidine Ben Ali was mulling a return home even as he was aboard a plane taking him into exile in 2011, according to a recording published by the BBC on Friday.

The audio excerpts, if genuine, offer a rare insight into the final hours of the late autocrat's 23-year-rule.

The British broadcaster released them on the 11th anniversary of Ben Ali's flight to Saudi Arabia on January 14, 2011, following four weeks of vast street protests.

They appear to be of calls Ben Ali held with key allies including his defence minister and the chief of the army.

The BBC said it had checked the recordings with forensic experts who found no evidence they were fakes. It also checked them with people familiar with their participants, who said they could identify the speakers.

In one call the night before his departure, a man believed to be tycoon and Ben Ali confidant Tarak Ben Ammar congratulates the president on a speech earlier in the day in which he had assured the public "I got the message".

But the autocrat tells Ben Ammar his speech had lacked fluency.

The next day, demonstrations mount further and arrangements are made to get Ben Ali out of the country.

In a later call apparently from the plane to Saudi Arabia, the dictator asks a man -- apparently defence minister Ridha Grira -- about the situation on the ground back home.

Grira says an interim president has taken office. Ben Ali responds that he will be back in the country "in a few hours".

In another call, he speaks with someone believed to be confidant Kamel Eltaief.

"The situation is changing rapidly and the army isn't enough," Eltaief says.

Ben Ali interrupts him: "Do you advise me to come back now or not?"

Ben Ali would never set foot in Tunisia again, dying in exile in Saudi Arabia in 2019.

The 11th anniversary of his fall comes amid a deep political and economic crisis in Tunisia after President Kais Saied last July sacked the government, froze parliament and seized an array of powers.

Some Tunisians tired of the corrupt post-revolution system welcomed those moves, but Saied's opponents call the measures a coup and warn he is returning the country to a Ben Ali-style autocracy.