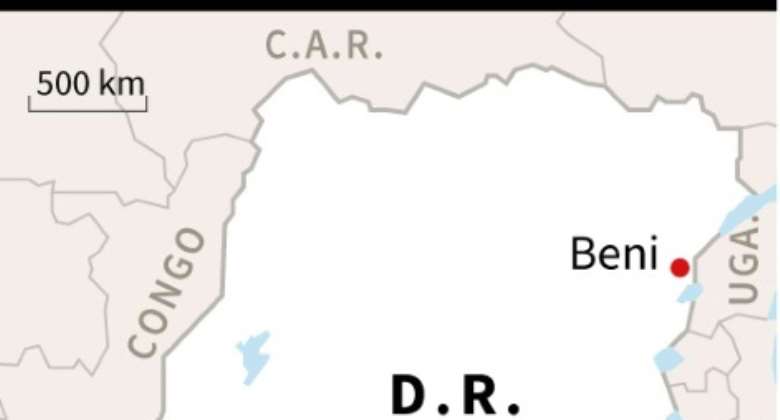 Beni, in Ituri province, on the DRC's eastern border with Uganda, has been the site of regular clashes. By Vincent LEFAI (AFP/File)

A suicide bomber killed at least five people at a crowded night spot in the city of Beni, in the eastern Democratic Republic of Congo Saturday, local officials reported.

"The suicide bomber, prevented by security from gaining access to the bar, packed with clients, activated the bomb at the entrance," said a statement from military officials running the North Kivu province.

Another 13 people were being treated for their wounds in hospitals, the statement added, describing the death toll as provisional. The statement blamed the attack on the Allied Democratic Forces (ADF), the deadliest of the militia active in the region.

Shortly after the blast, Narcisse Muteba, the colonel running the city during the state of emergency in the east of the country, had called on residents to return to their homes for their own safety.

Shortly after the attack, an AFP correspondent saw the remains of three bodies at the site of the blast, the In Box restaurant. The remains of tables, chairs, bottles and glasses were scattered across the blast site.

One city hall source told AFP that two children were among the dead, as well as two local officials.

More than thirty people were celebrating Christmas there when the bomb went off, two witnesses told AFP.

"I was sitting there," local radio presenter Nicolas Ekila told AFP. "There was a motorbike parked there. Suddenly the motorbike took off, then there was a deafening noise."

A police vehicle took the wounded to a nearby medical centre, which was immediately sealed off.

Operations against the ADF

On June 27 in Beni, a blast from a homemade bomb at a Catholic church wounded two women, the same day a man died when the bomb he was carrying went off.

The day before, another device blew up near a service station without doing any damage. The authorities blamed those attacks on the ADF.

Beni, in Ituri province, on the DRC's eastern border with Uganda, has been the site of regular clashes between the army and the ADF.

Ituri and neighbouring North Kivu province have been under a "state of siege" since May, an emergency measure in which the military has taken effective control but which so far has not succeeded in stopping the attacks from the armed militia.

On November 30, the DRC and Uganda launched a joint operation against the ADF in the east of the country to try to quell the bloody ADF attacks. Uganda has also blamed the group for a string of attacks on its territory.

But it established itself in eastern DRC in 1995, becoming the deadliest of scores of outlawed forces in the troubled region.

It has been blamed for the killings of thousands of civilians over the past decade in the DRC, as well as for bombings in the Ugandan capital Kampala.