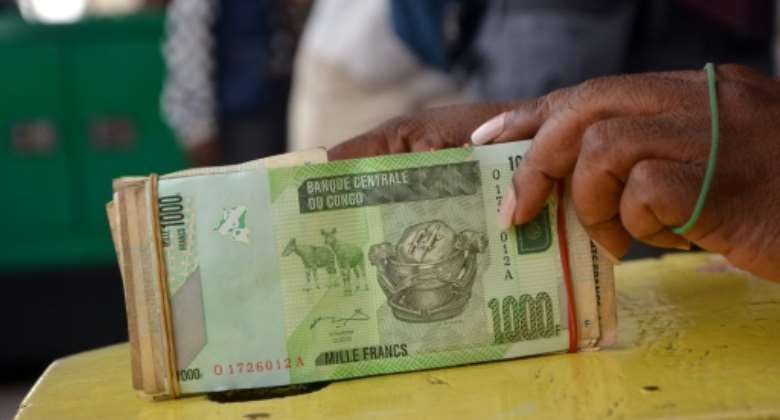 The US government is targeting the laundering of dirty money with a new anti-corruption policy. By Junior D. Kannah (AFP)

The US Treasury said Alain Mukonda helped reorganize Gertler's businesses and transferred millions of dollars for him after the Israeli tycoon's oil and mining businesses in DRC were hobbled by earlier sanctions.

Mukonda set up companies for Gertler and moved between $11 million and $13.5 million into them, the Treasury said, helping Gertler skirt sanctions aimed at blocking him from accessing the global financial system.

"Treasury is committed to supporting the Democratic Republic of the Congo's anti-corruption efforts by going after those that abuse the political system for economic gain and unfairly profit from the Congolese state," said Treasury Deputy Secretary Wally Adeyemo in a statement.

The announcement came as the White House unveiled its "first-ever US government strategy on countering corruption."

The core aim of the strategy, which comes ahead of International Anti-Corruption Day on Thursday, is to tighten regulations on US real estate transactions to prevent them from being used to launder money earned through trafficking, embezzlement or bribes.

It also aims to increase financial transparency by better identifying who is behind shell or front companies.

"As a fundamental threat to the rule of law, corruption hollows out institutions, corrodes public trust, and fuels popular cynicism toward effective, accountable governance," the strategy document said.

Congress passed a law in January requiring US companies to declare their beneficial owners to the federal government. This marked a breakthrough in the United States, where laws on the matter are extremely flexible, in particular in Delaware, Biden's home state.

The White House wants to better regulate real estate transactions, particularly when made in cash.

"With the United States being the world's largest economy, we understand that we bear particular responsibility to address our own regulatory deficiencies," a senior administration official said.

In a report published in August, the Washington think tank Global Financial Integrity (GFI) estimated that in the last five years, at least $2.3 billion in dirty money had been laundered through real estate transactions in the United States.

"Yet the US remains the only G7 country that does not require real estate professionals to comply with anti-money laundering laws and regulations," it said.

The sanctions on Mukonda are part of a growing US effort against key figures whose alleged corruption retards development in poorer countries.

Gertler, a close friend of former DRC President Joseph Kabila, was first sanctioned by the United States in 2017 for allegedly cheating the country of about $1.4 billion in revenues through opaque mining deals.

With Mukonda, 46 people and entities in Gertler's network have been placed on the US Treasury blacklist.

The Treasury said it "is committed to ensuring that Gertler is not able to corruptly profit from continued access and influence in the DRC and globally."

The Treasury added that it plans to announce a series of sanctions this week in the lead-up to International Anti-Corruption Day and, on Friday, International Human Rights Day.