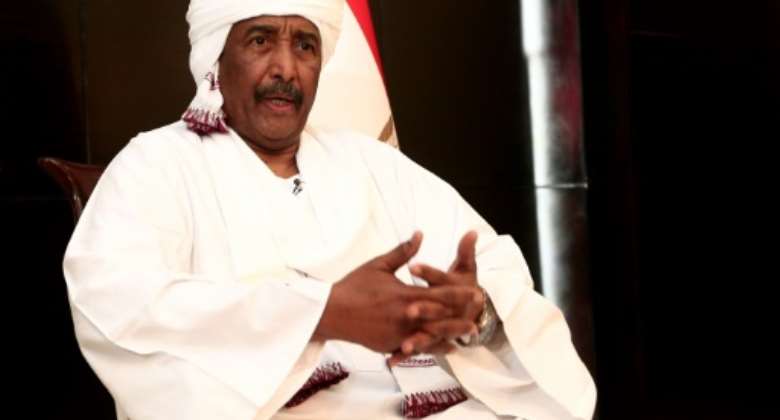 Sudan's top general Abdel Fattah al-Burhan ousted the civilian government and declared a state of emergency on October 25, in a move that upended a two-year transition to civilian rule. By Ebrahim HAMID (AFP)

Burhan -- Sudan's de facto leader since the ouster of president Omar al-Bashir in April 2019 -- removed the civilian government and declared a state of emergency on October 25, in a move that upended a two-year transition to civilian rule.

The power grab triggered a wave of international condemnation and several punitive measures, with the World Bank and the United States freezing aid, a blow to a country already mired in economic crisis.

The African Union has also suspended Sudan's membership over what it termed the "unconstitutional" takeover.

The military's move triggered mass anti-coup protests which were met by a bloody crackdown that killed at least 44 people, according to an independent union of medics.

"The international community including the African Union is watching what will happen in the coming days," Burhan told AFP in an interview.

"I believe there are positive indicators that things will return (to how they were) soon. The formation of a civilian government will put things back in order."

Burhan's interview with AFP was one of a series he gave to international media a day after UN chief Antonio Guterres called Sudan hostile to journalists in a report submitted to the Security Council.

On November 21, Burhan signed a deal to reinstate Prime Minister Abdalla Hamdok who was ousted in the coup and kept for weeks under house arrest.

The Burhan-Hamdok agreement was welcomed by the United Nations, the African Union and Western Arab countries.

But critics have lambasted it as "whitewashing" and accused Hamdok of "betrayal", with pro-democracy activists vowing to maintain pressure on the military-civilian authority.

The top general has long insisted the military's move on October 25 "was not a coup" but a step "to rectify the transition".

Hamdok, who has been prime minister in the transitional government since 2019, has defended the deal, which he signed after he was released from effective house arrest.

He has said he partnered with the military to "stop the bloodshed" and to "not squander the gains of the last two years".

Prior to the coup, Sudan was led by civilian-military ruling council under an August 2019 power-sharing deal that outlined a transition to civilian government after Bashir's three decades of iron-fisted rule.

Burhan has previously said he had no intention to run for president following the lapse of the transition.

Military can run for election

On Saturday, he said other military and paramilitary members of the transition could be able to run for office in the July 2023 elections.

The August 2019 deal, he said, had "included a clear clause that all participants of the transitional period will not be allowed to take part of the following period."

But a landmark 2020 peace deal with rebel groups "granted participants to the transitional period the right to become part of the government" that followed the transition, he said.

Asked whether military and paramilitary members of the transition could run for the elections, Burhan answered "yes".

Burhan and Hamdok had agreed to make amendments to the August 2019 power-sharing deal.

"There is work now on a new political charter as stated on November 21, to be agreed upon by political forces and to determine the rest of the transitional period until the elections are held," Burhan said.

He said "all political forces" will be part of that deal apart from Bashir's defunct National Congress Party.

Since the coup, Burhan has removed clauses referring to the Forces for Freedom and Change -- an umbrella group which spearheaded the protests against Bashir -- from the 2019 power-sharing deal.

In November, Burhan formed a new Sovereign Council, the highest transitional authority, with himself as chief, and military figures and ex-rebel leaders keeping their posts

Hamdok has maintained that he has "full freedom" to choose members of his cabinet after the coup, provided that they are "indepdenent" and "non-partisian".

It was not clear yet whether ministers from ex-rebel groups, who signed the 2020 peace deal in Juba and were part of the deposed cabinet, would be included.

"There is a discussion on whether to keep these rights as stated in the agreement or find any other solution," Burhan said.

If they are to be excluded from the next cabinet, "it has to be with their consent."

Aluta Continua: We are unable to call off strike – UG-UTAG t...
34 minutes ago