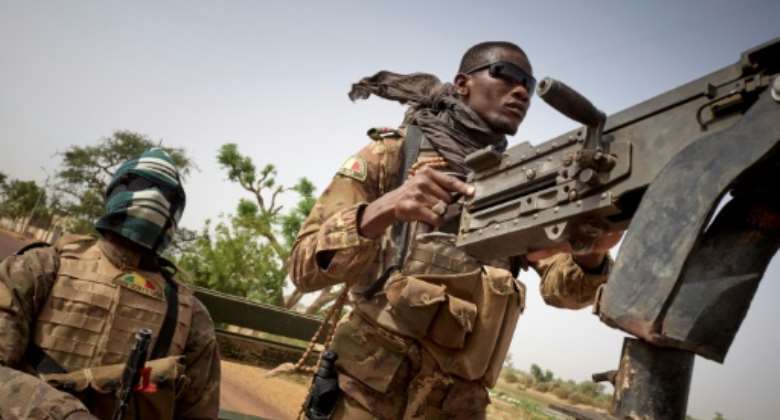 Malian soldiers on patrol between Mopti and Djenne. By MICHELE CATTANI (AFP/File)

Suspected jihadists in Mali killed at least 30 civilians in an attack on a passenger vehicle in the volatile central town of Mopti, officials said Saturday.

Mali's transitional government said in a statement broadcast on state TV that 31 people were killed and 17 injured and vowed to do everything necessary to "arrest and punish" the perpetrators.

"The passengers were sprayed with bullets and the vehicle was torched," during an attack by "terrorists" near the town of Bandiagara on Friday, a local official told AFP.

"The state has sent security forces to the scene," they said, speaking on condition of anonymity.

An elected representative in Bandiagara confirmed the death toll, saying the victims included women and children.

The attack has not been claimed by any of the numerous armed groups active in the West African country.

Head of the transitional government, strongman Colonel Assimi Goita, declared three days of national mourning from Sunday during which flags will be flown at half mast on all government and public buildings.

The Bandiagara development association condemned the "cowardly and criminal act" and called on the authorities to bring the perpetrators to justice.

Map showing zones of influence by armed groups in the Sahel.. By (AFP/File)

Mali has been struggling to contain an Islamist insurgency that first erupted in the north in 2012 and has since claimed thousands of military and civilian lives.

Despite the presence of thousands of French and UN troops, the conflict has engulfed central Mali and spread to neighbouring Burkina Faso and Niger.

Central Mali has become one of the most violent hotspots of the Sahel-wide conflict, where ethnic killings and attacks on government forces are frequent.

A military junta overthrew the government last year after mass protests against the violence, but the new rulers have not managed to stem the bloodshed.

The West African regional grouping ECOWAS last month imposed new sanctions on Mali and called for it to honour a timetable for a return to democracy.

The situation in the country has raised concerns internationally, prompting a UN Security Council delegation to Mali in October.

Swathes of Mali, a vast nation of 19 million people, lie outside of government control because of the jihadist insurgency.

France, the former colonial power in the Sahel, has about 5,100 troops deployed across the region, helping to support countries where governments are weak and the armed forces poorly equipped.

The French military first intervened in 2013 to beat back the jihadist insurgency in northern Mali.