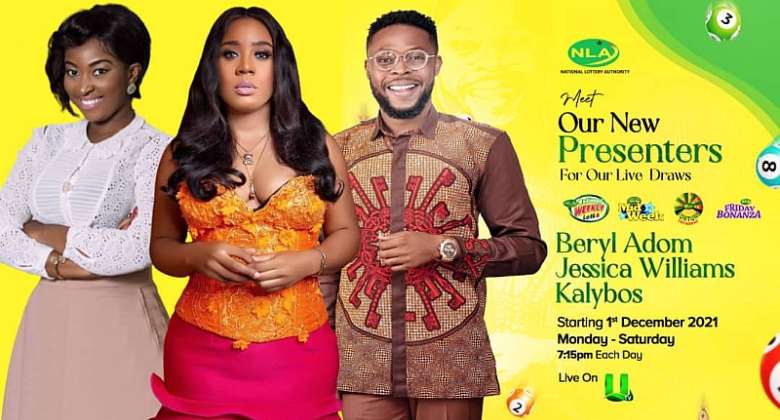 The two will Present NLA LIVE DRAWS on UTV from Wednesday, December 7 from 7:15pm to 7:30 pm from Monday to Saturday as part of the new Director General’s restructuring exercise.

It is expected that the inclusion of the versatile actor and actress will spark the interest of the Ghanaian public in live draws which has been given a boost by the current administration.

It would be recalled that last month, Management of the NLA announced that UTV takes over from the Ghana Broadcasting Corporation (GBC) the rights to broadcast the NLA live draws for decades.

A press statement released on Thursday, November 25, 2021, by the NLA management revealed the new change takes effect from December 1, 2021.

The statement added that the station will broadcast the live lotto draws from Mondays to Saturdays between 7:15pm and 7:30pm.

"The National Lottery Authority wishes to announce to the general public, its cherished patrons and stakeholders that with effect from Wednesday 1st December, 2021, its Live Lotto Draws would be televised on United Television (UTV) ONLY. UTV will televise NLA's Live Lotto Draws every Monday to Saturday from 7:15pm to 7:30pm," the statement revealed.

What's the big deal if military is withdrawn from Speaker Ba...
44 minutes ago

Bogoso explosion: 500 houses blown into pieces at Appiatse
46 minutes ago