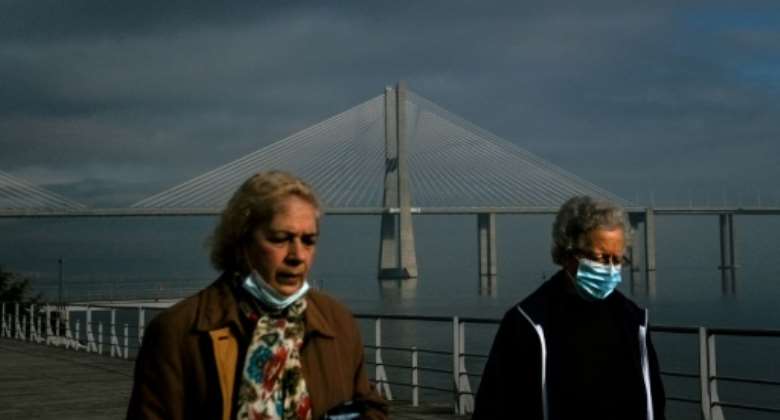 The WHO warned Wednesday that a "toxic mix" of low rates of immunisation and testing were fanning new Covid-19 variants as Europe's top official said it was time to "think about mandatory vaccination".

The Omicron variant, first reported to the World Health Organization by South Africa a week ago, has spread rapidly across continents, darkening economic forecasts and deepening fears of another difficult winter in the northern hemisphere.

"Globally, we have a toxic mix of low vaccine coverage, and very low testing -- a recipe for breeding and amplifying variants," said WHO chief Tedros Adhanom Ghebreyesus, reminding the world that the Delta variant "accounts for almost all cases".

Watching Omicron: why the spike matters. By John SAEKI (AFP)

The WHO says it could take several weeks to understand whether or not Omicron is more transmissible, and whether it results in more severe disease -- plus the effectiveness of treatments and vaccines against the variant.

Its detection and spread, however, have highlighted that the now nearly two-year global fight against Covid-19 is far from over.

In Brussels, European Commission President Ursula von der Leyen said it was "understandable and appropriate" to discuss how to "encourage and potentially think about mandatory vaccination" in the bloc -- although only individual member states can impose vaccine mandates.

Austria has already said it will make Covid jabs compulsory next February, Germany is mulling following suit and Greece on Tuesday said it will mandate vaccines for over-60s.

Even nations with high vaccination rates are struggling to contain rising infection numbers and prevent health services from being overwhelmed. By Thomas SAMSON (AFP)

The European Centre for Disease Prevention and Control recommended that children aged five to 11 who are at risk of severe Covid should be considered a "priority group" for vaccination.

Global economic body the OECD warned Omicron threatens the world's recovery and lowered growth estimates for 2021 from 5.7 percent to 5.6 percent.

The Paris-based organisation said the recovery had "lost momentum and is becoming increasingly imbalanced" and would remain "precarious" until vaccines were deployed worldwide.

The WHO has opposed blocking travel from countries where new variants are first spotted, fearing it could dissuade diligent surveillance and reporting.

Portugal, which has Europe's highest vaccination rate, reintroduced measures to stem infections on Wednesday, including mask mandates in indoor settings, and aims to administer a third Covid jab to almost one-fifth of its population by the end of the year.

From Wednesday, every adult in Italy became eligible for a Covid booster shot, previously only open to those aged over 40.

Yet despite new restrictions recently introduced in Denmark, the country on Wednesday registered a record number of new Covid cases with 5,120 infections in the last 24 hours.

Besides Japan, other governments in Asia also expanded curbs, with Indonesia adding Hong Kong to its travel ban list, and Malaysia doing the same with Malawi.

Fiji ended 615 days of international isolation on Wednesday and reopened to tourists. By Leon LORD (AFP)

"A lot of my neighbours and friends died of Covid-19," said Jakarta resident Jan Pieter Tobing. "Coronavirus is the real deal. So the emergence of Omicron is very terrifying. Honestly, it's scary."

France bucked the trend by announcing flights from southern Africa could land on its territory from Saturday, but only allowing French and EU residents, diplomats and flight crews to disembark.

Even as governments acted unilaterally in imposing travel restrictions, WHO member states came together in Geneva to work on an international accord on handling the next pandemic.

An intergovernmental negotiating body will be established to reach an agreement on responding to future pandemics with a first meeting due before March 1, 2022.

While the European summer of fleeting Covid freedoms may be over, in the southern hemisphere, Pacific nation Fiji ended 615 days of international isolation on Wednesday and reopened to tourists.

Traditional dancers in grass skirts welcomed waving holidaymakers from Sydney, the first of an expected flood of desperately needed tourists in the coming weeks.

Fiji Airways chief executive Andre Viljoen said it was a "momentous" occasion for the country, where tourism accounts for about 40 percent of the economy.