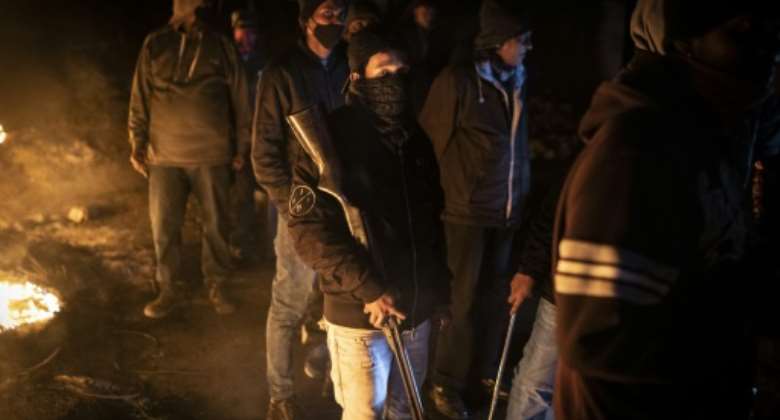 Vigilante groups stepped in to tackle unrest in South Africa in July, taking matters into their own hands and sometimes stoking violence as security forces struggled to restore order. By GUILLEM SARTORIO (AFP/File)

The unrest that gripped the country in early July was the deadliest since the fall of the white-minority government.

Yet many people appear to have moved on in a country that has grown accustomed to a high crime rate with its accompanying sporadic outbreaks of violence.

Monday's hearing though was a grim reminder of how harrowing the riots were.

Witnesses described how teargas was fired into homes and loved ones were shot by vigilantes who themselves were often driven to violence by sheer terror at the lacklustre police response.

The hearings took place outside of Durban, an important port city in KwaZulu-Natal, that suffered the brunt of the violence.

But the only live coverage was carried by the commission itself on social media, with a feed that frequently cut out.

The riots began when former president Jacob Zuma, whose base of support is in KwaZulu-Natal, was sent to prison for refusing to testify in corruption proceedings against him.

Those initial protests degenerated into looting that spread to Johannesburg, in a show of discontent with South Africa's gaping divide between rich and poor.

The slow response by police prompted some residents to resort to vigilantism before President Cyril Ramaphosa deployed the military.

The first witness, Zama Nguse, said that was how her 17-year-old nephew Sibahle was killed.

She said businesspeople in Durban, angry at the looting of their shops, set fire to shacks and shot at people in her community -- including her nephew.

"People were trying to get to a place of safety because teargas fired by private security had been thrown into their homes," she told the commission.

"Sibahle wasn't aware in (what) direction we ran and was looking for us. A man later told me Sibahle had been shot," she said.

"When I got up to the area where he was last seen, I found his siblings holding him. I had never seen a person dying before — when I saw him, it looked like he was gasping for air."

She also said she saw a woman being killed while holding a two-month-old infant.

The hearings are expected to run through December 3.

Police, military and state security officials are among those expected to testify.

The aim is to determine the causes of the unrest, lapses by police, the role of private security companies, and alleged racial motivations to some of the killings.

"The unrest was characterised by the loss of life, the targeting of retail centres, malls, shops and other businesses, schools as well as transport systems," the commission said in a statement.

The commission has powers to investigate rights violations, and to recommend appropriate redress.

Adwoa Safo impersonation: Findings from our preliminary inve...
37 minutes ago

Acting Speaker Joewise throws out minority’s motion to overt...
52 minutes ago