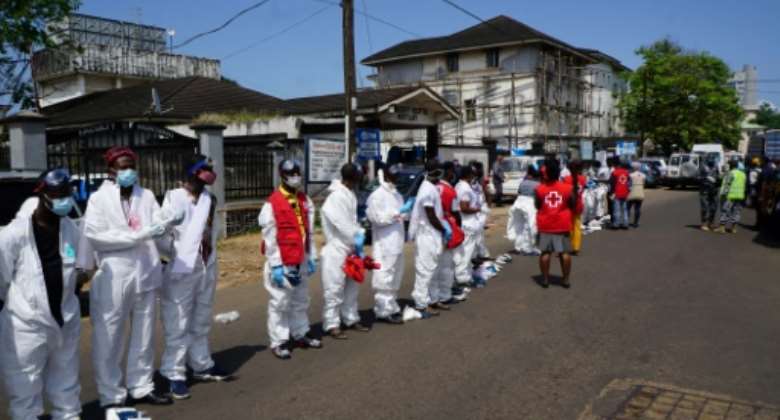 Health workers from Sierra Leone's Red Cross don protective suits ahead of a mass burial in Freetown two days after the massive fireball sparked by a fuel tanker explosion. By Saidu BAH AFP

Sierra Leone on Monday requested international medical aid for its overburdened hospitals in the wake of a fuel tanker blast in the capital Freetown that killed more than 100 people.

He said items such as perfusion fluids, material to dress wounds, bandages and painkillers were notably in short supply with hospitals already having delved into reserves.

Batima said some World Health Organization supplies had begun coming in as well as donations but that it was not enough.

"We are appealing to the international community for aid for medical equipment for the most serious cases," he added, saying hospitals were unable to cope with the workload with personnel working flat out since the blast.

According to latest data, at least 101 people were killed and a further 91 injured in Friday's explosion when a fuel tanker collided with another truck at a petrol station.

Witnesses say most of the victims were street sellers and motorcyclists who were engulfed in the flames as they tried to retrieve fuel leaking from the tanker before it ignited.

Thousands of people gathered to mourn amid tight security meanwhile at the Connaught Hospital morgue where most of the dead were taken. The stench of death hung over the building as the victims' loved ones sought to pay their final respects.

Lists of victims sent to other hospitals were posted outside the entrance to help direct relatives to the right facility.

"We are going to verify DNA of the victims of all the bodies ahead of burial to compile dossiers on all the dead," Sinneh Kamara, a medico-legal official, told AFP.

The government proposed to some families they bury their dead themselves rather than take part in a collective funeral that was scheduled for later on Monday.

President Julius Maada Bio on Sunday declared three days of mourning in the former British colony of 7.5 million people, the corruption-plagued country one of the world's poorest despite its diamond wealth.