No tilling, no chemicals in S.African farmer's revolution

By Linda Givetash and Griffin Shea in Johannesburg
South Africa 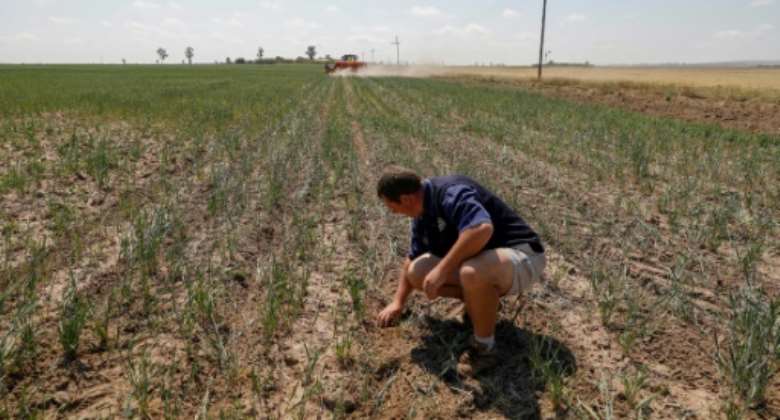 Danie Bester is a champion of 'regenerative farming' -- smarter use of crops and less tilling to help control weeds and retain soil moisture and nutrients. By Phill Magakoe (AFP)

It's spring in South Africa, and Danie Bester's tillers are rusting in a corner of his farm.

Freshly-turned earth stretches for miles on other farms as his neighbours prepare their fields.

He might sound like Aesop's grasshopper, wasting away the spring days while the ants next door work.

But he's actually made a radical decision to overhaul the way he farms, using techniques that are both better for his soil and for adapting to climate change.

"My seed beds are already growing, and my weed control is already going," he said. "So I don't have to do that amount, big amount of preparation, like the other guys are doing."

His farming style has a fancy name -- regenerative agriculture. But it's a simple idea.

Bester, centre, checks soy seeds ahead of planting on his 1,100-hectare spread. By Phill Magakoe (AFP)

Instead of dousing the fields with pesticides, installing irrigation systems and churning the earth with heavy tillers, Bester grows cover crops during the off season.

Cattle graze on the plants, dropping dung as added fertilizer on his 1,100-hectare (2,700 acres) spread, 90 kilometres (55 miles) southeast of Johannesburg.

The result: worms do the work of oxygenation that machines do elsewhere, while the untilled, shaded soil retains moisture and nutrients -- and weeds are kept under control.

His technique remains rare in South Africa, which has the most industrialised farms on the continent. Most use large-scale monoculture farming reliant on chemical fertilisers and pesticides.

But in addition to being climate-smart, Bester's corn and soy yields are among the highest in the country, earning him national awards that he hopes will inspire others to make the change.

"It's like a small seed you have to plant. The other guys start seeing the success (and) they will catch on," said Bester.

South Africa's climate is warming twice as fast as the rest of the world, according to experts, meaning changes to farming are crucial.

South Africa is already a dry country, and widespread irrigation is not a viable option.

Healthy soil: Bester says his fields are in better shape than on farms doused by chemicals. By Phill Magakoe (AFP)

Bester's fields are rich without artificial watering. He pulls out a stalk, revealing a bit of fungal growth and a wriggling earthworm -- creatures not found on farms doused with pesticides, he said.

"There are going to be challenges in the future that are not going to be solved by chemical agriculture," said Peter Johnston, a climate scientist at the University of Cape Town.

Across Africa, small farmers use traditional practices less damaging to the environment.

'Look into the future'

With a real pressure to improve harvests to feed growing populations, farmers are encouraged by agro-chemical companies to use particular seeds that require chemical pesticides and fertilizers, Johnston said.

Those methods can resist the changing climate, but at cost.

"Industrial agriculture traditionally always gets to the point where it doesn't really regard the soil as a resource anymore, the soil is just a holder for plants," Johnston said.

"That is not a holistic look at the way agriculture should be."

"We've got to get the soils back to what they were a hundred years ago. We've destroyed everything," Bester said. "The longer the soil will be healthy, the longer we will be able to produce food."

Bester's tillers are lying unused -- regenerative farming entails turning over the soil as little as possible. By Phill Magakoe (AFP)

Bester spent years testing his soil quality, managing his fields in blocks of five square metres (54 square-metres), and learning by trial and error.

The payoff isn't just high yields, Bester said, but ensuring the land will remain fertile for his two young children.

"You have to look really far into the future to make sure you're (making) the right decisions," he said.

Bester's neighbours are starting to catch on.

"It's only going to get worse if we don't change," he said. "We need to conserve now."