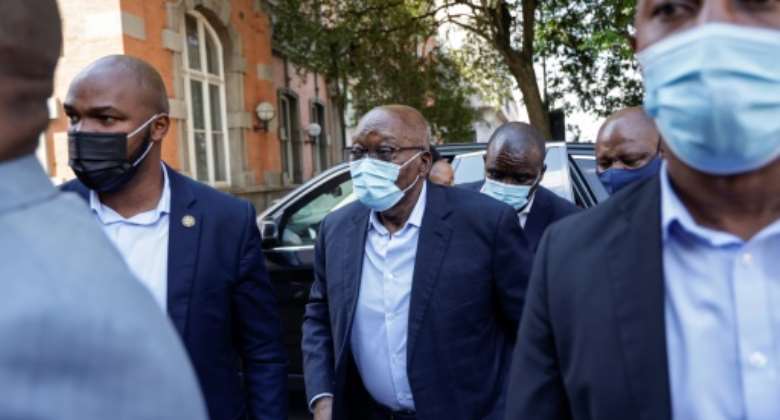 Zuma stepped briskly out of his vehicle and up to the building's entrance surrounded by security personnel. By Michele Spatari (AFP)

South Africa's ex-president Jacob Zuma on Thursday made his first public appearance since his release from prison on medical parole last month to lay charges against a chief state prosecutor.

Zuma walked into a police station in the eastern city of Pietermaritzburg, where he is on trial for corruption, to open a criminal case against advocate Billy Downer for allegedly leaking his medical records.

Zuma stepped briskly out of his vehicle and up to the building's entrance surrounded by security personnel, according to AFP reporters at the scene.

He was accompanied by one of his daughters and waved to people queueing outside the building as he walked past.

A small crowd of supporters gathered on the street, singing and dancing in Zuma-print t-shirts.

Aged 79, Zuma was released from prison due to ill health two months into a 15-month jail sentence for refusing to collaborate with a graft probe into his 2009-18 presidency.

He was hospitalised from prison and underwent surgery for an undisclosed ailment.

Critics accuse the ex-leader of using ill health as an excuse to further delay a drawn out corruption trial relating to a 1999 purchase of arms from five European firms.

Deputy president at the time, Zuma is accused of pocketing bribes from French defence giant Thales and faces 16 charges of fraud, graft and racketeering.

The trial kicked off this year after decades of postponements and delays.

Zuma wants Downer to recuse himself for allegedly sharing confidential medical information to the media.

The next hearing is set for October 26.

In July, Zuma was found guilty of contempt of court for snubbing a separate inquiry into mass looting of public funds during his rule.

His jailing sparked violent protests and looting in his home province of KwaZulu-Natal that spread to the financial hub Johannesburg in July, claiming over 350 lives.