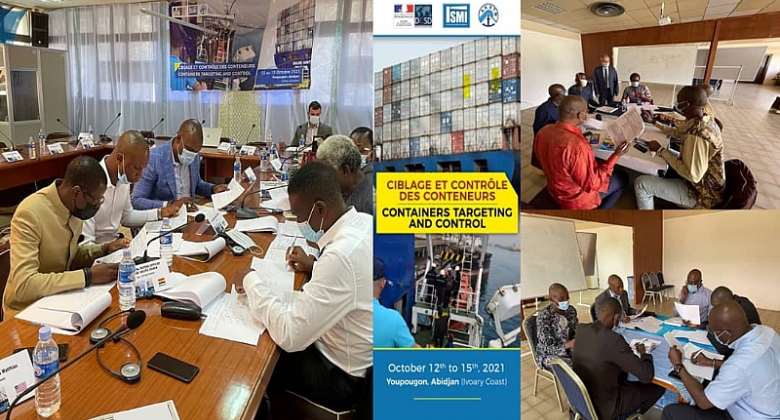 The Interregional Maritime Safety Institute (ISMI) of the Regional Academy of Marine Sciences and Technology (ARSTM) on Friday, October 15, 2021, concluded a seminar on cibling and control of containers.

The seminar according to ISMI Director Lieutenant Col. ABE Aké Lazare is to provide a framework for capacity building of structures and services in charge of collecting, analyzing and processing information to target risky operations on containers.

Speaking at the seminar, he applauded all participants for taking the step to have their capacities built as he urged them to learn as much as possible from the experts assemble.

“I would also like to thank all the participants in this training session. I hope that with the presence of distinguished experts and with your personal involvement in the training sessions, you will be sufficiently equipped for a more effective control of the flow of goods through our ports.

“Having said that, I would like to close my speech by wishing all the participants a fruitful training,” Lieutenant Col. ABE Aké Lazare said.

In his address, the ISMI Director extended appreciation to the Directorate of Cooperation, Security and Defense (DCSD) of the French Ministry of Europe and Foreign Affairs, represented by Mr. Roberto Lemos, Commissioner of the Armed Forces, in charge of maritime safety and security at the DCSD.

Taking his turn to speak at the seminar, Chief of Mission of the French Cooperation at ISMI, Col. Guillaume de Beauregard referenced how important containers have become in the shipment of goods in the sub-region and globally as well.

He however raised concern about the fraudulent activities associated with the practice. He said “current events regularly remind us that fraudulent traffic of all kinds is adapting at an impressive speed to the containerization of goods, starting with the trafficking of fake medicines. It is on this theme that the course wishes to put particular emphasis on this session.”

Col. Guillaume de Beauregard added, “I would also say that ISMI, particularly through the French cooperation, wishes to make its contribution to the fight against this traffic since this is the 3rd course on the same theme since 2018 (the 1st course took place in December 2018 and the other in March 2020). One of the conclusions that can be drawn from these previous courses is the absolute necessity to promote dialogue between the States concerned and within the different administrations. Trafficking feeds on the lack of communication between the administrations fighting against this scourge.”

He further stressed the need for representatives of the various states to take advantage of the seminar to exchange knowledge and good practices in terms of control and targeting of containers.

The seminar was organized and financed by the French cooperation with the help of the General Directorate of Customs and Excise with strong backing of the Ivorian State.

FIFA throws out SAFA’s protest case against Ghana after WC q...
19 minutes ago

Appropriate adequate funds for establishment of Ghana’s CDC ...
25 minutes ago