The golden boot award: the power of togetherness 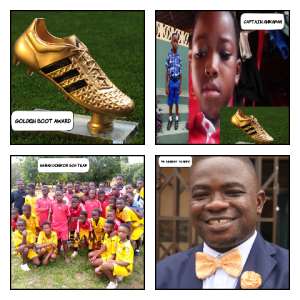 When the referee whistled for the commencement of the game staged on the Goka football pitch, all eyes were on two players - the captains of both sides. Between them, they've put a dozen balls passed keepers of the tournament, and with six goals each to their credits, Ankamah, the captain of the Sarah Donkor school team and Kwaku Pele leading the Demonstration school side were in contention to be crowned the goal king and be rewarded the golden boot after this final match.

The stakes were high, because both teams were well prepared to win the ultimate, and through the group stages to this very grand finale, no team gave them any fierce challenge. And battling it out finally for the trophy, what spectators and supporters of both sides showed interest in much was that of the goal king award.

The two keepers of both sides came into the match with a well prepared safe pair of hands, and consistently they denied the two goal poachers the winning goal they needed for the all important crown.

So, when the game went into recess for the first half interval, the Sarah Donkor school team got a visitor in their dressing room. He was their youthful headmaster, Mr. Twene Adu-Asare, himself a former footballer back at school. He'd approached the players to boost their morale, and psyche them positively to victory over their arch rivals. In his company was Mr. Ernest Kwarfo, also a former student of the selfsame Sarah Donkor school, and now working as a health personnel with the Korle-Bu Teaching Hospital in Accra, who also pledged additional reward to the players if they bring glory to his alma mater.

To the captain, Ankamah, the headmaster told if he's not getting the ball into the opponent's net due to how strictly he has been marked by the defenders, he should assist the other equally good strikers on his side to score and record the victory for the team.

Ankamah, back into the game worked to the headmaster's game plan, and five minutes into the second half, getting a ball near the corner line of the other team, dribbling two or three on-rushing defenders, captain Ankamah placed the ball in front of his deputy captain, Benedict, who rifled the ball into the Demonstration school team's net, placing the keeper off balance, to a thunderous jubilation by the fans of the Sarah Donkor school.

The game ended one goal to nil in favour of captain Akamah's side, Sarah Donkor school. They won the overall trophy for the school.

And Mr. Ernest Kwarfo in a jubilant mood splashed cash on the players as would confetti on newly wedded couples.

Then came the decider of the much fought for golden boot award. As the two captains had same goals, six each, the spectators wondered who qualified for the award, or if it was to be split evenly for the two, or another golden boot should be added to the existing one so they all get rewarded.

But the organisers of the tournament laid out the rules governing the game, saying, in such situations as both players having same goals, what separates them is the assists the two contenders have made to their teammates. Kwaku Pele who captains the Demonstration team was a selfish player, and he never assisted any of his teammates to score a goal since the commencement of the tournament to the very final stage.

And as mentioned earlier of Ankamah's assistance to Benedict in the final game that claimed victory for the Sarah Donkor school team, he was given the golden boot. And in his acceptance speech, he thanked his headmaster, Mr. Twene Adu-Asare for teaching him the need to work together as a team. His assist to his teammates has won him a personal glory in a golden boot and the overall cup or trophy of the tournament.

And adding a feather to the day's beautiful cap, Mr. Ernest Kwarfo gave scholarship to captain Ankamah, covering all his bursaries till he'll complete Senior High school, for the show of togetherness in achieving something worthwhile.

A united spider webs, (as said by the Goka people), can tame a prowling fierce lion.

If we work together, victory becomes ours in all assignment we undertake.

This story was sponsored by:

Now a Nurse at the Korle-Bu Teaching Hospital, Accra.