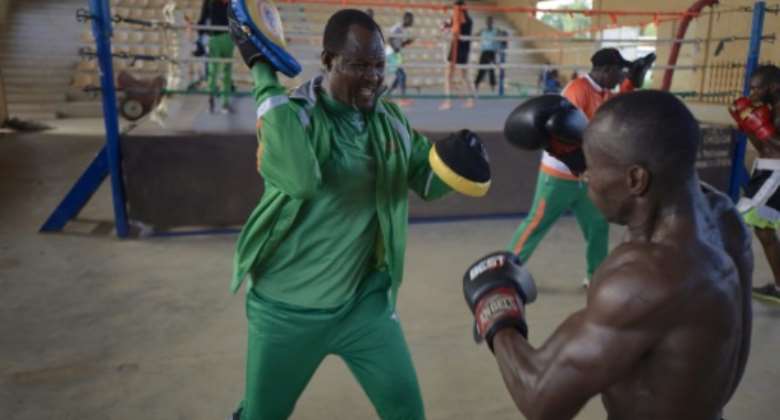 From the ringside, Niger's ex-heavyweight boxing champion Abdoul Aziz Ousseini, aka "Aziz", gives guidance to his young trainees at the boxing club in the capital Niamey.

Some 10 youths drawn from the city streets pull on their gloves and warm up. Close by, other amateur pugilists hammer a huge tyre suspended with rope.

Almost 50 years old and impressively weighing in at more than 100 kilos (220 pounds), the ten times heavyweight champion of Niger has turned to coaching future talent and giving purpose to disadvantaged youngsters.

The man who "discovered" boxing in 1998, when it was embryonic in the poor Sahel country, took US superstar Mike Tyson for his role model and today coaches youngsters on a voluntary basis.

"These are children who are neglected and who were using drugs from left to right, so on Saturdays and Sundays, I sacrifice my time for them," says Aziz, who wears a tracksuit in the national colours.

"The coach teaches us boxing (...) It is better to learn to box than to take up banditry in the street. Later we will teach others," smiles Moussa Issa, a committed trainee.

"A champion will emerge from the group," Aziz predicts with conviction.

In 2012, he already piloted a government programme supported by the United States and Spain, which benefitted about 40 such young people from two working-class neighbourhoods of Niamey.

While the former champion can count on a few local sponsors, he also provides private boxing lessons for Western expatriates to support his activities.

"Instead of giving me money, I sometimes ask them to bring me high-quality boxing equipment from their vacations in Europe," says Aziz, who works in a United Nations agency in Niamey.

The first professional boxer to hail from Niger, where traditional wrestling is the main combat sport, Aziz has known a degree of international success.

Aspiring professionals dream of making a career in boxing. By Michele Cattani (AFP)

Under the leadership of Jean-Marc Perono, former coach of two world champions, the French Hacine Cherifi and Fabrice Tiozzo, he won a record of five victories in five fights.

"Like my idol Tyson, I dominate in the ring!" he boasts from his imposing 1.88 metres (six foot two inches), showing off his gold medals.

"Aziz's success has breathed new life into boxing, which was struggling to shine," comments a connoisseur of the sport in Niger.

Retired since 2019 "because of the weight of age" and "lack of supervision" after the death of his mentor, Aziz today devotes his energy to the emergence of "young talents".

Beyond his investment on behalf of street kids, he also coaches six aspiring professionals who dream of making boxing a career.

"Sometimes it's them who come to pick me up at home" for training, he says, glad of such enthusiasm.

Ducking and diving during a training session. By Michele Cattani (AFP)

Success has already come. Moussa Sahabi, 22, has lifted three West African championship titles in the super flyweight (50-52 kg) and super bantamweight (53-55 kg) categories from the Heritage Boxing Entertainment (HBE) organisation, which aims to reach all nations in Africa and beyond.

"Before meeting Abdoul Aziz, I was so discouraged from boxing but he woke me up!" Sahabi says. "For my first bout, he mortgaged his car so that I could take part in the competition."

Sahabi would love to follow in the footsteps of boxer Issaka Dabore, the first Olympic medallist in the history of Nigerien sport, who won a bronze at Munich in 1972.

The young champion wanted to compete in the 2020 Tokyo Olympics, but was unable to participate in qualifying bouts due to travel restrictions imposed because of Covid-19.

"Sahabi can go further than where my dreams left off," Aziz predicts.