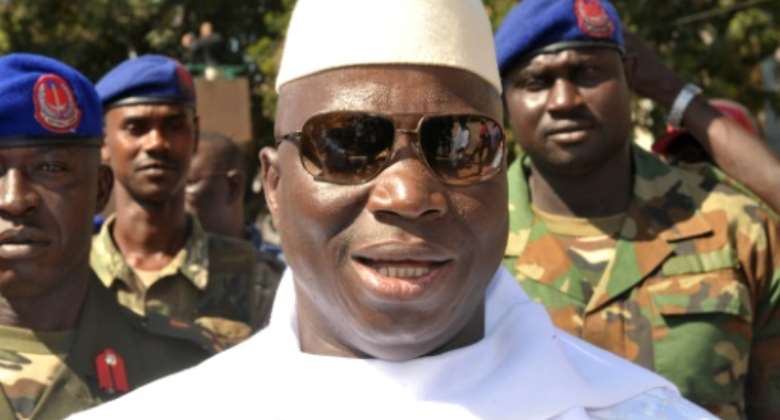 Yahya Jammeh was Gambia's longtime leader until his electoral defeat in 2016. By SEYLLOU (AFP)

The long-awaited findings of a probe into crimes committed under Gambia's former dictator Yahya Jammeh, which were to be released on Thursday, have been delayed, investigators said.

A panel called the Truth, Reconciliation and Reparations Commission (TRRC) had been scheduled to ceremonially hand over its findings to President Adama Barrow.

But the final report will now be released at a later date, a member of the TRRC told AFP, saying, "We are not yet ready."

The TRRC was set up in 2017 following Jammeh's defeat to Barrow in elections in December 2016.

After a six-week standoff that ended in military intervention by neighbouring countries, Jammeh flew to Equatorial Guinea.

Styled on the lines of South Africa's post-apartheid Truth and Reconciliation Commission, the TRRC heard testimony from nearly 400 people from January 2019 to May 2021 on Jammeh's 22-year dictatorship.

Witnesses gave chilling evidence about state-sanctioned torture, death squads, rape and witch hunts, often at the hands of the "Junglers," who acted as Jammeh's death squads.

Reed Brody, an American lawyer calling for Jammeh to be prosecuted, said the postponement was announced "to the frustration of victims."

The findings, spanning 16 volumes, had initially been due for release in July.

The TRRC has not been empowered to prosecute those responsible for crimes.

In its final report, it may recommend prosecution for perpetrators or propose an amnesty for those who have testified about their crimes and expressed remorse, except in the case of crimes against humanity.

Jammeh gained power through a bloodless coup in 1994 and was repeatedly re-elected, in votes often condemned as bogus, until his defeat to Barrow.

Jammeh supporters want the 56-year-old ex-dictator to return from exile.

But many in the poor nation of two million people have also called for him to be returned home for prosecution.

Barrow has long said he will await its report before seeking any further action against his predecessor.

After receiving the report, the government has six months in which to respond to its recommendations.

The postponement comes at a time when the tiny West Africa state is gearing for presidential elections on December 4 in which Barrow intends to run.

In early September, Jammeh's political party announced an alliance with the ruling party, a move that was condemned by watchdogs.

Rights groups fear that the alliance between the political parties of President Adama Barrow (pictured) and Yahya Jammeh could hurt the chances of justice being done. By Lamin KANTEH (AFP)

The Gambia Centre for Victims of Human Rights Violations said the teamup was a "threat to the government's implementation of the TRRC's recommendations," accusing Barrow of "abandoning grieving Gambian citizens to return to the arms of this murdering and raping tyrant."