By Susan Canney - The Conversation 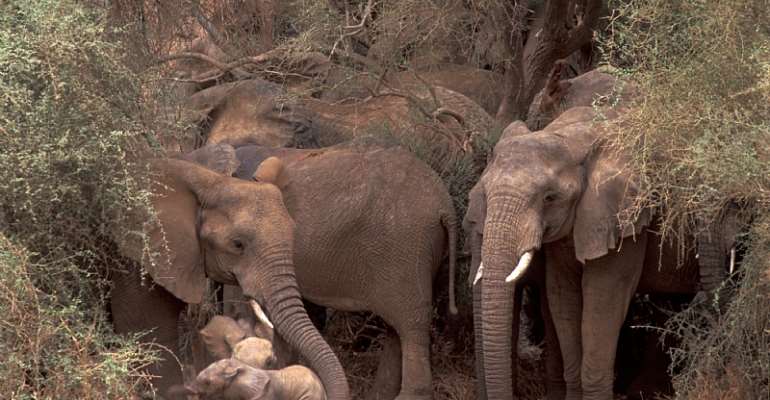 A herd of elephants in Mali. - Source: Carlton Ward Jr

The challenge of conserving wildlife while meeting the many needs of humans is a complex one. Some policymakers don't see how economies can grow while still making space for wildlife. Others understand that conservation must make space for people, but it's difficult to do in practice.

The issues involved in the coexistence of humans and wildlife are interconnected and can't be broken down into small, predictable, manageable parts.

Recognising the uncertainty that arises from multiple relationships could help to make conservation more effective.

An example is provided by the “desert-adapted” elephants of Mali. These 250 to 300 animals are among the last of an elephant population that once stretched across the Sahel. They're now reduced to tiny refuges due to the intrusion of human activities.

The Mali elephants have been excluded, since the 1970s, from the rich resources of the inner delta by increasing human pressure. And their numbers have almost been halved by the poaching that accompanied the lawlessness of the 2012 coup. These animals have adapted by migrating annually over a vast, arid area to follow the availability of water and food, and to avoid human activity.

Our work as the Mali Elephant Project began with three years (2003-2006) of studying the elephants and their migration to understand the threats. We did this using GPS collar data provided by Save the Elephants. But it was difficult to see how a small organisation with no resources could intervene over such a large area (about 32,000km2) which was inhabited by people.

A better understanding of local attitudes and livelihoods helped us see the problem as part of a complex social-ecological system. In turn, that suggested ways to promote sustainable change. The results have continued to surprise. And the insights gleaned may be of use in delivering the Post-2020 Global Biodiversity Framework and supporting the achievement of the Sustainable Development Goals .

Our work understood the threat to elephants to be as a result of a system of relationships between people and their living and non-living environments.

We looked for points in the complex system of relationships where a small action might make a big impact. The idea was to identify “assets” – aspects of the system that favoured the elephants – and link these to reinforce each other. Assets ranged from individuals, organisations, and features of the environment to laws and traditions. At the same time we wanted to diminish aspects that were a threat.

Clearing land for agriculture removed elephant habitat and obstructed access to water. This made crops vulnerable to trampling and hungry elephants. Ever-increasing numbers of cattle put pressure on water sources, soils and vegetation.

We found that local people valued Mali's elephants for multiple reasons – most strikingly because “if elephants disappear it means the environment is no longer good for us”.

People also understood that human activity needed to respect environmental limits. Yet despite this, the environment was clearly degraded and over-exploited.

Further in-depth studies found that 96% of the cattle in the study area belonged to distant wealthy urbanites. They invested in cattle and sent them into more remote areas to find pasture and water. Many other natural resources (such as firewood, charcoal, game and wild foods) were also harvested by urban commercial interests.

And although each ethnic group sharing the area had its own systems to manage natural resources sustainably, they were reluctant to respect the enforcement systems of other groups. The result was shared resources such as pasture and forest being depleted by individual users for their immediate benefit.

In 2010 the project brought together the local communities to discuss these findings. Once unified around a shared understanding of the problems, they proposed a solution that also respected the needs of elephants. Their solution was modelled on traditional governance systems. A committee of elders set the rules of resource use and teams of young “ecoguards” would patrol to ensure the rules were respected. The ecoguards also conducted activities such as building firebreaks and planting trees.

The protection of an area of pasture with firebreaks meant, for example, that abundant pasture was available close by. People could sell fodder and grazing or water access rights. Their own animals were healthier and more productive and valuable. The protection of forest from exploitation by outsiders meant wood, forage, wild foods, medicines and other forest products could generate income from schemes managed by women's associations. This approach was possible because Mali's decentralisation legislation puts natural resource management in the hands of local communities.

The conflict and lawlessness that have afflicted the area since 2012 presented huge challenges. The combination of a resurgence of Tuareg separatism, a military coup and a jihadist insurgency caused government to retreat from the north and centre of Mali.

Despite these challenges, applying a complexity perspective to a problem of elephant conservation helped address several problems simultaneously.

Elephants avoided areas where they were poached and where armed groups were present. This pushed them into more populated areas where we could use the model to mitigate conflict.

The approach helps elephants and humans to live together peaceably. It has also improved local livelihoods through more abundant natural resources. The collective nature of the solutions improved social cohesion because people had to work together to realise the benefits.

As one community ecoguard observed during a recent survey, “when you sit around the fire talking, having worked together all day, you realise that we all have the same problems”. It has also countered youth unemployment by providing socially respected occupations in the restoration of ecosystems and biodiversity.

The resilience of the project in the face of insecurity seems to have been achieved because it was rooted in local and inclusive systems to solve local problems.

The approach has relevance for the Post-2020 Global Biodiversity Framework to be agreed at the next Conference of the Parties to the Convention on Biological Diversity in 2022, and its aim for a shared vision of living in harmony with nature by 2050.