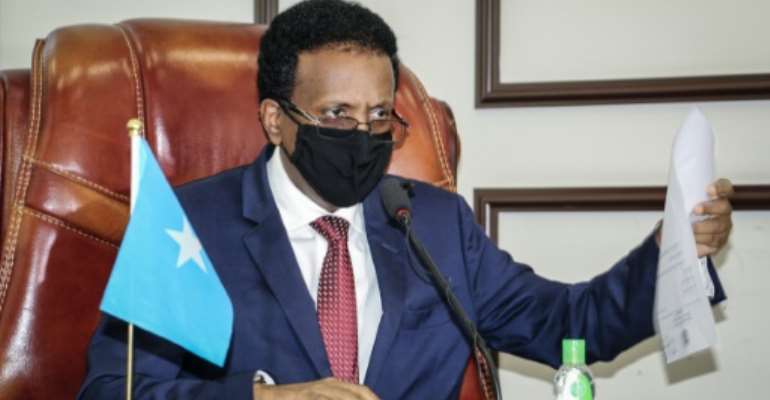 Somalia's President Mohamed Abdullahi Mohamed has been in power since February 2017. By - (AFP/File)

Somalia's regional leaders on Friday appealed to the president and prime minister to end their damaging feud, warning of the risk of political instability in the Horn of Africa nation.

The row escalated sharply on Thursday when President Mohamed Abdullahi Mohamed, who is popularly known as Farmajo, suspended the executive powers of Prime Minister Mohamed Hussein Roble -- a move swiftly rejected by the premier as "unlawful".

The two men have been at odds over top security appointments in a dispute that threatens to imperil repeatedly delayed elections and distract from efforts to confront a long-running Islamist insurgency.

Leaders of Somalia's five semi-autonomous states called on the protagonists to stop "exchanging statements," resolve their differences through mediation and respect the interim constitution.

"The presidents of the federal member states are concerned about the current conflict in Somali federal institutions which does not serve the public interest, leads to insecurity and political instability," they said in a statement.

The leaders of Jubaland, Southwest, Galmudug, Hirshabele and Puntland also urged electoral bodies to speed up the long-delayed polls.

Farmajo had announced that he was withdrawing Roble's powers, particularly the ability to hire and fire officials, until the election process was completed.

He accused Roble -- the man he appointed just a year ago -- of violating the constitution and taking "reckless decisions which can pave the way for political and security instability".

Map of Somalia. By (AFP/File)

Roble in turn lashed out at Farmajo, dismissing the move against him and accusing the president of seeking to sabotage the government's functioning.

He also instructed Somali "security forces not to intermingle with the politics", as the row raises the spectre of fresh violence erupting in Mogadishu.

The bitter power struggle became public last week when Roble sacked Somalia's spy chief over his handling of a high-profile probe into the disappearance of a young intelligence agent.

Ikran Tahlil, a 25-year-old officer with the National Intelligence and Security Agency (NISA), was abducted near her Mogadishu home in June, and her employers concluded that she had been killed by Al-Shabaab jihadists.

The militants issued a denial, while Tahlil's family accused NISA of murdering her.

Somalia has been struggling to hold elections for months.

Farmajo's four-year mandate expired in February, but was extended by parliament in April, triggering deadly gun battles in Mogadishu, with some rivals viewing it as a flagrant power grab.

Roble cobbled together a new timetable for elections, but the process has fallen behind, and on Thursday he accused Farmajo of trying to foil the voting process.

Elections in Somalia follow a complex indirect model, whereby state legislatures and clan delegates pick lawmakers for the national parliament, who in turn choose the president.

The next phase is scheduled for October 1-November 25 with elections for the lower house of parliament, but voting has yet to take place in some states for the upper house as previously scheduled.

Analysts say the impasse has distracted from Somalia's larger problems, notably the Al-Shabaab insurgency that was unleashed in 2007.

The Al-Qaeda allies were driven out of Mogadishu a decade ago but retain control of swathes of countryside and continue to stage deadly attacks in the capital and elsewhere.

"Somalia's factions are playing with fire. All sides need to de-escalate," the International Crisis Group said in a report issued earlier this week.