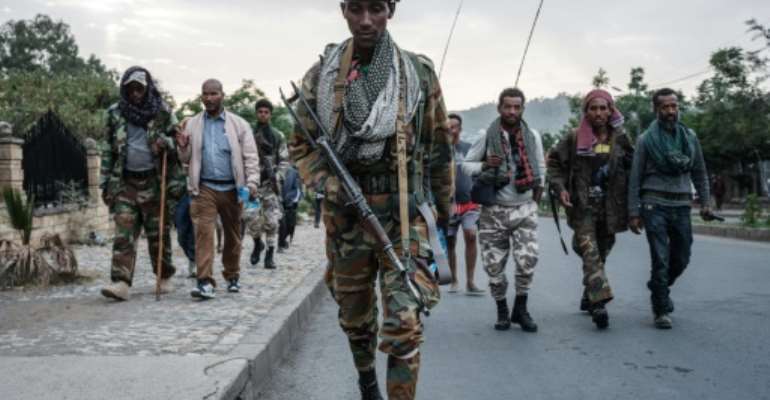 Tigrayan rebels seized the regional capital Mekele in late June in a stunning turnaround in the conflict. By Yasuyoshi Chiba (AFP/File)

Rebels from Ethiopia's war-hit Tigray killed at least 125 residents of a village in the neighbouring Amhara region earlier this month before being driven out by pro-government forces, doctors said Wednesday.

"There were 125 dead in Chenna village... I saw the mass grave myself," Mulugeta Melesa, head of the hospital in nearby Dabat town, told AFP.

He said residents were "still searching for dead bodies around the area and counting is still going on".

Northern Ethiopia has been wracked by conflict since November when Prime Minister Abiy Ahmed sent troops into Tigray to topple the regional ruling party, the Tigray People's Liberation Front (TPLF), a move he said was in response to TPLF attacks on army camps.

Though the 2019 Nobel Peace Prize winner vowed a swift victory, fighting has dragged on for months, with myriad reports of massacres and other rights abuses.

In June, in a stunning turnaround in the conflict,the TPLF retook Tigray's capital Mekele and federal forces largely withdrew.

Since then the TPLF has launched offensives into neighbouring Amhara and Afar regions, displacing hundreds of thousands of people and triggering allegations of summary executions and indiscriminate shelling.

The TPLF has denied those charges, insisting it is merely trying to break what it describes as a humanitarian blockade on Tigray and prevent pro-government forces from regrouping.

TPLF officials could not immediately be reached for comment Wednesday.

The rebels then shot dead civilians over multiple days in early September before retreating, he said.

At least some of the wounded were taken to the university hospital in the city of Gondar, which lies to the southwest of Dabat.

"The dead bodies are not coming here but there are some wounded civilians here," said Ashenafi Tazebew, the Gondar hospital's vice president.

"We have received close to 35, 36 civilians but I am not sure they are all from the Chenna massacre. Most of them have gun wounds," he said.

"Some of them, their families are already dead and they are asking to go to the funerals" even though they need treatment, he added.

The 10-month-old war in northern Ethiopia has already caused immense human suffering in and beyond Tigray, with UN officials warning that 400,000 people face famine-like conditions.

Tigrayan leaders said Monday that 150 people died of starvation in August and warned that one million "are at risk of fatal famine if they are prohibited from receiving life-saving aid within the next few days".

Those figures could not be independently verified.

The TPLF has accused Abiy's government of imposing an aid blockade since then, and the UN, the African Union and world powers like the United States have repeatedly called for expanded humanitarian access.

At a press briefing Monday however, Ethiopia's peace minister Muferiat Kamil reiterated the government's position that the TPLF is to blame for obstructing aid deliveries.

"It's TPLF who is choking the checkpoints, the humanitarian corridor, it's not us," she said.

The World Food Programme (WFP) on Tuesday hailed the arrival of more than 100 trucks carrying food and other aid into Tigray, the first such convoy to arrive in two weeks.

Aid officials have repeatedly said 100 trucks need to be reaching the region each day to meet the massive needs on the ground.

"Although we have not yet been able to independently verify hunger-related deaths, we have received unconfirmed reports of deaths in displacement sites and we are gravely concerned regarding the life-threatening situation faced by millions of people in Tigray and neighbouring regions," Saviano Abreu, a spokesman for the UN humanitarian coordination office, told AFP Wednesday.

"It is extremely worrying that some supplies have not been able to enter at all, including fuel, without which we are unable to continue our operations," Abreu said.

He called for unimpeded access and warned that "the consequences of inaction are beyond reckoning".