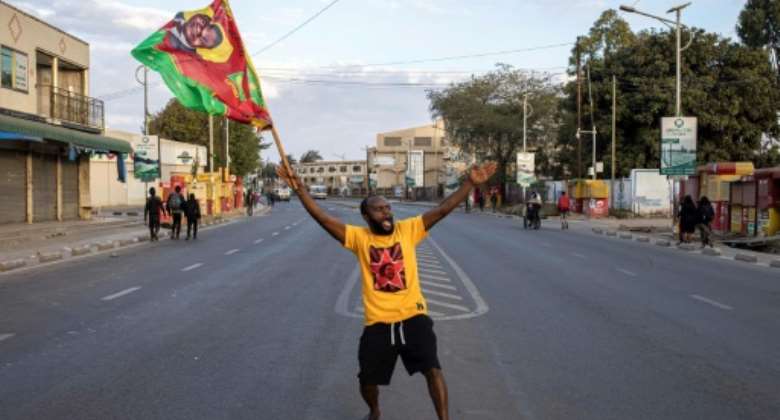 Zambia's newly-elected leader Hakainde Hichilema was sworn in on Tuesday after a comprehensive election victory hailed as a rare triumph over authoritarianism and a milestone in African democracy.

Hichilema, 59, took the oath of office before thousands of jubilant supporters gathered at the Heroes Stadium in the capital Lusaka, sporting the red and yellow regalia of his United Party for National Development.

Many had spent the night at the venue to secure a seat. They cheered ecstatically as Hichilema stepped out of a white SUV in a face mask, dark suit and red tie, waving white-gloved hands as his security team struggled against the crowd.

"I, Hakainde Hichilema, do swear that I will faithfully and diligently perform my duties... in this high office," he declared, Bible in hand, as the packed stadium clapped and roared.

On his sixth bid for the presidency, Hichilema defeated the incumbent Edgar Lungu, 64, by almost one million votes -- a landslide spurred by economic hardship and restricted freedoms under the previous regime.

The victory is the 17th opposition win in sub-Saharan Africa since 2015.

It occurred despite restricted campaigning and suspected rigging in favour of Lungu's party.

Faceoff: The August 12 vote was the third time that Hichilema, left, had faced off with Lungu, right. By Gianluigi GUERCIA, PHILIPPE WOJAZER (AFP/File)

Voter turnout on August 12 was nearly 71 percent, and many Zambians queued late into the night to cast their ballots.

But the incumbent's popularity was sapped by unsustainable infrastructure spending that plunged the copper-rich southern African nation of over 18 million inhabitants into debt default.

The local kwacha currency plummeted and inflation rose over 24 percent, rendering basic goods unaffordable in a country where more than half the population lived in poverty before the pandemic.

"We have now put him to rest and let him rest in peace," he told AFP, adding that he had been waiting at the stadium since 4 am.

Among the guests were opposition politicians from the region as well as former and current African leaders, including the presidents of Democratic Republic of Congo, Kenya, Nigeria and South Africa.

But he warned that the Zambian scenario could also have the "perverse effect" of encouraging African "tyrants" to "rig harder".

They capitalised on social media use, engaging with Hichilema and his party online and coining hashtags such as #BallyWillFixIt, despite an opposition blackout by government media.

"Africans are becoming more conscious, active and critical," said Ringisai Chikohomero, a researcher with the Pretoria-based Institute for Security Studies.

Galamsey fight: Godfathers have disowned their child but wil...
18 minutes ago