Commemorating Slave Trade and its Abolition: 23rd August-Lest we forget

...“A people without knowledge of their past history is like a tree without roots” — Marcus Garvey 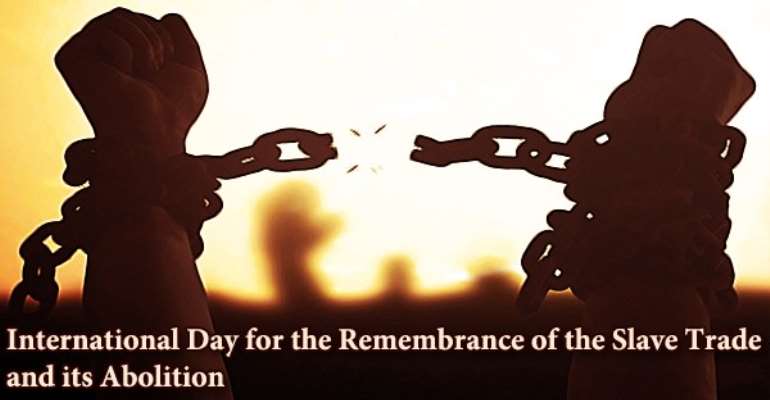 A conscious effort by the United Nations Educational, Scientific and Cultural Organization (UNESCO) to inscribe the tragedy of the slave trade in the memory of all peoples, moved its Executive Board to adopt Resolution 29 C/40 at its 29th session, Paris, 21 October to 12 November 1997, declaring August 23 as the International Day for the Remembrance of the Slave Trade and its Abolition. According to UNESCO the day is an “opportunity for collective recognition and focus on the historic causes, the methods and the consequences of slavery. ”

This year’s commemoration is under the theme: “Ending Slavery's Legacy of Racism: A Global Imperative for Justice”. By this theme, UNESCO is seeking to highlight “the importance of educating about the history of the transatlantic slave trade and slavery, to bring about an acknowledgement of slavery's impact on the modern world, and action to address its long-lasting effects.”

It was on the night of 22 to 23 August 1791, in Santo Domingo (today Haiti and the Dominican Republic) that the slaves started an uprising that would play a crucial role in the abolition of the transatlantic slave trade. That explained the choice of August 23 for the commemoration of the Day every year.

The Secretary General of the United Nations, António Guterres, in his address on this occasion, said, among others, that though the transatlantic slave trade ended centuries ago, the ideas of white supremacy that underpinned it remain alive. He added “We must end the legacy of this racist lie.”

The Transatlantic slave trade, that transported an estimated number of 10 to 12 million enslaved Africans across the Atlantic Ocean to the Americas from the 16th to the 19th century, was, indeed, exceptionally dehumanizing. It “was notorious for its brutality and for the overcrowded, unsanitary conditions on slave ships, in which hundreds of Africans were packed tightly into tiers below decks for a voyage of about 5,000 miles (8,000 km).”

The Transatlantic slave trade has consigned the African continent into the background and transformed its peoples as “beast of burdens” respectively. Since its advent, Africa has become the major source of raw materials and human resources for the advancement of other continents. That slave trade has been metamorphosing to adapt to new situations while Africa’s normal developmental processes came to an abrupt end and its peoples disoriented, only at the services of their masters.

It is worth to note that before the dawn of the dehumanizing transatlantic slave trade, Africa was not a hopeless place neither its peoples were second class humans. Undeniably, as far as back the 12th century, the Mali empire, for example, had a constitution known as the Mande Charter. Africans were mindful and respectful of the role and rights of everybody in the society. This is illustrated in the Mande charter which stated, for example, in its articles 9 and 16 respectively that “Children’s education behoves the entire society. The paternal authority, in consequence, falls to everyone” and “Women, apart from their every occupation, should be associated with all our management”. Having such constitution at that time (1236) suffice to demonstrate how African societies were advanced and civilized.

The point is why Africa ceased to work is mind-boggling. Africans have been confined into a socio-economic-political and cultural milieu destined to contain them in such manner that they can only act and obey the diktats of the others. They have been cut off their rich and diverse “backward” cultures to embrace the “civilized” ones of others. Centuries has passed and Africa is still terribly lagging behind in all areas of development and the people miring in abject poverty. Is Africa doomed? The answer is no. It is, only, time for Africa to come out of that Machiavellian setting and espouse, basically, its various endogenous governance systems while taking advantage of positive aspects of foreign governance systems.

Today as the world is confronted with the covid-19 pandemic, Africa is left alone to endure the dire hard consequences of this terrible disease as the continent cannot access the necessary vaccines for its peoples. Former United Kingdom Prime Minister Gordon Brown is reported to call for the world’s richest nations to underwrite COVID-19 vaccination in poorer countries. According to the report, Mr. Brown, who is the UN’s Special Envoy for Global Education, said inaction will only lead to greater global division. He was quoted saying that “By our failure to extend vaccination more rapidly to every country, we are choosing who lives and who dies”, he warned. He further said “And I say the world is already too deeply divided between rich and poor to allow a new unbridgeable divide to become entrenched between the world’s vaccinated who live, and the under-vaccinated who are at risk of dying.”

The covid-19 pandemic has brought to the fore in a more glaring manner the division of world between the rich who “deserve” living and the commonness who must be sacrificed. Africa, the cradle of humanity, abundantly engorged with material and human resources should be able to overcome the challenges it is facing. It is the responsibilities of African leaders to lift the continent from its doldrums through selfless, uncorrupted and committed leadership skills.

As we are honouring the memory of the victims of the slave trade and slavery, we are equally calling for the end of human exploitation and the recognition of the equal and unconditional dignity of each and every individual on Earth.

All for African unity!